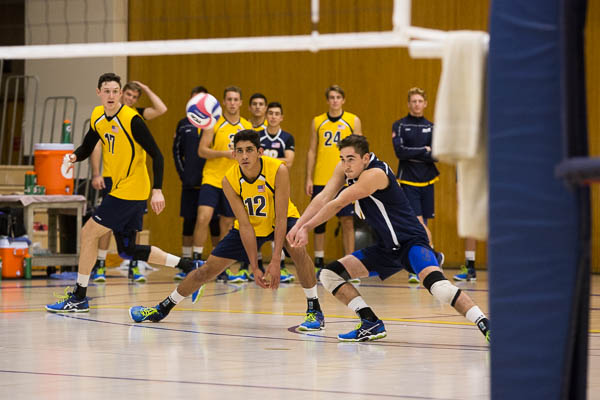 Corey Chavers and Hayden Boehle both lean in to pass the ball. Dustin Harris/Daily Nexus

The last game, Saturday night against Sacred Heart, was Head Coach Rick McLaughlin’s 100th victory with the program since his arrival in 2008, including a trip to the NCAA championship game in 2011.

“I didn’t know until they announced it,” said McLaughlin. “It makes me feel old. But really, I’ve had a lot of great players. It’s been fun.”

The team’s returning stars, Jacob Delson and Jonah Seif, performed at their usual level. Against Quincy, Delson tied his season high in kills with 16, and Seif posted a season high 48 assists.

The tournament opener, however, was the Gauchos’ closest match of the weekend. After jumping out to a quick 2-0 lead, fortunes tilted in the Hawks’ favor, although the home team was able to squeak out a close 5-set victory.

“Against Quincy, we were up 2-0, got complacent and before we knew it we were in a fifth game,” McLaughlin said. “The biggest thing is staying focused mentally for the entire match.”

The players felt the same way going into the fifth set and were confident that they would be able to turn things around.

“After the fourth set we told each other that we have to win this game,” said opposite Matt Marsh. “We’re the better team so we have to figure this out. Luckily we came out with energy.”

Marsh, a redshirt junior, missed the vast majority of last year due to injury, and is having a breakout year since returning. He has registered 59 kills thus far this season, second on the team behind Delson. Against NJIT, Marsh hit for a career high 16 kills on an astonishingly efficient .591 hitting percentage.

In addition to the explosive Marsh-Delson combo, UCSB received a timely boost from redshirt freshmen duo Connor Drake and Henri Cherry, who made their competitive debuts for the Gauchos in the Quincy game. The two split time at middle blocker and each played in every set of the tournament.

“It’s early in the season and we have some guys who are just starting to get their feet wet out there and they’re learning fast,” said coach McLaughlin.

The pair tallied 36 kills in the three matches, providing a nice offensive supplement to the leading upperclassmen. Despite the minimal experience that Drake and Cherry have, they will be tasked with anchoring the middle of the court for UCSB entering league play.

“The next string of games we’re starting actual league, so we’re competitive and ready to take on any team,” said Marsh.

The Gauchos travel south for their first league game of the season this weekend against UC San Diego, followed by another non-conference clash with rival UC Irvine.