Despite recording a season-high 18 steals, the UCSB women’s basketball team’s lack of size in the paint proved to be costly as it was outrebounded 24-40 in its 79-51 loss to Oregon. While the Ducks recorded 27 turnovers, the Gauchos followed behind Oregon with 21 of their own. 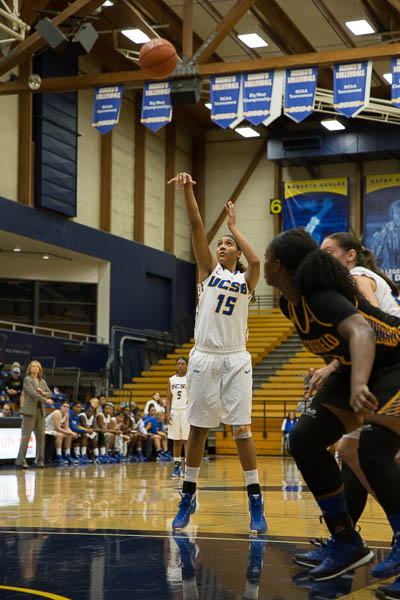 Oregon also recorded a season-high eight blocks and contained UCSB to shooting percentages of 31 percent from the field and behind the three.

After recording her first career double-double with 13 points and 16 rebounds in Santa Barbara’s home opener last Thursday, freshman forward Kali Jones struggled to follow up her stellar performance. She finished 0-6 from the field and had six rebounds in 24 minutes of play.

Filling in for Jones was sophomore forward Chaya Durr who scored 11 points on 5-7 shooting and had three steals but was undersized against the Ducks’ interior.

Its third road game in four games, UCSB sits at 1-3 overall after the loss. Beating Hampton 86-51 last Thursday, Oregon’s win over the Gauchos improved its overall record to 3-0, its best start since 2011.

Alleyne registered her 72nd career double-double, finishing with a game-high 15 points and 13 rebounds. She shot 3-6 from the field but scored nine of her 13 at the free throw where she made 9-12. Vandenberg added 14 points on 7-9 shooting to go along with eight boards.

In addition to the Ducks’ size down low, they were spot on from long distance. Oregon drained 50 percent of its shots from three-point range, making 8-16 beyond the arc.

Oregon’s commitment to the perimeter shot was established early as freshman guard Maite Cazorla scored the Ducks’ first basket of the game, sinking a three-pointer. Her only points in the first quarter, Cazorla tallied half of her game-high 10 assists in the period. Oregon registered 22 assists while UCSB finished with 11.

The three-point field goal prompted the Ducks’ 14-2 run, signaling they were in route to another lopsided victory. But the Gauchos responded with a 9-0 run of their own as a three-pointer by freshman guard CoCo Miller helped bring UCSB within three at 11-14.

Miller finished with 10 points on 3-10 shooting, 2-7 from behind the three-point line and added three steals.

UCSB’s three-point deficit would be the closest it came within Oregon’s lead for the remainder of the game.

Still, as Oregon attempted to increase its lead to double figures, the Gauchos continued to chip away at the Ducks’ lead. Trailing 14-21, two quick baskets by senior guard Jasmine Ware helped UCSB to trim Oregon’s lead to 23-18, forcing a Ducks’ timeout.

Ware finished with a team-high 12 points and tied her career-high of five steals. Her basket with 6:24 remaining turned out to be UCSB’s last before being held scoreless for nearly the next three minutes of the quarter. Oregon’s 6-0 run during the Gauchos’ scoring drought resulted in it taking its first double figure lead at 29-18, causing UCSB to call a timeout.

A three-pointer by senior point guard Dioseline Lopez at the 3:40 mark ended UCSB’s scoreless streak but wasn’t enough as Oregon held the Gauchos to another scoreless streak to go on an 8-0 run. Ending Santa Barbara’s scoring slump was junior point guard Onome Jemerigbe’s three-pointer with 30 seconds remaining in the first half as Oregon entered halftime with a 37-24 lead.

After combining for 12 points in the second quarter, Oregon’s duo of Alleyne and Vandenberg helped extend the Ducks’ lead in the second half, scoring 11 of the team’s 23 points in the third quarter. Alleyne emerged for seven points, helping Oregon take a 60-43 lead at the end of the quarter.

Contributing to Oregon’s 57.4 shooting percentage was senior guard Lexi Petersen. Despite a game-high seven turnovers, she scored 14 points on 6-9 shooting and was 2-4 from long distance.

Oregon saw a decline in its perimeter shooting in the second and third quarters, going 0-6 from downtown but redeemed itself. It exploded for an 83.3 three-point percentage in the fourth quarter on 5-6 shooting from deep.

The three-point shooting clinic resulted in the Ducks outscoring UCSB 19-8 in the final quarter. Between the time span of 4:58 through 3:07 remaining in regulation, they knocked down four consecutive three-pointers which led to their 79-51 victory.

Santa Barbara returns to the Thunderdome this Tuesday, Nov. 24th to host University of Texas, Rio Grande Valley at 7:00 p.m. The Vaqueros enter Santa Barbara with an overall record of 3-2. It will be the first time the Gauchos and Vaqueros have ever faced each other.