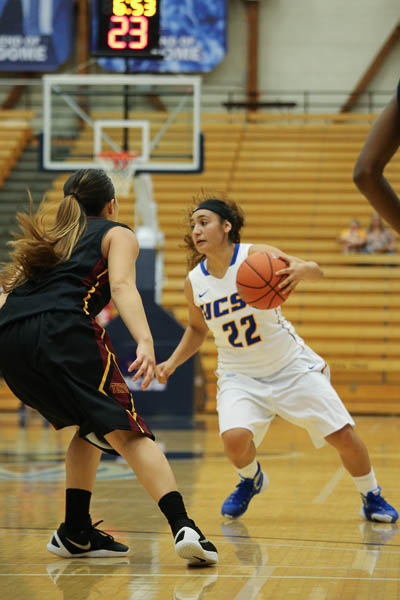 The UCSB women’s basketball team returns to Santa Barbara for its home opener this Thursday versus Cal State Bakersfield, but will be right back on the road to Oregon on Sunday.

Santa Barbara sits at 0-2 overall after lopsided losses to begin the season. Both the Gauchos and Roadrunners will be battling for their first wins of the season as CSUB is coming off having its 22-game home winning-streak ended in its 80-74 loss to Pacific last Friday.

However, the Ducks made a shocking statement in their season opener with an upset victory over North Carolina on the road that knocked the Tar Heels out of their No. 22 ranking to start the year. Now 1-0 overall, the 79-77 triumph even earned Oregon one vote in the AP Top 25 rankings.

UCSB hopes to avenge its 74-64 loss to Cal State Bakersfield last season. Despite a career-high 16 points from junior guard Onome Jemerigbe, outshooting the Roadrunners 48.1 percent to 42.9 percent and double figure scoring from two other Gauchos, Santa Barbara still fell short. The Roadrunners shot lights out from three, making 52.4 percent of their long distance attempts to earn the come from behind victory.

Fortunately for UCSB, former guards Brooklynn Hinkens and Tyonna Outland, the duo that scored 32 of the Roadrunners’ 74 points, are no longer with the program after graduating.

But the Gauchos will have new concerns with defending senior forward Batabe Zempare. Not much of a scorer, having averaged just 9.5 ppg last season and eight in last year’s meeting against the Gauchos, she tallied 19 points on 52.9 percent shooting in the Roadrunners’ season opener.

While her role on the team will include more scoring, Zempare is most effective in the paint when crashing the boards. Alongside her 19 points, she also recorded 19 rebounds for her first double-double of the season.

Cal State Bakersfield’s all-time leader in career rebounds entering her senior year with 813, Zempare’s team and conference high of 9.9 rebounds per game last season ranked 38th in the nation. Additionally, she led the WAC and Bakersfield with 14 double-doubles which ranked 27th in the country.

The Roadrunners’ loss of two veteran guards could be beneficial for the Gauchos and their backcourt of seniors in Jemerigbe and Jasmine Ware, who scored 12 against CSUB last season. Although Ware fouled out late in the game, the two combined shot 12-for-20 from the field.

Toning down the team’s average of 20 turnovers per game will be most important, especially against Bakersfield, who recorded eight steals against Pacific.

Sunday’s matchup will be the Gauchos’ second meeting against a Pac-12 opponent this season.

They face a greater challenge in Oregon, who has proven so far that there is no single strategy to containing their offense.

The Ducks made 50.8 percent of their shots and were able to upset North Carolina with its tremendous perimeter shooting, making 13-of-29 attempts for a 44.8 three-point percentage.

Four players scored in double figures in Oregon’s season opener, and leading the way was sophomore guard Lexi Bando. She scored a team-high 18 points, tallying 12 of her points from beyond the arc on 4-for-8 shooting from deep.

Helping create these opportunities on the perimeter is the Ducks’ length in the paint. Rebounding the ball for Oregon are forwards senior Jillian Alleyne and redshirt junior Jacinta Vandenberg.

Vandenberg, a transfer from Fresno State, sat out last year as a redshirt and is still finding her role within the Oregon system as she only played 20 minutes in the team’s first game.

With a double-double of 12 points and 13 rebounds in the upset of North Carolina, Alleyne is the leading force in the Ducks’ frontcourt. Entering this season, she ranked No. 16 in the ESPNW preseason list of top-25 players in the nation.

Named an AP third-team All-American for the 2014-15 season, her streak of 21 double-doubles from her sophomore through junior seasons, is the third longest in NCAA history and is a Pac-12 and program streak record.

She also holds single-season records for the conference and program in rebounds (519), double-doubles (29) and her 27 rebounds versus Portland State as a freshman is the most in a game in both Pac-12 and school history.

Alleyne’s career achievements earned her invitations to the USA junior team camp tryouts in 2013 and World University Games and Pan-Am Games camp in 2015.

UCSB has been outrebounded 97-75 in its last two games this season. Despite being undersized in the paint, Santa Barbara must find a way to be aggressive with boxing out and outhustling the Ducks for rebounds.

Thursday’s home opener on Nov. 19th versus CSUB begins at 7:00 p.m. in the Thunderdome. UCSB will travel to Oregon to face the Ducks this Sunday, Nov. 22nd in Matthew Knight Arena at 12:00 p.m.