Despite Sunday’s 70-67 exhibition loss to Cal State Dominguez Hills, it was an encouraging start for the UCSB women’s basketball team. While it was a satisfactory performance by the Gauchos’ starting unit, scoring 24 points on 7-of-23 shooting from the field, it was a spectacular game for UCSB’s supporting cast off the bench.

Santa Barbara’s bench scored a total of 43 points. Leading the Gauchos’ group of reserves was freshman forward Kali Jones. In her collegiate debut, Jones sunk 11-of-12 shot attempts for a field goal percentage of 90 percent, scored 22 points and snagged a game-high eight rebounds in 29 minutes of play. 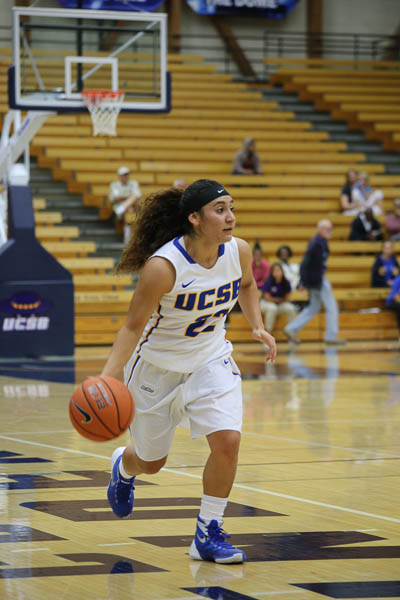 Yet, overshadowing Jones’ stellar play was the team’s 22 turnovers and 11-of-21 shooting from the free throw line. In spite of its 37-36 lead at halftime, the Gauchos’ multitude of turnovers proved to be costly in the game’s outcome.

“Sometimes your offense becomes their offense,” Head Coach Bonnie Henrickson said. “When you turn it over at the free throw line and at the top of the key, then that’s their offense. We did that too much and were kind of sloppy, we just have to be more discipline and fundamental.”

The Toros were small in the paint and UCSB made sure it dominated. At six feet two inches, Jones capitalized on CSUDH’s lack of size in the front court, posting-up and backing down defenders for quick turnaround layups.

In order to improve its interior defense, Dominguez Hills switched between a full-court press and 2-3 zone. While Jones periodically scored some baskets down low, the Toros’ defensive adjustment was beneficial. It forced UCSB to shoot from the perimeter, an unsuccessful aspect of the Gauchos’ shot selection. Santa Barbara shot 25 percent from long distance, going 4-of-16 from behind the three.

“It pushed us out wide,” Henrickson said. “We needed to be able to go downhill and instead of playing it East-West, our zone offense needed to go North-South. It was a zone, but their [Dominguez Hills] ball pressure felt like man.”

Eventually the “small ball” lineup of Dominguez Hills prevailed, outscoring UCSB 20-12 in the third quarter. With 2:09 left in the period, CSUDH went on an 8-2 run to take a 56-49 lead to head into the fourth quarter.

Knocking down one of the two three-point field goals during the Toros’ run was senior guard Breanna Garcia. The score was the stimulus to her four consecutive baskets in the fourth quarter’s opening. Her scoring rally helped CSUDH take a 10-point, 65-55 lead with 06:12 left in regulation. Garcia ended with a game-high 24 points on a 10-of-16 shooting afternoon.

With 4:58 remaining in the fourth quarter, junior point guard Onome Jemerigbe drained a clutch three-pointer to establish the Gauchos’ comeback surge. She registered six points while finishing with a game-high of nine assists, tying her career-high.

A missed three-point attempt by Toros’ junior guard Imari Brown set UCSB up with its last attempt at either a win or tie.

As UCSB looked for Jones in the paint for the game-tying bucket, the Toros’ defense forced senior shooting guard Jasmine Ware to settle for a missed three-pointer with 41 seconds left in the game.

The missed attempt led to the Gauchos having to intentionally foul, sending Dominguez Hills to the free throw line. A missed free throw by Dominguez Hills’ redshirt junior guard Femi Hamilton kept UCSB within three, down 65-68.

A timeout helped give Santa Barbara time to draw up a play that freed up Jones in the paint for an easy layup that cut the Toros’ lead to one at 68-67.

Another UCSB foul placed senior guard Monay Lee at the free throw line as she made both to give Dominguez Hills a 70-67 lead. She finished with 16 points and two steals. The Toros sunk 69.2 percent of their free throws, making 18-of-26.

With no timeouts and five seconds remaining, it left UCSB with no other option than to go for the game-tying three. Unable to find Jemerigbe, Ware or Miller for the last shot, junior forward Mi’Chael Wright ended up taking the three-point attempt that bounced off the cylinder of the rim and resulted in the Gauchos’ 70-67 loss.

While UCSB’s bench outscored its starting lineup, Henrickson knows that it is going to take more than scoring for the Gauchos to earn victories.

“I don’t have favorites,” Henrickson said. “At the end of the day, it’s about production. Be a better screener, weak side help, spread the floor, defensive transition, be a better rebounder on both ends of the floor. Most people think it’s about scoring, it’s not. Think about all the ways you can win a game that require no talent. If we buy into that, it’ll just increase our chances to be successful.”

In spite of falling short, the exhibition loss does not blemish the Gauchos’ overall record as they prepare for their season opener this Friday, Nov. 13th at Washington St. at 8:30 p.m.