The Daily Nexus
Volleyball
Inability to Close Sets Leaves Gauchos Frustrated with Losses to UCI & UC Davis
November 9, 2015 at 12:33 am by Sean White

The chance to avoid its first losing conference record since 2008 has diminished for the UCSB women’s volleyball team after losses to UC Irvine and UC Davis this past weekend. Despite falling behind in the first set, Santa Barbara scrapped its way back into the match by earning the equalizer for a 1-1 tie but the Anteaters managed to prevail for the 3-1 victory in sets of 25-13, 23-25, 25-23, and 25-23. Winning in straight sets of 25-19, 25-18 and 25-14, UC Davis swept the Gauchos for the second time this season.

“We have too many followers on our team,” Head Coach Nicole Lantagne Welch said. “We need some people to say ‘look at me, this is what we’re doing and we’re doing it now.’ That’s what we need in those clutch times at the end and that’s what we need moving forward to surprise some teams here down the stretch.” 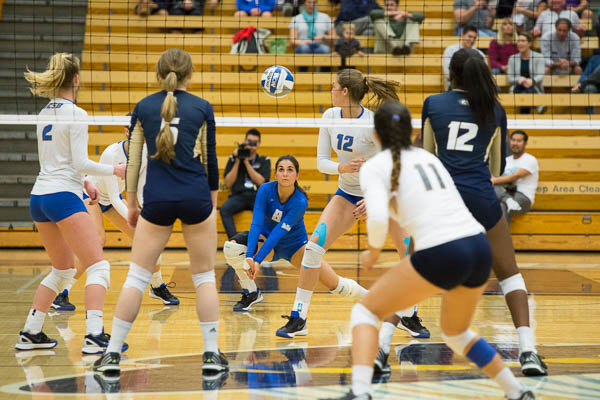 Despite team-highs in kills with 227 and an average of 2.77 kills per set, senior outside hitter Ali Barbeau did not start in the Gauchos’ two contests. The senior captain had a drop in her performance after 10 kills in last Thursday’s match versus Cal Poly. She finished the weekend with seven kills on 30 attempts, eight errors, and a -.087 hitting percentage.

UCSB’s losing woes continue as its slump extended to five matches. The Gauchos are now 6-17 overall and 2-10 in the Big West. Saturday’s victory brings UC Irvine within one win from achieving a .500 record. The Anteaters sit at 12-13, 6-7 in conference play.

Also just one win away from the neutral winning percentage mark is UC Davis. Arguably its most impressive win of the season, UC Davis is now 13-14 overall, 8-5 in Big West matches after a 3-2 upset over Cal Poly on Saturday and its win over UCSB on Friday.

“I definitely think the upperclassmen, me and the seniors, need to step it up,” junior middle blocker Phoebe Grunt said. “We need to tell the team ‘this is what we’re going to do and this is how we’re going to do it.’ It’s been a long season but we still have games to go. We can make a change at this point, there’s no reason we can’t step it up.”

From the match’s beginning, UC Irvine was able to establish its dominance on the offensive end. It opened the first set with a 6-1 lead, forcing a UCSB timeout. The Anteaters took an even more comfortable lead at 17-7, causing another Gauchos’ timeout.

While UCSB and UCI would go on to exchange points, the Anteaters’ .379 hitting percentage proved to be too much for the Gauchos’ defense.

Santa Barbara’s commanding start helped it gain a 12-9 lead but a 5-0 Anteaters’ run led to UC Irvine taking a 14-12 lead. However, the Gauchos responded with a 6-0 run of their own.

Sparking the Gauchos’ run was the outstanding serving of senior opposite Jaylen Villanueva. Her four consecutive service aces helped give UCSB its 18-14 lead. Villanueva finished with a team-high 11 kills and had 10 digs.

Adding to Villanueva’s match-high of four aces was Grunt and freshman outside hitter Devin Joos. Grunt led UCSB with a .389 hitting percentage and clocked four of her eight kills in the second set. In spite of her .156 hitting clip, Joos registered nine kills but was most valuable on defense with a match-high three solo blocks.

Santa Barbara sustained its lead but not free of pressure from Irvine’s attempt to take the 2-0 lead. Able to force the 23-23 tie, a service error by sophomore setter Emily Blair and an attack error by redshirt senior outside hitter Marisa Bubica allowed the Gauchos to seal the set for the 1-1 tie.

The attacking error was certainly a mistake that Bubica did not forget entering the third set. Although both teams hit poorly in the set, Bubica had nine of her match-high 19 kills in the third set.

Additionally, UCI’s defense played more efficiently in the second half. In spite of being outblocked, Irvine’s 72 digs was its second-most this season.

Twice did UCSB pull within a one-point deficit but could not capitalize on Irvine’s errors. Earning the Anteaters’ last two kills to take the 25-23 set victory and a 2-1 lead was redshirt sophomore opposite Lena Latour.

It was a similar scenario in the final set as well. Trailing 6-5, UCSB found some separation with a 5-0 run to take a 10-6 lead and force a UCI timeout.

Surprisingly after 18 kills the previous night against Cal Poly, freshman opposite Harlee Kekauoha was not in the Anteaters’ starting lineup and did not enter the match until being used as a substitution in the fourth period.

Irvine’s leader in kills with 307 and kills per set with a 3.34 average, Kekeauoha was perfect despite limited playing time. She finished with six kills on six attempts.

Irvine trimmed UCSB’s lead and as the match progressed, took a 17-16 lead. Back and forth scoring occurred between both teams, but it seemed like the Gauchos were on their way to victory with a 22-20 lead. But a service error by Villanueva trimmed UCSB’s lead to one and provided UCI with its comeback opportunity. Irvine closed the match with a 5-2 run to earn its 3-1 victory.

UCSB’s troubles on offense stemmed from its .154 hitting clip the night before versus UC Davis. While Santa Barbara contained UC Davis’ senior outside hitter Kaylin Squyres to five kills and a .103 hitting clip in the first meeting, the Gauchos were unsuccessful in their attempt of a repeat performance on Friday.

She finished with a match-high 13 kills, 14 digs, and a .379 attacking percentage. Junior outside hitter Kendall Walbrecht finished with 10 kills and a .310 hitting average.

UCSB will be on the road next Friday, Nov. 13th at Cal State Fullerton for a primetime matchup on ESPN3 at 4:30 p.m. The Gauchos’ weekend continues with a Saturday match at UC Riverside at 7:30 p.m. Santa Barbara’s two conference wins appeared in home matches against both teams earlier this season.