The Daily Nexus
Volleyball
UCSB Not Willing to Concede as Season Winds Down
November 3, 2015 at 9:43 pm by Sean White

The UCSB women’s volleyball team has not had a losing conference record since its 7-9 finish in 2008. With just six matches left this season, it would take a miracle for the Gauchos to win out the remainder of their schedule to achieve a neutral finish. At 6-15 overall and 2-8 in conference play, the odds of Santa Barbara ending with an 8-8 Big West record are highly unlikely.

“You aren’t necessarily pleased with the results, but you work on improving the program and improving everybody every day,” Head Coach Nicole Lantagne Welch explained. “It’s still the process that matters. We still can make a lot out of what’s left this season, and that’s how we need to approach it.” 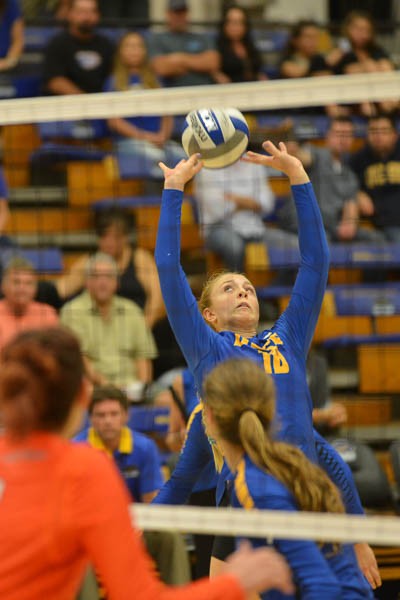 While jumping in the air, Annie Hasselmann sets the ball. Cameryn Brock/Daily Nexus

In hopes of bringing its three-match losing slump to an end, UCSB prepares for its pair of home contests versus UC Davis on Friday and UC Irvine on Saturday.

It will be the second meeting between the Gauchos and Aggies this season after Davis swept UCSB on Oct. 8. UC Davis enters the Thunderdome with an overall record of 11-14 and 6-5 in conference matches. Saturday will be the first time UCSB and UC Irvine face each other this season. The two teams split last year’s season series with Irvine winning the first match 3-2 and UCSB redeeming itself with a 3-1 victory.

Despite limiting star senior outside hitter Kaylin Squyres to five kills and a .103 hitting clip in its first meeting against the Aggies, UCSB was unable to contain Davis’ offense, which hit over .300 in the match’s first two sets. Since the start of conference play, Davis ranks second in the Big West with 540 kills, 514 assists and 648 digs.

Filling in for the absence of Squyres in that first meeting was junior outside hitter Kendall Walbrecht. She was the only player to achieve double digit kills with 17. Walbrecht ranks second on the team with a total of 234 kills and a 2.52 kills per set average.

Still, as the conference leader with 406 kills and a kills per set average of 4.37, containing Squyres is not a guaranteed outcome. Prior to the Aggies’ recent loss to Long Beach State this past Saturday, Squyres tied a 25-year-old school record with eight service aces in a five-set victory over Cal State Northridge on Thursday.

“We just need to know that a lot of balls are going to go to the outside,” Lantagne Welch said. “We’ve got to be really clean with our defense through six rotations, not just three. We have to do a better job consistently throughout a match of defending the left side.”

UCSB may have found a hidden gem of its own at the outside hitter position in freshman Devin Joos. In spite of the loss to Cal Poly, Joos made the most of her opportunity in receiving more playing time in the front row. It is expected that after career-highs of 12 kills and a .258 hitting percentage that she will be a frequent asset in the Gauchos’ offensive attack.

“She’s been a regular in our starting group for a little while now,” Lantagne Welch said. “She had an emerging game, and we just need her to keep being productive and keep contributing to the team.”

Topping off the Gauchos‘ weekend is their match versus UC Irvine. It is not too common that a team faces a conference opponent for the first time this late in the season, but UCSB is optimistic about its chances.

“We have tape on them as they [UC Irvine] do on us,” Lantagne Welch explained. “It’s kind of exciting to have that new, refreshing team to get to go after and see how you match up with. They have some dynamic players, and it’ll be a good battle. There’s some things that we’re working on to take to the Anteaters.”

Regardless of what Santa Barbara’s strategy is heading into game day, certainly it will include a plan to try to prevent freshman opposite Harlee Kekauoha from dominating. She leads the Anteaters with 283 kills, a 3.29 kills per set average, 28 service aces and 168 digs. Kekauoha has recorded an ace in the Anteaters’ last five matches.

The versatile freshman recently earned her second Big West Freshman of the Week award this past Monday. In the Anteaters’ last two contests, Kekauoha tallied a total of 35 kills and a .460 attacking percentage. Within this impressive feat was a career-high 20-kill performance in Irvine’s sweep of CSUN this past Saturday. In 17 of the team’s 23 matches, Kekauoha has registered double digit kills.

Assisting the play of Kekauoha is redshirt junior Victoria Dennis, in her breakout year. Entering the 2015 season, Dennis had a career total of 133 kills, which includes redshirting her sophomore year. She has had no issue with embracing a bigger role, however, ranking second on the team in kills with 241 and kills per set at 3.01.

The pattern of the breakout year continues with UCSB junior middle blocker Phoebe Grunt. In four of the team’s last six matches she has earned double digit kills. Grunt ranks fourth overall in the Big West in hitting percentage with a .344 average and has made a significant improvement since the start of conference play with the second-best hitting clip at .402 percent. Grunt is currently third on the Gauchos’ roster in kills with 139 and second in total blocks with 74.

“She’s putting up big numbers, so teams are putting more attention on her to slow her down,” Lantagne Welch said. “We need more balance on our team and other people to put the ball away. She’s been very consistent for us. We just need her to stay aggressive and stay after it.”

This weekend’s contests are two of UCSB’s last three home matches of the season. Santa Barbara’s rematch versus UC Davis on Friday, Nov. 6 will begin at 7:00 p.m. Its matchup versus UC Irvine follows on Saturday, Nov. 7 at 7:00 p.m. Both matches will take place in the Thunderdome.