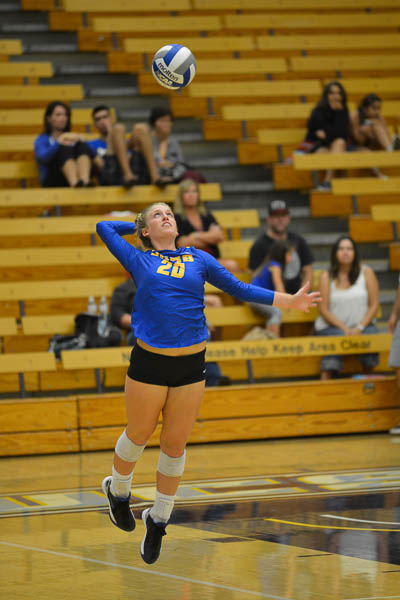 While closing sets continues to be a reoccurring issue for Santa Barbara, last night’s win was the first time Cal Poly beat the Gauchos in the Thunderdome since Nov. 6th, 2010. Yet, it was a superb night for freshman outside hitter Devin Joos, who recorded career-highs with 12 kills and a .258 hitting average.

“I’ve always played back row so I was really excited to get that opportunity,” Joos said. “I think coach trusted me and as a player you feel more powerful when your coach stands behind you.”

Enduring its third consecutive loss, UCSB is now 6-15 overall, 2-8 in conference play. The defeat places Santa Barbara in eighth-place of the Big West standings, its lowest ranking since finishing in seventh in 2007.

Winners in eight of its last nine matches, Cal Poly boast a 16-5, 8-2 conference record. Its 16-5 overall record is its best start through 21 matches since 2006. Moreover, the Mustangs’ current Big West record is their best since 2008 and ties them for second-place in the standings with Long Beach State.

For the second time this season, three different Gauchos amassed double digit kills. Despite outhitting Cal Poly in the match’s first two sets, UCSB found itself having to play from behind, losing the first set.

It was an assertive start by UCSB in the match’s opening as its energetic play generated a 4-0 lead over the Mustangs. But the Gauchos could not maintain their momentum as the occurrence of 10 UCSB errors helped fuel Cal Poly’s comeback to tie the score at 15-15.

The Mustangs were able to benefit from the Gauchos’ mistakes, going on a 6-2 scoring rally to 21-18 lead to force a UCSB timeout. In spite of pulling within two at 22-24 with a block by junior middle blocker Elizabeth Sheffield and Joos, a kill by sophomore Savannah Niemen captured the 1-0, 25- Cal Poly lead.

The following set would go on to unfold in the same manner of a close battle between the two teams. Santa Barbara achieved another strong start, opening the set with a 6-3 lead but allowed a 4-0 Cal Poly run that gave the Mustangs a 7-6 lead. As both teams traded point, UCSB eventually took a late 21-19 lead. Determining the result of the second set was a trade-off of scoring runs. A 3-0 run helped Cal Poly go up 23-22, but the Gauchos responded with a 3-0 scoring rally of their own. Back-to-back kills by senior opposite Britton Taylor capped UCSB’s 25-23 win and knotted the score at 1-1.

Helping lead UCSB to its tying set victory were senior outside hitter Ali Barbeau and senior opposite Jaylen Vllanueva. Although she stuggled with a match-high eight errors and a .061 attacking percentage, Barbeau registered 10 kills while Villanueva notched her third double-double of the season with 12 kills and 11 digs. The Gauchos also tied their season-high of 81 digs, led by 21 scoops from freshman Emilia Petrachi. They even outblocked the Mustangs 21 to 13 but that was not enough to prevent Cal Poly from securing the victory in the last two sets.

While UCSB’s defense achieved its goal of restraining Cal Poly’s freshman outside hitter Adlee Van Winden, holding her to just six kills on 51 attempts, it did not find a way to stop sophomore outside hitter Raeann Greisen.

“They [Cal Poly] definitely played stronger towards the end of the match and that’s something that we need to fix, we were pretty flat in that last set,” Head Coach Nicole Lantagne Welch explained. “We gave up too many balls to Greisen in the seam. We needed to do a better job with our block on her.”

Greisen continued her dominance against the Gauchos as she concluded Thursday with a match-high 14 kills. In addition to her performance, Niemen ended with 12 kills and a hitting clip of .450 while junior middle blocker Taylor Gruenewald finished with 10 kills and a .348 hitting percentage.

Offensively it was a tough night for both programs, but Cal Poly emerged with a match-high .294 attacking percentage in the third set. UCSB came within one, trailing 15-16 but could not maintain its hold on the Mustangs as they went on a 9-3 run to secure the set victory, extending their lead to 2-1.

Cal Poly’s momentum carried into the fourth set. It captured the lead and allowed just one early tie. The production of Greisen, Niemen, and Gruenewald happened to outperform the Gauchos’ play when it mattered most as they helped the Mustangs earn the 3-1 victory.

Although UCSB ended up with its fifteenth loss of the season, the Gauchos’ Joos felt indifferent about it being a negative for the team.

“Mentally we won, even when we were down I felt like we were up. It’s just frustrating,” she said. “When I was out there, I could see that Cal Poly was scared. We just need to figure ourselves out and establish ourselves as a team better and have a little more pride.”

UCSB gets a few days of rest without have any matches this weekend. It will resume play next Friday, Nov. 6th versus UC Davis at 7:00 p.m. The Gauchos will end their home stretch of three matches by facing UC Irvine on Saturday, Nov. 7th at 7:00 p.m.