The Daily Nexus
On the Menu
Resurrected Recipes: Five Gross Recipes Risen From the Dead to Haunt Your Kitchen
October 29, 2015 at 5:00 am by Collin McLeod 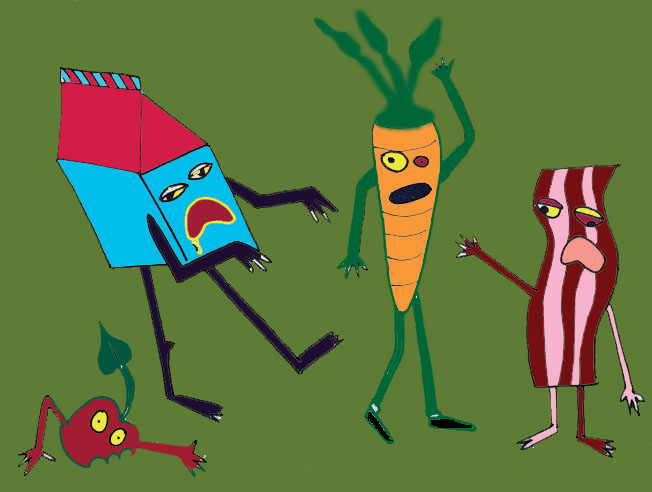 Halloweeners, brace yourselves. While you are gearing up for your night of sugary (and maybe alcoholic) feasting, there is evil afoot. No, I am not talking about spirits nor am I talking about the offensive Caitlyn Jenner costume that your least favorite bro will inevitably wear this year. I am talking about the rise of the dead. It is said that the dead walk freely among the living every Halloween, starving for human flesh. To prepare you for the possible upcoming paranormal visit, here are some resurrected recipes — which really should just have stayed dead — from the great beyond that will ward off the bloodthirsty heathens of Halloween. In other words, here is how to ensure Halloween in I.V. will be kept local this year.
Russian Congealed Salad
Once thought to be the pies de resistance of every 1950s dinner party, congealed Jell-O salads humbly passed on as one of the worst ideas ever. Not even the pretty design can help this odorous monster. One bite of this slimy, limey, cheesy monstrosity and it would be no surprise that Halloween haunts would want to stay far away from you.
Liver Sausage Pineapple
No, this is not a joke. People had to have traveled to the deepest depths of hell to find this one. Who am I kidding? Lucifer probably handwrote the entire 1953 Better Homes and Gardens New Cookbook himself. Pineapple-shaped processed pig liver studded with green olives, set in gelatin and iced in mayo. It just screams health, right? A few bites will probably turn you into one of the walking dead, but that should definitely be enough of a sacrificial act to get your newfound dead friends to leave you alone.
Peanut Butter and Mayonnaise Sandwiches
This cuisine atrocity is brought to you by the darkest days of the Great Depression. People could not afford real meals, so they went with what they had available. What they squished together was a salty mess of peanut and egg paste that can only be described as an affront to the senses. Having a platter of these abominations for your dead company would be perfect for locking their jaws tightly shut.
Bleu Cheese Mousse
Speaking of abominations. This tangy atrocity was featured in a 1973 issue of Bon Appétit magazine where it rightfully rests in peace. Do not get me wrong, I love blue cheese, but the idea of a cold, creamy, pungent paste made from sour cream, cottage cheese and blue cheese set in gelatin makes me queasy. Images of cold dog vomit come to mind. I would not even serve this as a way to keep away the dead. It is just too cruel.
Cranberry-Mayo Salad
Need to conduct a séance for spiritual protection from the dead? Feeling hungry in the process? Well forget Pinterest for inspiration. Light up some of these cranberry citrus bologna barbarities and you have got yourself a satisfying séance. Because screw human decency. I want to eat a meat-scented mayo candle. Has anyone contacted Bath & Body Works about this yet?