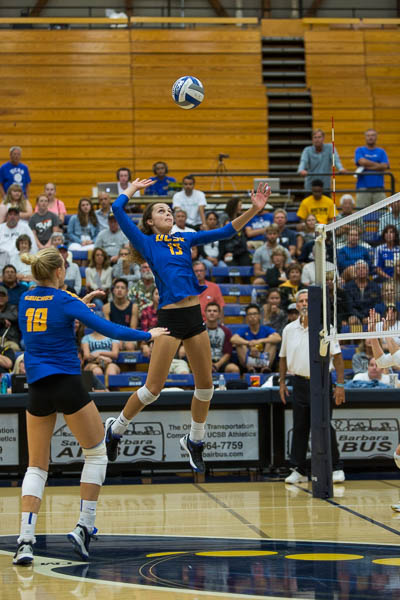 The historical background of the Blue-Green rivalry between UCSB and Cal Poly requires no explanation when analyzing the intense competition both of these teams present when facing each other. Thursday’s matchup will be the second meeting between the UCSB women’s volleyball team and the Mustangs this season. Cal Poly’s 3-1 victory over the Gauchos on Oct. 10 was its first win over UCSB in four years. Santa Barbara attempts to even the season series up, hosting the Mustangs in the Thunderdome. Cal Poly has not won a match in the Thunderdome since Nov. 6, 2010.

Owning a 6-14 overall and 2-7 conference record, UCSB looks to upset a Cal Poly team that has won seven of its past eight matches. Prior to its five-set loss to Long Beach State this past Saturday, the Mustangs had won seven straight. They currently hold a 15-5, 7-2 Big West record and are tied with LBSU for second place in the conference standings.

Currently on a two-match losing streak after wins the week before, it seems like a possible change in the Gauchos’ starting lineup or rotation would be a possible solution to their setback. However, with just four seniors and a variety of players that have seen little to no time, the Gauchos do not have many alternatives to put on the court.

Thursday being UCSB’s only match of the week, the Gauchos should be properly prepared for the Mustangs. They must find a way to prevent Cal Poly’s dominant duo of freshman Adlee Van Winden and Raeann Greisen. The two outside hitters have nicely complimented each other this season and are the team’s top two leaders in kills and kills per set average, owning a combined total of 249 kills and an 8.04 average. They shined in Cal Poly’s bout against UCSB earlier this year as Van Winden recorded 20 kills and Greisen added 17. Coming off her sixth Big West Freshman of the Week award after a weekend in which she recorded 38 kills and 21 digs, containing Van Winden along with Greisen will be a strenuous task.

“They [Cal Poly] are going to set their outsides a bunch of times, they’re very good attackers from the pen,” Lantagne Welch said. “We actually did a pretty good job on Van Winden, even though she had a lot of kills. We feel like we didn’t give her a lot of ‘freebies,’ she had to really work for them. We have to be able to contain and score on our end.”

UCSB managed to contain the Mustangs in their first bout. Santa Barbara outhit and outblocked Cal Poly, averaging a hitting clip of .239 and 18 blocks to the Mustangs’ .231 attacking average and 12 blocks.

Still, the Gauchos’ inconsistencies to finish when playing in narrow sets has pestered the team for the majority of the season and was the deciding factor in Cal Poly winning the final two sets in their win over UCSB earlier this season.

Santa Barbara played from behind in that matchup, causing a 1-1 tie in the second set of that match. But UCSB knows it must find a way to finish in hopes of avoiding another late-game letdown.

“For us, it’s playing really good in the critical points,” Lantagne Welch said. “That was a determining factor in our match at Cal Poly and also affected us this past weekend. We need to get over that hump and have people that really want to be in a pressure moment come forward and play their best. We need more people to rise to that challenge and are excited about that challenge.”

Thursday’s match between UCSB and Cal Poly will begin at 7:00 p.m. in the Thunderdome.