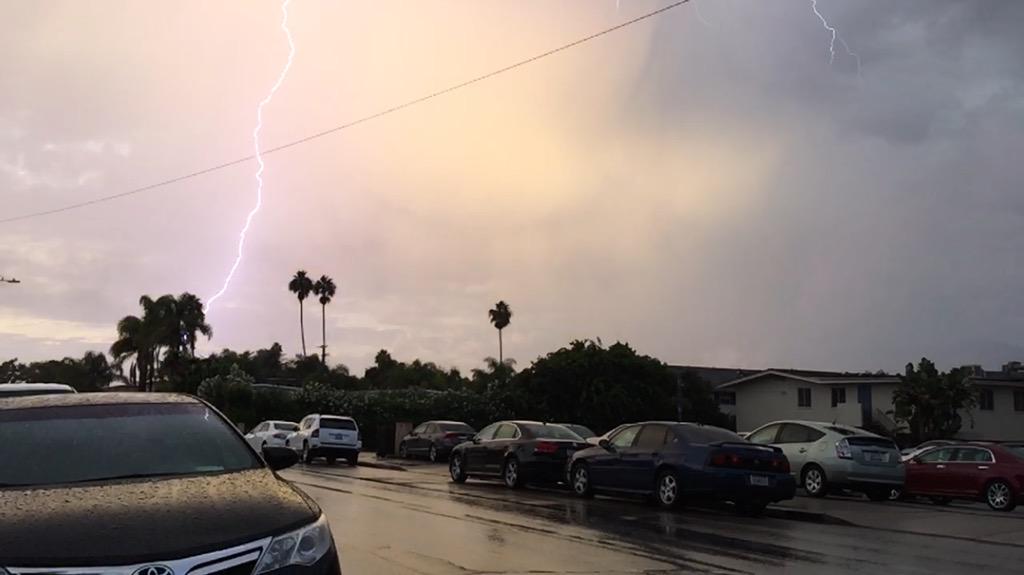 Californians received a huge relief this past Wednesday when a heavy rainstorm flooded the state with an average of 1.5 inches of precipitation. Governor Jerry Brown called a press conference to officially announce the end of the drought, in which he also stated that October 14 should now forever be known as “National Wet Day.” Young people flooded the streets to celebrate the end of the Golden State’s suffering. Some recalled the hardship they have faced due to the crisis.

“Business has been really hard,” George McGrass of Isla Vista said. “For a long time I couldn’t afford to water my crop; but tonight the bongs of DP shall be overflowing.” Many of his fellow residents shared the same sentiment. “Last week I had to pay $30 for a dime bag. 30!” Mary Zheng said. “I don’t think I would have been able to support my habit much longer — I would probably have to quit paying for laundry or something.”

Many upperclassmen also noted a change in behavior of their freshman counterparts once the rain hit. “Before, they would constantly be looking for an easy hookup.” Leila Oswald said. “But now, they’re actually respectable. The rain must have quenched their thirst.” Skip Peterson, a first-year music studies major, agreed. “I haven’t given my Kik out to any girls in the past three days. It’s been really weird.”

Chancellor Yang was not excluded from the festivities, as he gave UCSB students permission to down-flush their toilets and announced the campus lawns would no longer be hydrated with recycled water. However, not all California residents were thrilled by the recent storm. Some are now questioning if the El Niño will bring terror instead of tribulation to their scenic coastal town. “Didn’t you hear about the sea snakes? We’re all going to die!” Malcolm Suerte screamed as he ran from Manzanita Beach. “If this weather doesn’t stop, we’re going to have to take the school and move it somewhere else. The ocean will swallow us whole.” Noah Clark, a T.A. in the Earth Science Department, concluded upon analyzing no research whatsoever. Some students took to protesting the storm in the Arbor on Thursday afternoon, hoping to attract the attention of students studying for their midterms in the Davidson Library. “One and a half inches might not seem like a lot, but if it happens again that would be like three whole inches, and that’s almost a lot of rain” Kim Lowry, founder of the Umbrella Work Union and organizer of the protest, said.

A recent poll by The Daily Nexus reveals that students are divided on whether the recent storm’s benefits outweigh its harm. They have some time to decide, though, because no rain is forecasted for at least the next ten days.

I have no idea where this writer is getting her facts, but this article needs a fact check and the author needs a reality check. I live in SB; the drought continues and there’s no real end in sight. This article is packed with so much gibberish it is a disservice to the Nexus, UCSB and the general community to a degree that boggles the mind. I can only hope that Ms. Williams is not a journalism major; if she is, she will have better luck at the National Enquirer or Star tabloids where such shoddy journalism and worthless blather… Read more »

You can't be serious
Reply to  Reality Check

You do realize that Nexustentialism is a satire section, right?

Wow
Reply to  You can't be serious

I don’t think Reality Check knows what satire is.

Jay Freeman (saurik)
Reply to  You can't be serious

FWIW, while I could tell it was sarcasm as I entered the second paragraph, there is absolutely nothing on this web page other than your comment to indicate that this is from a column called “Nexustentialism”.

Mr. Freeman is quite correct. I came to the story off a Google Alert.

Questionable humor for those towns east of UCSB have no water.

UCSB doesn’t even have a journalism major, maybe YOU should check your facts.

Pathetic, and not even funny. Give this student journalist an F.

You guys do realize this is a satire right?….Like….you…aren’t…supposed….to…take…it…..seriously…..?

I thought it was quite funny!

Are you guys kidding me? How could you have taken your time to actually develop this inscrutable writing? Who is in charge of publishing at the Daily Nexus ???

God you people are fucking stupid. Reading is hard. Go back to watching goats scream on Youtube.

This was great, ignore the people who don’t get it. National Wet Day, marking it on my calendar. Peace :)

Seriously, I’m really disappointed in some of these comments. It’s not difficult to realize that this is satire – with or without knowledge of the column. Even in the first paragraph, with the mention of “National Wet Day,” it was clear that this is not a serious article. George “McGrass” is clearly a play on the slang term “grass” being used to refer to marijuana. “Noah Clark” is referring to Noah’s Ark. This is actually a really impressive subtlty alluding to the horrible rainstorm in the bible. Please take the time to think before slandering hardworking, pithy writers.

Do some of these commenters also think The Onion is hard news and Jon Stewart/John Oliver are real news anchors? The article is funny and smart, but unfortunately many people on here seem to be lacking sophisticated humor. Regardless, great job to the writer for a clever and well-written article.