The remedy to almost any problem within sports is winning. For the players and coaching staff of the UCSB women’s volleyball team, losing 11 consecutive matches was a foreign circumstance that the Gauchos would no longer allow to define their season. 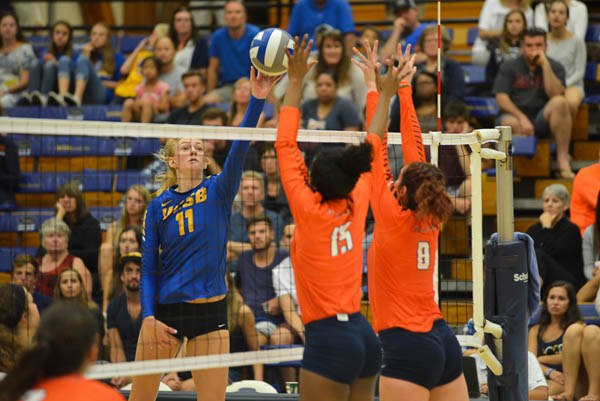 “It feels like things are back to normal,” junior middle blocker Phoebe Grunt said. “We’ve never had this before, I’ve never experienced this on any team I’ve ever been on, and none of us have. Past games have kind of been like, ‘what is going on, why can’t we do this?’ But tonight was a reminder that not all hope is loss, we’re going to figure this out. It’s still early in conference and we have to keep reminding ourselves that.”

Santa Barbara’s 3-1 victories over UC Riverside and Cal State Fullerton this weekend reflected the winning team that we all witnessed in the beginning of the season. Along with ending their winless streak, UCSB earned its first conference and home victory of the season. For the first time since participating in the Yale Invitational on Sept. 4th-5th, the Gauchos have won back-to-back matches and are now on a two-match winning streak. Santa Barbara’s latest wins improves its overall record to 6-12 and 2-5 in the Big West.

“This weekend is big for our team and momentum moving forward,” Head Coach Nicole Lantagne Welch stated. “We we’re flat to start both matches, but I love the way we came back in the last three sets. “The realization is that we can beat anybody in this conference when we really work for it and execute.”

The defeat hands Cal State Fullerton its 18th loss of the season, and extends the Titans’ losing streak to 21 matches in continuation of last year’s winning slump. Fullerton remains winless at 0-18 and its 0-6 conference record makes the Titans the only Big West team without a conference win. UC Riverside is now 6-14, 1-6 in conference after losing to UCSB on Friday and Cal Poly on Saturday. The Highlanders’ pair of losses extends their losing streak to six matches.

Having momentum from the previous night’s victory and facing a winless team, it was assumed that Saturday’s match versus Cal State Fullerton would be a lopsided win for UCSB. But the Titans came into the Thunderdome and stunned the Gauchos by taking a 25-20 win in the opening set. It was Fullerton’s first set-victory after being swept in its last three matches.

Both teams traded points throughout the initial set, not allowing each other to gain a lead bigger than a margin of one. It wasn’t until the two teams were knotted at 18 that Cal State Fullerton managed to break away. A kill by senior setter Mackenzie Olsen set the tone for the Titans’ 7-2 run. Closing out Fullerton’s victory was freshman outside hitter Kyra Smith, who led the team with 11 kills.

For the first time this season, UCSB had a total of three players with double digit kills in one match. Leading the Gauchos’ stellar offensive attack was senior opposite Jaylen Villanueva. She recorded a match-high 15 kills to go along with a .306 hitting clip and 10 digs.

UCSB’s attack was at its best in the second set. The Gauchos hit for a match-high .433 hitting percentage and went on an 8-1 run to secure a 25-12 victory that tied the match at 1-1. Backing Villanueva’s performance was the tremendous play of senior opposite Britton Taylor and Grunt. The two Gauchos registered 13 kills and helped UCSB obtain its .302 hitting average for the night.

Similar to the match’s opening, it was a battle for the lead in a pivotal third set. But the Gauchos’ rhythm on offense continued as they went on an 8-2 run to snag the 2-1 lead, winning by a score of 25-19.

Cal State Fullerton had no chance against UCSB in the final set. Villanueva tallied five straight kills to open the fourth set which paved the way for the Gauchos’ 25-10 rout of the Titans and their 3-1 match victory.

“After last night, it gave us a confidence booster,” Taylor said. “Tonight we came in with the same mindset and belief in each other which really helped us pull through and get the win.”

Providing Santa Barbra with that confidence boost was Friday’s win over UC Riverside. Despite trailing after losing the first set 15-25, the Gauchos persevered to win the match’s final three sets in scores of 25-20, 25-19, and 25-18.

Besides UCSB’s equalizing victory in the second set in which it earned a .275 hitting clip, it was a poor hitting match for both teams. Santa Barbara clocked a .152 hitting percentage, while Riverside finished with a .065 attacking average. Despite UCR’s struggles offensively, senior outside hitter Helena Peric ended the evening with a match-high 14 kills.

Helping guide UCSB to victory was Grunt, who had a team-high 13 kills and a match-high .500 hitting clip. She certainly put her bid in as a Big West Player of the Week nominee after a weekend in which she finished with a total of 26 kills, nine blocks, and a .489 hitting average.

“The great thing about Phoebe was she was on from the first moment,” Lantagne Welch said. “Whereas our team was really flat in set one, she came to play with energy and fire. She was going to find a way to put the ball to the floor.”

While No. 8 Hawai’i and Long Beach State are destined to finish within the top two spots of the Big West, UCSB’s opportunity to prove itself as deserving of the conference’s pick to finish third is still possible with nine matches left.

Next for Santa Barbara are road matches against Long Beach State and Cal State Northridge.