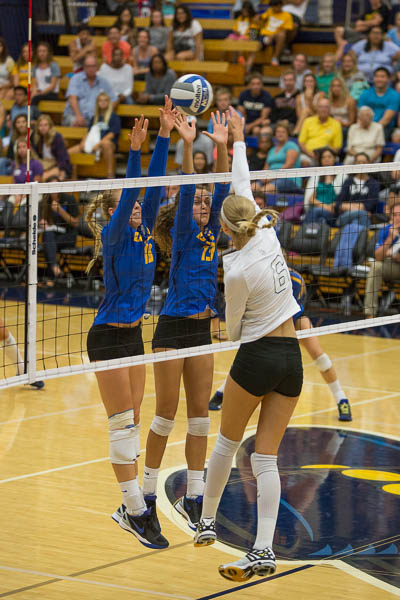 It’s a shorter recovery period for the UCSB women’s volleyball team after hosting Long Beach State on Sunday. The Gauchos head up North to take on UC Davis tonight and will continue their excursion on the road to face rival Cal Poly on Saturday.

“It is a short week, however, we still had our normal day off,” Head Coach Nicole Lantagne Welch said. “We’re going to have a couple weeks where we play on Thursday, so I think it’s just something that is a part of Division I athletics. You just have to deal with it and make the best of it.”

The Aggies welcome UCSB with a 7-11 record, and despite going 0-2 in its conference opening weekend, UC Davis is now 2-2 in Big West play after consecutive 3-1 victories over UC Riverside and UC Irvine this past week.
Davis certainly has the upper hand heading into tonight’s matchup as the Aggies defeated UCSB in both of last season’s meetings, sweeping the Gauchos in the first contest and stealing a five-set victory the second time around.

Simply having her way against Santa Barbara last year was outside hitter Kaylin Squyres. Now a senior, Squyres tallied a total of 38 kills and 20 digs in the two matches played, in which 24 of her kills occurred in the team’s second victory. After leading the Big West in kills (441) and kills per set (4.12) last season, there’s no indication that Squyress’ dominance on the court will be ending any time soon as she is on pace to be crowned the statistical leader in both categories for consecutive seasons.

Squyress currently leads the Big West in kills (317), kills per set (4.73), and ranks third in total digs (241). She was named the Big West Player of the Week after back-to-back 20-plus kill performances (24 vs. UCR, 25 vs. UCI) in Davis’ last two conference meetings. Notably, Squyres became just the ninth player in Aggie history to surpass 1,000 career kills as she now has 1,023.

“They’ve got a go-to player in Squyres,” Lantagne Welch said. “You’re certainly not going to shut her down, but we have to at least slow her down. The best way to counterattack a good hitter is to put the ball away when you have your opportunity.”

While Squyres has been the focal point of the Aggies’ success, the entire Davis team has played incredibly well. It leads the Big West in total kills (882), assists (833), service aces (93) and digs (1,022). Also, along with Squyres’ conference honor, freshman libero Malia Bolko received her first career Big West Defensive Player of the Week award after amassing a total of 42 kills and an average of 5.25 digs per set in Davis’ Thursday and Saturday wins.

Despite its shortcomings against UC Davis, the results of last season’s classic “Blue/Green” rivalry matches were to the advantage of the Gauchos. UCSB opened its 2014 conference schedule against the Mustangs, winning a rigorous five-set match and finished its season in San Luis Obispo with a 3-1 victory over Cal Poly. Santa Barbara’s last loss to Cal Poly was on Oct. 12, 2011.

However, the 9-17, 4-12 team that existed last season has renovated its program and is currently peaking, making a statement as the Big West season unfolds. It has nearly been 10 years since the Mustangs last ended a season as conference champions. They conquered the Big West in the years 2006 and 2007, earning back-to-back conference champion honors.

Fresh off a weekend in which it upset Long Beach State and swept Cal State Northridge, the Cal Poly Mustangs arguably are the Big West’s most improved team this season, harboring a 10-4, 2-1 conference record.
Leading the Mustangs’ winning crusade is freshman outside hitter Adlee Van Winden. A definite candidate for the Big West Freshman of the Year award, Van Winden steered the Mustangs to their upset over Long Beach State which knocked the 49ers out of the AVCA Top 25 rankings. She produced a career-high 21 kills, helping Cal Poly end LBSU’s 23-match conference streak. Following Friday’s triumph, she registered 12 kills in the Mustangs sweep of CSUN.

Van Winden’s phenomenal performance earned the first-year player her fourth Big West Freshman of the Week honor. While class standing places her within the Class of 2019, her performance on the court makes her seem like a veteran. Van Winden ranks fourth in the Big West in kills (205) and third in kills per set (3.94). It is evident that she has put much time into her attacking technique as she has notched double-digit kills in 13 of the team’s 14 matches this season.

UCSB’s winless streak has yet to come to an end, but the Gauchos have made progressive strides over the course of their three conference games. Santa Barbara won the first set in both of its last two matches, but must learn how to maintain its lead throughout the game’s duration.

“Our energy level is huge for that,” Coach Lantagne Welch said. “The previous week we had talked about starting slow so we made the change and got good starts. Now we just need to maintain it and restart at each set of every match.”

Tonight’s match between UCSB and UC Davis will begin at 7:00 p.m. at The Pavilion and will have a day off before facing Cal Poly on Saturday at 7:00 p.m. at the Robert A. Mott’s Athletic Center.