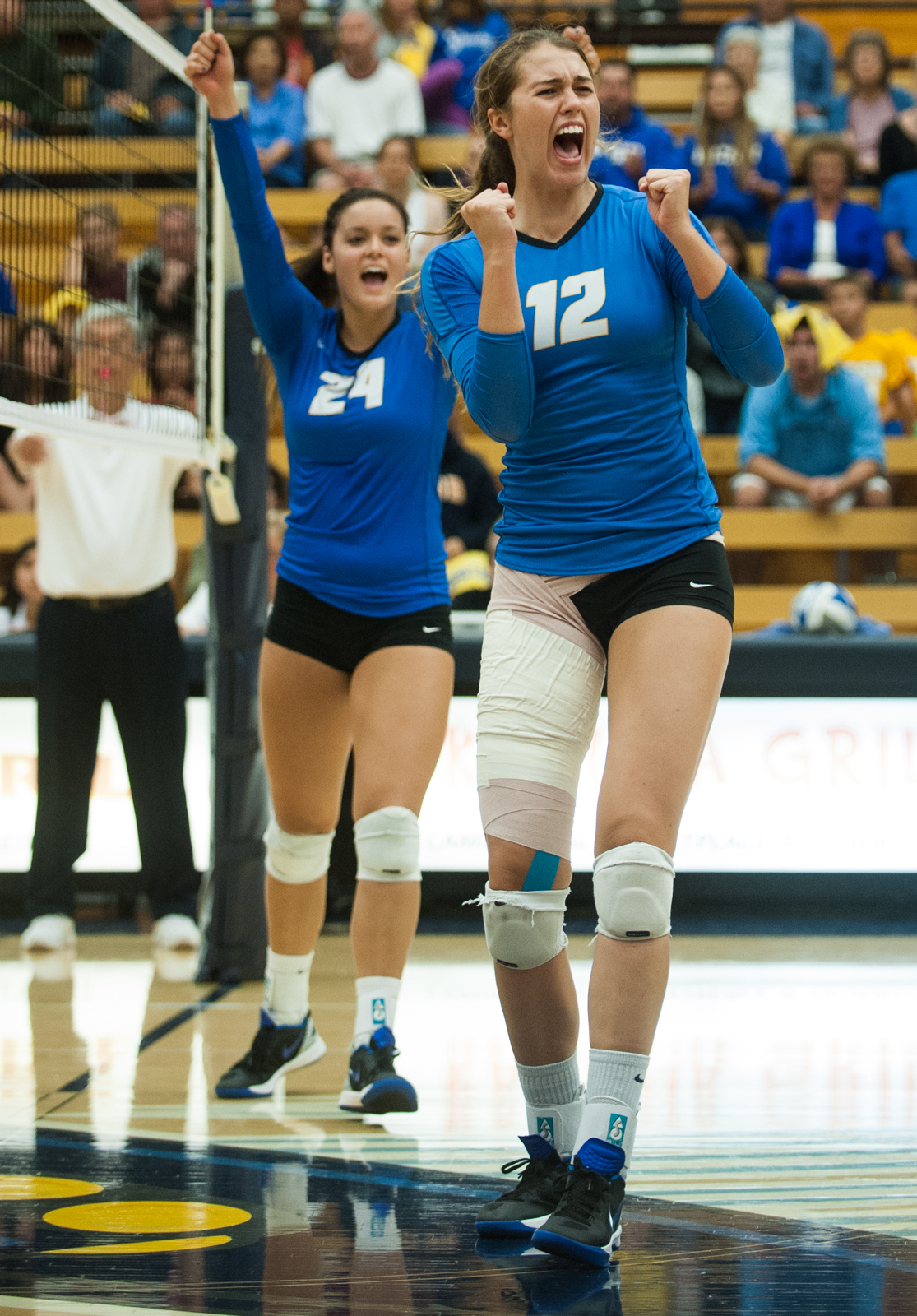 Junior middle blocker Phoebe Grunt recorded five blocks vs. SDSU, while sophomore outside hitter Chanel Hoffman led the Gauchos’ with 10 kills in both of their weekend contests.
Kenneth Song/Daily Nexus

Unable to win any of its matches during its five-game home stretch, it’s a wonder as to how a battered UCSB women’s volleyball team will respond in its upcoming conference opener. The Gauchos are now 4-7 overall, and are hoping that the start to Big West play will be an uplifting phase of their season.

It was a thrilling opening to the Gauchos’ weekend as they battled with Loyola Marymount in a five-set showdown. Able to secure the match’s last two sets, the Lions would go on to earn the 3-2 victory.

The offensive firepower of both teams was on full display as each traded points in the game’s first set. Tied at 22-22, it was UCSB’s attack that allowed it to win the set as the Gauchos’ recorded three-consecutive kills. Aiding Santa Barbara in its closing of the set was its efficient pursuit as it had just one attacking error.

While the Gauchos’ managed to surpass LMU in the first set, the Lions’ achieved their best hitting clip of the night, a game-high of .464 in the second set. After nearly capturing the victory in the first set, Loyola Marymount did not allow the loss to linger as it opened the new set with a 7-1 run. Helping create these high-percentage attacks for LMU was the marvelous setting performance of senior Hannah Tedrow as she registered a total of 53 assists.

As for UCSB, its number of errors equaled its total of kills, resulting in a .000 hitting percentage. However, Santa Barbara redeemed itself by earning its best hitting-clip of the night at .364 and never allowed LMU to gain the lead during the entire third period.

Santa Barbara’s ability to gain an early lead was vital as it eventually led to the Gauchos’ largest lead of the set at a score of 19-10. The Lions’ trimmed UCSB’s lead to as low as two at a score of 22-24, but were unable to fully overcome the deficit.

Down two sets to one, it was only a matter of time until LMU’s lethal trio of hitters would emerge. Led by an arsenal of players who each have more than 120 kills, the Lions’ offensive attack overwhelmed the Gauchos in the game’s last two sets.

Senior middle blocker Rachelle Suaava, outside hitters junior Jamie Lea and sophomore Sarah Sponcil combined for a total of 46 of the team’s 67 kills. Sponcil had a sensational performance as she recorded 23 kills, 10 digs, and five service aces.

UCSB responded with some offense of its own as sophomore outside hitter Chanel Hoffman led Santa Barbara in kills with 10. Balancing Santa Barbara’s attack was its exceptional play at the net. The Gauchos’ defense ended the evening with a total of 21 blocks, junior middle blocker Elizabeth Sheffield was responsible for a match-high eight. Still, the Gauchos’ efforts were not enough as their winless streak continued and the Lions’ improved to 7-3 overall.

In spite of the team’s latest winning drought, its remains with the utmost confidence. “We try to think of every game as a fresh new start,” Hoffman said. “It doesn’t matter if we lost or even won the last game, all that matters is that there is a new game ahead, and a new opportunity to bring everything we have to the court.”

Concluding the Gauchos’ non-conference schedule was their Saturday bout versus San Diego State. Despite being swept 3-0, UCSB did not oblige to the Aztecs’ victory as it did not go down without another hard-fought performance in the match’s final two extra-point sets.

Trailing 14-22 in the second set, Santa Barbara’s 10-2 rally helped tie the score at 24-24. A total of six lead changes would occur from that point on, but a costly UCSB service error and a timely block by SDSU’s defense resulted in the Aztecs’ 31-29 set victory.

On the verge of being swept, UCSB retaliated with a commanding start of its own. It opened the third set with a 10-3 run, and seemed destined to play another set. Guiding the Gauchos’ potential comeback was Hoffman, who had a team-high 10 kills while sophomore libero Sydney Bast recorded a career-high 18 digs.

But, the Gauchos’ hot streak didn’t last long as San Diego State would go on a 10-2 run of its own to take a 18-16 lead. Leading the three-time Mountain West champions was freshman outside hitter Alexandra Psoma as she finished with a match-high 12 kills. Both teams continued to swap points, but it was another Aztecs’ block by middle blockers senior Kaja Sandberg and junior Emma Fuzie that sealed the team’s 29-27 win, allowing SDSU to improve to an overall record of 3-8.

Certainly the past two weekends have been frustrating for UCSB, but the Gauchos’ plan on leaving the adversity of their non-conference games in the past as they prepare for their first conference game of the season.

“The big thing in our favor right now is we actually start a new season today,” Head Coach Nicole Welch said. “We’re moving into Big West play, and everyone is 0-0. I think that can be extremely motivating for us, everyone has a clean slate and we’re starting fresh. We can just build from that.”