Despite ending its trip to the East Coast with a loss, it was another progressive weekend for the UCSB women’s volleyball team. The Gauchos improve to 4-2 overall after another consistent start to open the Yale Invitational. 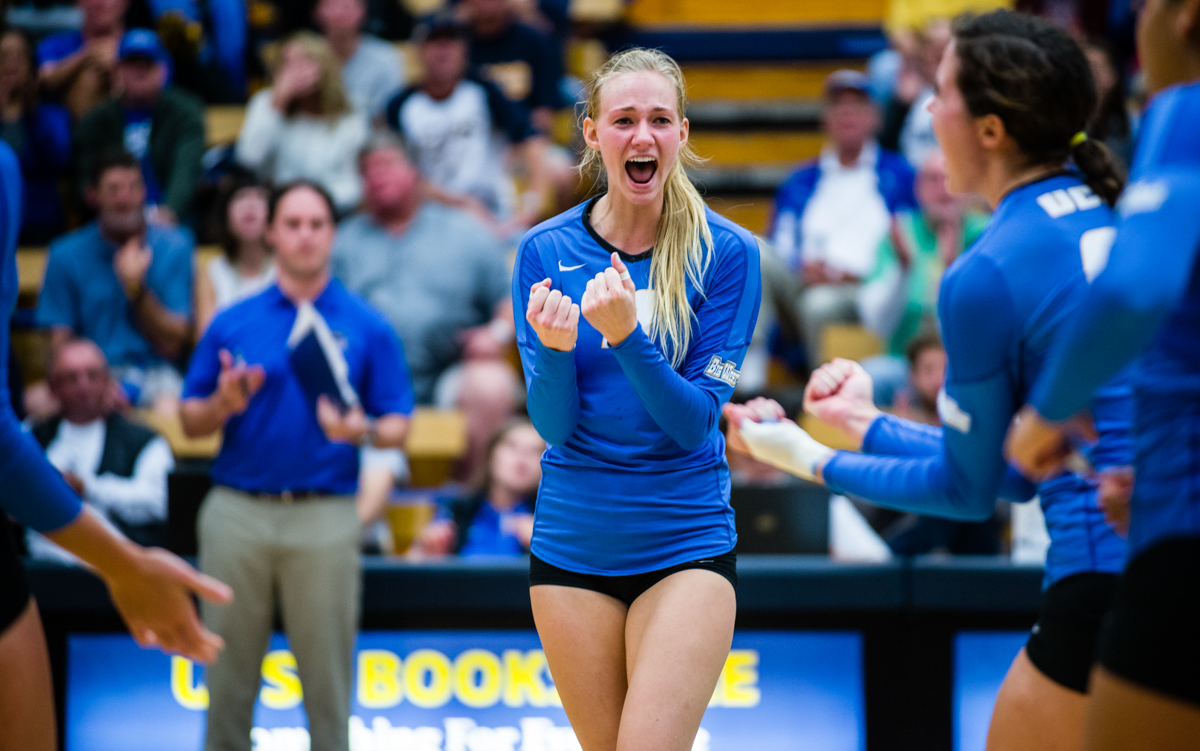 Santa Barbara began tournament play with a Friday matchup against the Rice Owls. After getting off to a sluggish start, UCSB played with a vengeance as it won three straight sets to earn the 3-1 victory: 24-26, 25-15, 25-19, and 28-26.

The intensity of Friday’s match was at its peak as both teams traded points in the game’s early stages. It wasn’t until the Gauchos’ broke a 12-12 tie with the Owls that they were able to establish a comfortable lead. A 4-0 UCSB run allowed the Gauchos’ to take a 16-12 lead, which led to a Rice timeout.

Stepping up early for the Gauchos with her aggressive attack was senior opposite Jaylen Villanueva as she ended the evening with a total of 12 kills and 14 digs.

Determined to neutralize the shift in momentum, the Owls comeback was ignited late in the first set. Down 15-20, Rice recorded three consecutive kills to force a UCSB timeout. Along with two service errors by the Gauchos, Rice ended up going on a 5-0 run to tie the score at 20-20, leading to another Santa Barbara timeout.

Eventually the two teams would be tied 24-24, but a UCSB service error and service ace by junior outside hitter Leah Mikesky helped Rice earn the 26-24 win.

Not a consistent factor in the match’s beginning, the emergence of senior outside hitter Ali Barbeau as the game unfolded was perfect timing for the Gauchos’ takeover. Barbeau put on one of her best performances to date, earning her first double-double of the season with 15 kills, 14 digs, and five blocks.

Helping the Gauchos’ seal the second and third sets was their persistent defense. UCSB restricted the Rice offense to .061 and .118 hitting percentages over the two sets.

Continuing her sensational performance from last weekend, freshman libero Emilia Petrachi had a match-high 18 digs. Through two tournaments, Petrachi ranks second in the Big West Conference in digs with 99.

It was a hardcore duel in the fourth set as the Owls attempted to prevent UCSB from closing the game. Despite achieving its best hitting percentage of .375 in the game’s last set, Rice was conquered by the Gauchos’ .432 hitting clip. UCSB’s ability to outhit the Owls led to the Gauchos’ winning the set 28-26 to end the game.

With the game’s first two sets belonging to the Gauchos, it was another stunning performance by Barbeau as she led Santa Barbara for the second consecutive time in kills with 15 and notched a match-high 18 digs.

Making the transition from outside hitter to middle blocker this offseason, junior Elizabeth Sheffield has been a consistent centerpiece for the Gauchos.

She has been the Gauchos’ balance on both offense and defense. Against Yale, Sheffield was responsible for 17 of the Gauchos’ points as she showcased her versatility with eight kills, seven service aces, and three blocks. She currently ranks second in the Big West in hitting percentage at .432.

“I think it’s really cool that I was recognized for that,” she said. “But, I feel like everyone did so well that I think it’s ridiculous to say that I deserved it over someone else because everyone on our team contributed.”

Despite being down two sets to none, Yale did not concede to the UCSB sweep. The Bulldogs managed to rally with a 6-0 run to take a 20-12 lead that paved the way for a 25-15 win in the third set.

Senior setter Kelly Johnson and freshman outside hitter Kelley Wirth tied for a team-high 10 kills. But, the Bulldogs’ effort wasn’t enough to contain the Gauchos .542 hitting percentage in the fourth set to keep UCSB from winning the match.

Able to steal the game’s first and third sets, the Gauchos were simply outhit by the Rams. Specifically, the play of senior outside hitter Franki Darnold and junior middle blocker Layne Self seemed unstoppable.

The two combined for a total of 39 kills as Darnold surpassed the landmark of 1,000 career kills and Layne notched a .571 hitting clip.

“It was just a situation where it was our last game and they came out harder than us,” Head Coach Nicole Welch said.

In spite of losing its last match, UCSB had two other players earn All-Tournament honors along with Sheffield. Barbeau was named the invitational’s Co-MVP and sophomore outside hitter Chanel Hoffman made the team after completing 12 of her 16 attacks for a .625 hitting percentage against Rhode Island.

The Thunderdome will be roaring this weekend as UCSB returns to Santa Barbara to host its own tournament. The Gauchos’ have a game lined up for each day starting this Friday, Sept. 11th-13th. They will face SMU at 7 p.m., No. 18 USD at 4 p.m., and No. 17 UCLA at 2 p.m.