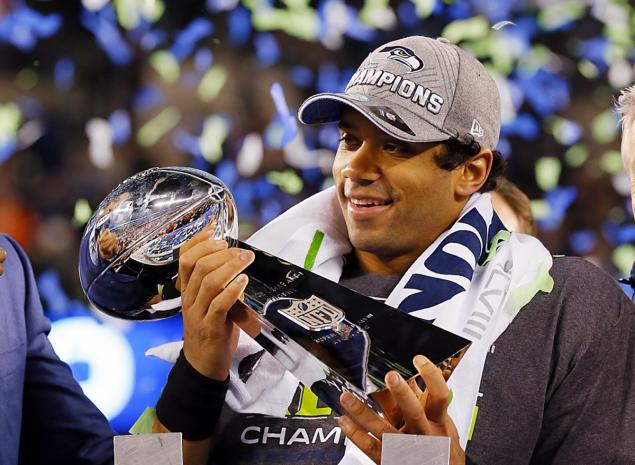 Teams rewarding quarterbacks with massive long-term contracts has become standard within the NFL. Currently, Seattle Seahawks quarterback Russell Wilson is the next candidate in line for a major payday. While some may disagree, Wilson seems to be the ideal frontrunner for young quarterbacks on the brink of sealing the coveted “elite” label.

Constant speculation of the contract negotiations between Wilson and the Seahawks have generated the possibility of him becoming the highest-paid player in the NFL. Despite being drafted as the 75th pick in the third round of the 2012 NFL Draft in which five different quarterbacks were drafted before him, Wilson has proved that he belongs and can survive in the NFL.

Of that 2012 draft class, Wilson, Andrew Luck, Robert Griffin III, Ryan Tannehill are the only names of quarterbacks that are still prevalent within NFL storylines. While Luck was the No. 1 overall draft pick and first quarterback off the board, Wilson has had the most success out of the 2012 draftees.

Entering the final year of his rookie contract with a set salary of $1.5 million, the Seahawks’ field general is well deserving of a multi-year contract that could make him the NFL’s richest man. With quarterbacks like Cam Newton, Tannehill, RG3 earning contract extensions, and Luck with plans of receiving a surplus of money, the legendary slogan of “numbers never lie” is the one thing that separates Wilson from the rest.

Since entering the league in 2012, Wilson’s 36 regular-season wins are the most by any quarterback in his first three seasons, he has an NFL-high 15 fourth quarter/comeback victories, and helped lead Seattle to its first Super Bowl win in franchise history out of two consecutive championship trips.

Despite the controversial play call that resulted with a game-winning interception by Malcolm Butler to secure the Patriots’ Super Bowl victory, it is inevitable that Wilson has completely transformed the Seahawks from being a below average team into a consistent postseason contender. Prior to Wilson’s arrival, Seattle had not won a playoff game since its upset victory versus the New Orleans Saints in 2010.

Besides proving himself as a quarterback capable of competing and winning at the NFL level, Wilson’s dual-threat skillset is another viable attribute that must be valued during contract negotiations.

His combination of being an efficient pocket passer and his playmaking abilities when on the run are what have allowed him to become one of the NFL’s current best quarterbacks. While injuries have plagued the former 2012 Offensive Rookie of the Year in RG3 and Newton possessing these same dual-threat talents, Wilson has perfected the balance between passing and rushing the ball. While the numbers may not show significant changes, Wilson has gradually improved each season in both statistical categories.

However, while Wilson’s performance has been the primary drive behind the Seahawks’ resurgence, the supporting cast of having the NFL’s best defense and arguably best running back in Marshawn Lynch are factors that lead to Seattle’s caution when negotiating the quarterback’s long-term contract.

Whenever Wilson has been unable to produce for Seattle offensively, it has been the Seahawks defense that has carried the load. Primarily led by original “Legion of Boom” members such as Richard Sherman and Earl Thomas III, the Seahawks defense has consistently ranked amongst the top in points, passing, rushing, and total yards allowed.

Commonly known for his “Beastmode” moniker, Lynch’s downhill, gritty running style has definitely made Wilson’s quarterbacking job a lot easier. Despite a slow start to his first year as a Seahawk in 2010, Lynch has rushed for over 1,000 yards in each of his last four seasons.  He tied for an NFL-high 13 rushing touchdowns and finished fifth in total rushing yards with 1,306 this past season.

The fact that Wilson has yet to throw 30-plus touchdown passes or break the 4,000 yard mark for passing in his career may be alarming for some, but it doesn’t mean the man doesn’t deserve his money. With the addition of tight-end Jimmy Graham, Wilson has another weapon in his arsenal that can help elevate his stature on the field.

While some may not even consider him to be a top-five NFL quarterback, Wilson has undoubtedly helped turn Seattle into a winning organization. At the end of the day, the Seahawks must realize how valuable of a steal Wilson has been since his arrival in Seattle and can show their appreciation for him with a new contract this offseason.

I really don’t think the Seattle front office is opposed to paying Russell top dollar and making a statement, I do think, however, that they are trying to be strategic in pushing that payday back a bit through a judicious application of franchise tags (1, possibly 2) over each of the next two seasons, and, then giving him a fully guaranteed 3-year, $60M contract with say $15M in signing bonus. I think that Russell and John are pretty open with each other about what’s going on and where everything is at. Could be wishful thinking on my part, but I… Read more »