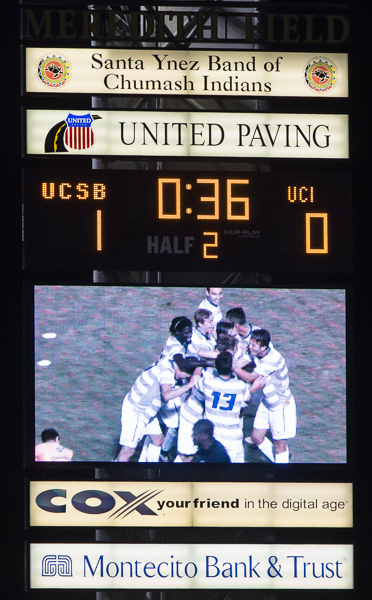 Junior right-handed pitcher Dillon Tate was a dominating force on the diamond for UCSB baseball. His effectiveness and consistency throughout the season played a major role in the Gaucho’s success. Even with various expectations for his performance, Tate lived up to the hype as he ended the year with an ERA of 2.26, 8 wins, and 111 strikeouts. After having such a miraculous season full of rewards and accolades, he is currently projected to be a first-round pick in the 2015 MLB Draft. If so, Tate will become the first Gaucho in UCSB history to be drafted in the first-round.

In an exciting season for the UCSB Women’s Swimming team, Katie Records once again led the show and made a name for herself all year. Records received two MPSF Athlete of the Week honors, countless first place victories in her various races, and now is ranked within the Gauchos’ school record books for both singles and relay events. She finished her season with three individual 1st place victories at the MPSF Championships, earning her team 60 points on her own. This tied for the most points by any single athlete and was enough to help UCSB take 3rd place in the Championship meet.

UCSB men’s soccer returned to form this past season with a Big West regular season title and made it all the way to the second round of the NCAA tournament. Santa Barbara had a total of 12 wins on the season, making it the 13th straight year the program has accomplished double-digit wins for a season. The highlights of the team’s year include a 2-0 win against rival Cal Poly on national television and nine players selected to the All-Big West Team.

Representing the ladies, Women’s Tennis takes the cake for Team of the Year, completing the sweep for UCSB tennis. Going 8-3 in conference, the Gauchos finished in second place in the Big West and reached national rankings as high as No. 50. Like the men’s team, the women found some momentum in the second half of the season posting an 11-2 record to close out the year that took it all the way to the final round of the Big West Tournament. Several players were awarded to Big West teams in both singles and doubles, as well as a few honorable mentions.

Head Coach Andrew Checketts’ devotion to his squad is what paved the way for UCSB baseball’s 40-win season this year. His dedication to make the players and program the best it can be has caught the eye of many within collegiate baseball. Not only did he lead the team to host its first NCAA Regional, but his bid to install new stadium lighting continues his goals of helping UCSB baseball gradually progress as a program. It’s without a doubt that Coach Checketts’ contributions to the UCSB baseball program are unmatched.

When Head Coach Bob Williams saw Gabe Vincent play before he committed to UCSB, he knew right away that the freshman recruit would be the Gauchos starting shooting guard. Surely enough, Vincent did not disappoint as he earned Big West Freshman of the Year and was one of four players to average double-digits in scoring with 10.1 points per game. Throughout the season, he showed his ability to take over the game and deliver in the clutch with a game-tying three pointer against Southern Methodist and a game-winning bucket versus Hawaii. With Alan Williams gone, Vincent looks to be the program’s future.

Coming to Santa Barbara, California from her hometown of Vaucresson, France, freshman Lou Adler has had a successful adventure in her first year at UCSB. Despite a mid-season injury, Adler was still able to break into national rankings at No. 93 and end the season on a three-match win streak. She played all of her matches this year for the Gauchos on the number-one ranked court and helped them to a phenomenal season that saw them reach the Big West Tournament Final.

Despite being limited by a shoulder injury for a chunk of the conference season, Alan “Big Al” Williams still managed to be the most dominant big man in the Big West. Big Al earned his third straight Big West First-Team honor and became UCSB’s all-time leader in rebounds along the way. The double-double machine averaged 17.3 points per game and 11.8 rebounds, but it was his tenacity on defense and passing from the post that really separated him from other centers in the country. Big Al’s legendary career as a Gaucho may lead to his name being called in the 2015 NBA Draft on June 25.

While an injury prevented senior Shelby Wisdom from wreaking havoc on the mound this past season, her UCSB career ends with an undoubtedly remarkable finish. She will leave Santa Barbara with the honors of being named to an All-Conference team in all four of her seasons and ranks within the top-10 of six different statisitcal categories in the Gauchos’ record books. The 2014 season was another milestone filled year as she hit a career-high .304 batting average and became the fourth player in UCSB softball history to hit 10 homeruns in a single season.

UCSB trailed by as many as 13 points against Hawaii, but down with five minutes left, the Gauchos hit four straight three pointers to take its first lead of the half. Holding on to a one-point lead with just seconds left, freshman guard Gabe Vincent hit a fade away jump shot to extend UCSB’s lead. Hawaii managed to tie the game with a second left, but upon review, Hawaii’s made three point shot was ruled only a two pointer, giving Santa Barbara a 75-74 comeback win in front of 4,383 fans in the Thunderdome.

Of midfielder Nick DePuy’s six game-winners this past season, perhaps none was more memorable than his first. With under a minute to go in a 0-0 draw against No. 3 UC Irvine at Harder Stadium, DePuy blasted in an incredible goal from 35-yards out to seal the win and get UCSB off to a perfect 2-0 start in conference play. The goal came in his first start of the season at forward – a position he would remain at for the rest of the year.

Before the beginning of the 2014 season, midfielder Andy Perez agreed to redshirt for his sophomore year, planning to develop his game more before using up another year of eligibility. However, numerous injuries along with a four-game winless streak had the Gauchos in fear of missing out on the Big West Tournament altogether. With just five games left in the season, Head Coach Tim Vom Steeg turned to Perez to fill the void in a vacant midfield, believing that he could be the spark to lift the team to a Big West title. In his first game against Sac St. and in what he called “one of the coolest moments of [his] life,” Perez scored the opening goal, the first in his NCAA career, sparking a run in which UCSB went 3-0-1 to close the season and finish with the best conference record in the Big West.

Nick DePuy didn’t start the year as one of UCSB’s primary offensive targets, but after making the move to forward midway through the season, he quickly proved that he probably should have been there a long time ago. The near-unstoppable forward notched a team-high 10 goals, including an insane six game-winners to lead his team to a No. 1 seed in the Big West Tournament. His performances earned him the honors of Big West Offensive Player of the Year and a pair of National Player of the Week awards.

While many may not have expected his emergence, senior outfielder Cameron Newell led Big West leaderboards all season with a career-best, .368 batting average. He nearly doubled his total hits from last season and hit the only three homers of his Gaucho career during this past season. Newell also became the first Gaucho in team history to win the Big West Field Player of the Year award.

Nathan Eshmade had been on a hot streak at home and had just taken wins in both singles and doubles to secure his team’s victory at a home match that was hosted by a sorority. On being asked if he feeds off of the energy of the home crowd, the Aussie native had this to say. “The crowds are great. I mean you got all these pretty girls out here, calling out to you, so you gotta look at them like, “YEAH!! I just won that point!,” and they yell back and you keep going off of the energy and that really helps us.”

A member of UCSB’s men’s swimming backstroke unit, junior Josh Smith has earned himself a charming honor. While he has had a great impact on the team with his performance in the pool, Smith’s achievements outside of swimming are impressive as well. He was selected as one of 160 participants to receive an internship at the Cannes Film Festival in France.

Even when suited up in her women’s soccer uniform, junior defender/forward Savannah Francis is the other enchanting Gaucho to earn this award. Starting in 16 of the Gauchos’ 19 games, Smith ended the year with a total of two goals and one assist.

For those of you who wouldn’t think that a tennis player should deserve this award, you have not met Morgan Mays and luckily will probably never have to step foot on a court with him. For if you did, you would be first faced with a 120 MPH serve coming over the net at full force. And, if you were at all blessed to lay your strings on it, you would be faced with an even more deadly line-drive return powered by his aggressive baseliner style. Mays is a Bulldog and he will let you know when he barks at you following every point he slams in your face and onto the concrete. With the thunder that he brings to the court every match, there is no question why the man called “The Beast” is this year’s winner for Most Badass.