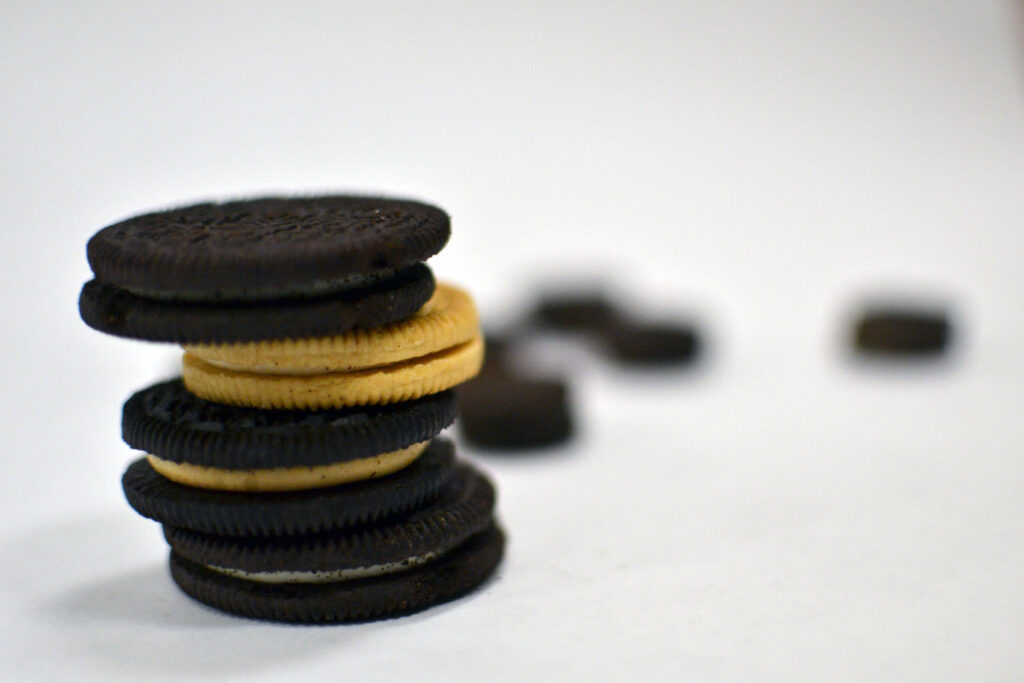 A return more anxiously awaited than the next season of “Sherlock,” the Candy Crew is, indeed, bringing you morsels of advice about morsels of sweet, sugary goodness. Today, Sugah Mama, Salty But Not Sweet, Let’s Choc’ About It, Sweetie Pie and a few special guests delve into Oreos.

Although aware of the over-30-and-growing varieties of milk’s favorite cookie, we stuck with the humble selection available at I.V. Deli Mart so you have a guide (of sorts) when your sadness-fueled, stress-induced binge-eating Finals Week cravings drive you to the most accessible junk food dispensary. Sugah Mama braved the judgmental glances of Isla Vistans to bring Original, Double Stuf, Mini, Peanut Butter, Mini Reese’s and Golden Oreos back to the Candy Crew for their expert assessment. We didn’t even pretend to fuck around with the store brand. Ain’t no use, hun. The only thing those are good for is chasing unhealthy amounts of Fireball in an Anacapa dorm room, then throwing them up in a horror-film-reminiscent show of black projectile vomit. (Sugah Mama has seen it happen.) In any case, with butcher paper spread out across the floor of the Daily Nexus office to take notes and provide a sanitary cookie-tasting surface, the Crew sat down with no milk, but lots of expectations.

However, before we begin our review, Sugah Mama feels it’s important that you know what kind of Oreo consumer you are. If you have a sweet tooth that cannot be quenched, and if the inner child in you cries if you don’t tear open the cookie and lick out the frosting, you’re a Sweetie Pie. Are you a sarcastic, outdoorsy human with the metabolism of a pubescent male? Stuff a whole Oreo in your mouth and read Let’s Choc’ About It’s side of the story. If it’s subtlety and artisan-crafted flavor you appreciate, pay attention to the opinions of Salty But Not Sweet. For those of you who aren’t quite sure and just want an excuse to go buy Oreos, Sugah Mama will let you know what’s good.

We probably don’t need to tell you what an original Oreo tastes like. If you’ve never had one before, Sugah Mama will assume that you only crawled out from beneath that rock you’ve been living under long enough to grab this issue of the Nexus (in which case, she still respects your priorities). However, the Crew did do some special investigating. We’ve all seen the overlooked factory reject in the box, the ugly duckling, the one that has one of the cookies flipped inside out. Let’s Choc’ About It found that this inversion significantly screws with the Oreo experience.

“It confuses the taste buds,” he says, looking as concerned as one can while eating an Oreo (i.e. still pretty dang happy-looking).

To give a quick overview of the original, though, here are some general thoughts:

“Classic. Simple. Good.” Let’s Choc’ About It said — just what Sugah Mama was thinking. Additionally, Choc’ advises against eating them all in one bite. They are, apparently, too dry for this tactic.

“Tastes like America!” Salty But Not Sweet accurately proclaimed.

Sugah Mama herself is more of a cookie than a filling fan, so a plain ol’ Oreo hits the spot. In fact, for all those with similar preferences, Sugah Mama recommends finding a Sweetie Pie-esque buddy to split cookies with. Crack open a few sandwiches and give your bud the frosting side. Save one for yourself and improve that ratio to your liking with more cookies. Everybody wins.

Okay, before beginning, Sugah Mama feels it is necessary to disclose the fact that half of the Candy Crew is comprised of Nexus copy editors and, therefore, have a predisposed dislike toward “Double Stuf” Oreos. Why only one F???? “Stuf” is not even a word. Still, despite her profession, Sweetie Pie could not contain her pleasure.

“There’s so much frosting, it fills my mouth with happiness!”

“Double Stufs are regular Oreos. Regular Oreos are just … not,” The Candyman agreed.

Although, as a grammar enthusiast, Sugah Mama is boycotting Double Stuf Oreos partially for the same reason she avoids shopping at Rite Aid and Toys “backward R” Us, she also just kinda doesn’t like ’em. There is waaaay too much frosting. One bite of Double Stuf gives that same feeling of self-loathing and sugar-overdose that one usually doesn’t feel until spending a solid hour hanging around the snack table at a nine-year-old’s birthday party. Of course, this was very subjective to preference. The popular opinion seemed to comply with Sweetie Pie’s, save for Salty But Not Sweet and Sugah Mama herself.

“So much high-fructose corn frosting. Why?” Salty But Not Sweet wondered aloud.

“I just love Double Stuf so much, it makes me sad you guys don’t like them,” Peppermint Patty said, disagreeing.

And if you’re that weird kid that sits in the corner, eats glue and stuffs entire Oreos in their mouth all at once, Let’s Choc’ About It is here to impart some wisdom: “At first, too much frosting, but when engulfed whole, the icing balances the cookie-ness.”

These are the absolute bomb dot com. No … dot gov. That shit’s official. I stand by my high cookie-to-frosting ratio preference and, thus, flippin’ love Mini Oreos. Let’s Choc’ About It’s only comment was, “I just want more,” which Sugah Mama very much understands. Meanwhile, Sweetie Pie pouted.

“They’re so damn small. Waaaaay too much cookie per filling. There’s barely any filling. Where’s all the filling? Only half of my mouth is happy,” she said.

This was one cookie the majority of the Crew could come to a consensus on. That consensus was that these sucked butt. Given, expectations were high. Growing up in the “Parent Trap” era (Lindsay Lohan remake, of course), we’ve all tried peanut butter on an Oreo — which is uh-may-zing — and were hoping that the Peanut Butter Oreo would be the answer to our prayers. It was not. For whatever reason, Nabisco decided to change up the cookie to a less-yummy, strangely crunchy (in a bad way) kind.

“The cookie by itself tastes like it has been dipped in gasoline,” Sweetie Pie said. “Why have you done this, Oreo?”

“Peanut Butter Oreos are only good for the filling,” Fondude agreed. “Original is best.”

Sugah Mama found that the cookie by itself was lame, as was the filling but together, they were much less lame. Not less lame enough to justify the calories, though. Just pull a Hallie-and-Annie and smother a regular Oreo in your favorite brand of peanut spread.

“They make me sad. Sugar overload. I feel like I will transform into a golden baby with glowing wings and a bow that shoots arrows of disappointment,” Sweetie Pie said.

Meanwhile, Let’s Choc’ About It proves, in fact, that you can look sad while eating a cookie, saying, “I don’t even want to describe them. They’re just so disappointing.”

Salty But Not Sweet declined to comment on the Golden variety because she “burped Costco pizza while eating it.”

Given the general disappointment the Candy Crew faced at the regular-sized Peanut Butter Oreos, we had generally given up hope on these. Perhaps it had something to do with the Reese’s brand peanut butter, or perhaps the cookie-to-filling ratio (this time the cookie was of normal crunchiness and flavor, thank God), but whatever it was, these went over much better with the Crew. Still, this isn’t saying much. Nearly everyone agreed that Mini Reese’s Oreos were the equivalent of a chocolate Nutter Butter, but not quite as good. The general verdict on this variety was: Either get Nutter Butters or get Oreos; these are a lame version of both.

For those of you unfamiliar with Heads or Tails, this sandwich is comprised of one vanilla cookie and one chocolate cookie, filled with a hearty “double stuf” heap of frosting. Given her distaste for Golden Oreos, Sugah Mama hardly wanted to try these. Oh, was Sugah Mama surprised.

The wafers were somehow softer and crumblier than the average Oreo. The filling that Sugah Mama deemed overkill on the regular Double Stuf Oreos mingled in a beautiful melt-in-your-mouth duet of chocolate and vanilla.

“Soft and comforting, like Mama made it in her high fructose factory,” Licked and Dangerous said.

Mega is essentially a triple-stuffed Oreo. Unsurprisingly, everyone found this completely unpalatable, save Sweetie Pie and Peppermint Patty. Unless you want to feel like you just put a handful of powdered sugar and glue in your mouth, skip the Megas.

“Biting into this causes instant splooge in your mouth,” Salty But Not Sweet said of the unsettling texture.

“You have to eat two: the first time it’s new and interesting, and the second time you can actually formulate an opinion,” Let’s Choc’ About It said.

“No, the first time you kinda like it, and the second time, you realize it’s disgusting,” Sweetie Pie said.

Surprisingly, resident sugar-addict Sweetie Pie did not, in fact, fancy the Birthday Cake flavor. If that doesn’t say “stay away,” I don’t know what does. While Sugah Mama truly did enjoy the first Birthday Cake Oreo, Choc’ was smart to have the Candy Crew make a judgement based off of our second mouthful. The flavor revisited tasted similar to how Sugah Mama imagines sugary lighter fluid would taste.

Sugarplum Gary had this to say about the completely chocolate cookie sandwich: “Reminds me of those little cups of chocolate ice cream for lunch from elementary school. Like it’s chocolate, but not really. I don’t know if it’s good or bad.”

For the most part, the Crew agreed that Chocolate Oreos did not pack the cocoa punch they expected, and most of us would rather opt for an original.

And that concludes the Candy Crew’s tour de Oreo. Just by sitting here, reading this article, your resting metabolic rate has burned about 40 calories … that’s almost an entire Oreo’s worth of calories (45 calories)! So go treat yo’self. You deserve it, champ.