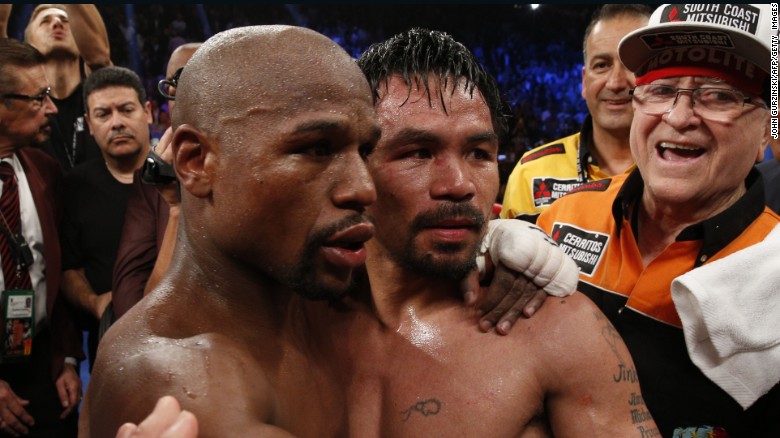 The long-awaited fight between Floyd Mayweather Jr. and Manny Pacquiao happened this past Saturday, but has some viewers feeling unsatisfied. While Mayweather improved his undefeated record to 48-0 by unanimous decision, there are various complaints of the champ not giving viewers their money’s worth.

For a fight that costs viewers $100 to order on Pay-Per-View, people feel robbed of what was supposed to be the “Fight of the Century.” Instead, fans were given 12 rounds of Mayweather strategically picking Pacquiao apart. Tweets by boxing legend Mike Tyson and Super Bowl champion Aaron Rodgers, claiming the fight was “#Underwhelming” may be the disappointed explanation of many.

While the names of both boxers held more weight than the actual fight itself, did people really expect the fight to end differently?

Viewers should have known that this fight would last for 12 rounds without many damaging blows or a knockout. Notorious for his defensive capabilities, Mayweather clearly is not an aggressive fighter like Pacquiao. Eight of his last 10 fights have lasted for a full 12 rounds, two out of those 10 resulted in Mayweather winning by knockout and technical knockout.

At the end of the day, Mayweather’s primary focus was to beat Pacquiao and collect the nine-figure check that he and his “Money Team” bargained for. But, the heart and desire of Manny Pacquiao to please his fans with a fight everyone waited for must be given credit.

Although Mayweather claimed that preparing for Pacquiao was no different than any other fight, it can almost be guaranteed that “Money” Mayweather didn’t believe that himself. His graceful attitude leading up to Saturday night had many questioning if Pacquiao really had the champ shook coming into the fight.

As the aggressor in Saturday’s fight, Pacquiao had an energetic start to the match. As he and Mayweather traded rounds, it was Pacquiao’s dominating round four performance that continued the flurry of “Manny” chants.

A stiff jab to the head left Mayweather staggered and was a wakeup call for rounds to come. Combinations of power punches followed whenever Pacquiao could get Mayweather on the ropes.

It was expected that in order for Pacquiao to win Saturday’s fight, he would have to overpower Mayweather with his aggressive style. While a toe-for-toe brawl between the two is what everyone hoped for, Mayweather’s defensive actions would never allow this to happen.

Constant clinching and waiting for Pacquiao to give in are tactics that upset viewers. There’s this empty feeling that many believe Mayweather has yet to stop “running” from Pacquiao. Still, the statistics prove that Mayweather was the better fighter Saturday night as Pacquiao struggled to connect with his punches.

According to the man himself, Mayweather’s last fight will be in September before he hangs up the gloves and officially retires. With plans of relinquishing all five of his titles, it will be interesting to see if he can end his career unblemished of defeat and possibly tie Rocky Marciano’s 49-0 overall record.

As for Pacquiao, what’s next in the fighter’s future is undetermined. After fighting in his 65th match at the age of 36 years old, it may be time for Pacquiao to say goodbye to the ring as well. His claim of fighting with an injured right shoulder is one sign of father time telling him that his career is coming to a near end.

While the fight may not have lived up to its hype, the chances of another boxing match being a monumental event in sports is unlikely as the sport of boxing gradually declines. People have to accept the fact that the hard-nosed, ruthless style of boxing that existed once with Tyson, Muhammad Ali, and other boxing legends ended decades ago.