The Daily Nexus
Sports
Fight of the Century: Pacquiao vs. Mayweather
April 30, 2015 at 5:06 am by Sean White 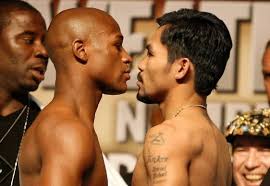 While the bout may be six years overdue, boxing fans worldwide will finally receive the moment they’ve all been waiting for. With Mayweather’s WBC and WBA welterweight championships belts up for grabs against Pacquiao’s WBO belt, it’s the essential fight that many consider will finalize the legacy of either boxer.

Unlike a majority of his fights, it seems like “Money” Mayweather may be finally meeting his match heading into Saturday. Looking to extend his undefeated streak and self-proclaimed title of being boxing’s best, the tale of the tape has Mayweather and Pacquiao matched up pretty evenly.

As the prime of both boxers’ careers comes to nearing an end, Saturday’s match remains as a fight between the top two fighters in boxing. Mayweather, at age 38, is just two years older than Pacquiao (36). Other assets such as height and reach possess more significance when comparing the two.

Mayweather has the upper hand in both categories at 5’8” and a five-inch advantage in reach at 72.” Although Pacquiao stands at 5’6 ½” with a reach of 67,” his left-hand fighting stance, better known Southpaw, is the primary concern for “TMT’s” head honcho.

Known for being a defensive guru that has mastered the art of counter-punching, Mayweather has constantly outsmarted opponents with his patient approach. He tends to bait opponents while ducking and dodging until he finally finds that “sore spot” to pick at. Apparently this technique has been of value with the result of no losses, but Mayweather just might have to step outside of his comfort zone in his duel with the “Pacman.”

It has been nearly three years since Mayweather’s last knockout. His controversial knockout of Victor Ortiz is the lasting glimpse we have of Mayweather putting someone on the canvas. Although Mayweather is known for his defensive trademark, earning his 48th victory may come down to a knockout.

His advantage in reach possibly will provide him with the sufficient amount of spacing to put Pacquiao to sleep. But the pursuit of a knockout comes at a price as Pacquiao will undoubtedly stun Mayweather with some punches if he decides to become more offensively dependent.

Pacquiao is known for his attacking style in the boxing ring and seems ready to go toe-to-toe with Mayweather. His aggressiveness to throw punches and land them will be key in the fight.

Pacquiao contains a more lethal power punch than Mayweather, but it’s the amount of punches per round that he can land that is key. His ability to consistently outpunch Mayweather could be of benefit on the judges’ scorecards. Still, Pacquiao must remain accurate and not allow his aggressiveness to become reckless punches that could be beneficial to Mayweather.

While the heroic story of Pacquiao, the “good guy,” beating Mayweather the “bad guy” would be a heartwarming ending to the ongoing beef between the two, let’s be realistic. Since his last loss in the 1996 Atlanta Olympics, Mayweather has catapulted boxing to a new platform with his dominance and will expand his legacy with a win Saturday evening.

Mayweather versus Pacquiao has the potential to be the best fight this generation will see. All the “what if’s” and hopes of the two will finally be put to rest on Saturday when the two best pound-for-pound fighters meet.

A version of this article appeared on page 11 of April 30, 2015’s print edition of the Daily Nexus.