The Daily Nexus
On the Menu
Gourmet Gauchos Converge for Taste of UCSB
April 28, 2015 at 5:00 am by Allison Wright

Despite morning drizzles and afternoon winds that blustered across UCSB’s Science Green, hundreds of graduated Gauchos convened for a special celebration of all things delectable. As an event associated with this past weekend’s All Gaucho Reunion, The Taste of UCSB presented by Montecito Bank and Trust brought over 40 Gauchos from the food and beverage industry together for a feast of samples. From brewers and vintners to caterers and restaurant owners, the collection of gourmet Gauchos wooed fellow alums with beer, wine and food while musical acts Dad Clothes and Dave Pascoe serenaded each sip and bite.

Upon entrance to the barricaded green, which housed four large tents, each home to 12 vendors, guests received a blue-tinged souvenir wine glass and a map describing the varying food and beverage options mere steps away. While many map booklets decorated the trodden grass by the end of the afternoon, the wine glass proved a necessity, since the majority of the Gaucho vendors specialized in alcoholic beverages.

Of the 48 stalls, 27 hosted businesses from alumni, including local eateries such as Salty Girl Seafood and Enterprise Fish Company, as well as brewers at big names such as Firestone Walker and Hollister Brewing Co. Not surprisingly for the Santa Barbara area, the majority of vendors had bottles upon bottles of wine on hand, leaving the end of the afternoon not unlike midnight on D.P., albeit with better taste in alcohol and more clothing. Needless to say, once a Gaucho, always a Gaucho. 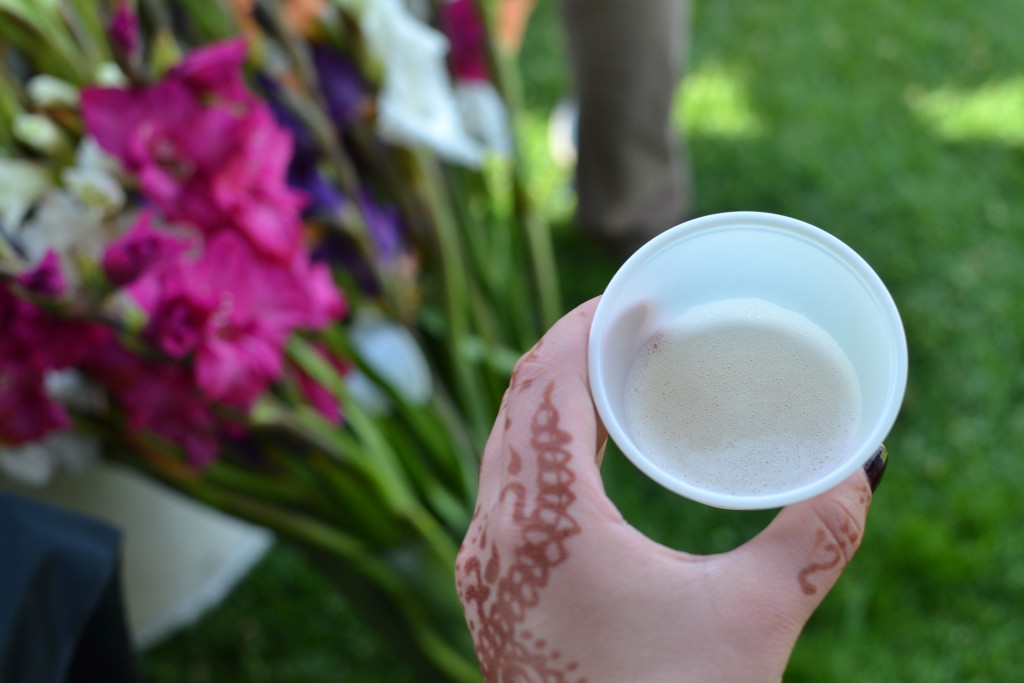 South Coast Deli offered small bowls of salad, as well as their latest on-tap kombucha, which includes notes of strawberry. For those skeptical about the fermented tea-based beverage, South Coast’s selection is a gateway “booch.” Without the compost-like smell that some kombuchas emit, this one was more like a summery lemonade than a hard-core probiotic cocktail. Allison Wright/Daily Nexus 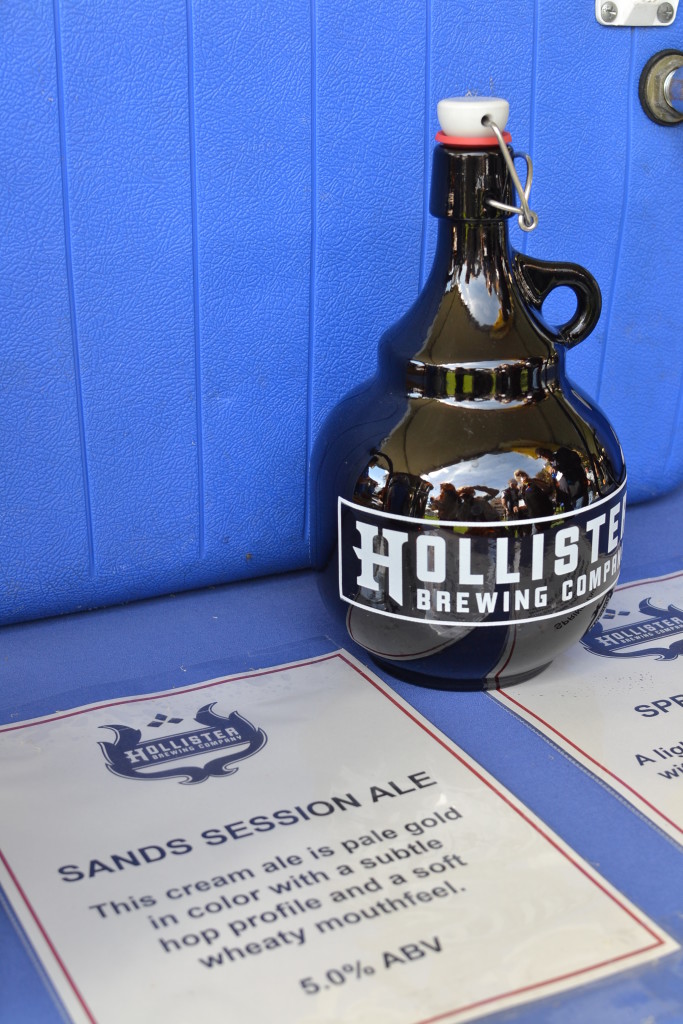 In addition to serving a standard IPA, Sean Guerin (class of ‘02) represented Hollister Brewing Company with a lavender and white peppercorn spiked saison called Spring Fling, as well as their subtly hopped Sands Cream Ale. The seasonal saison poured an opaque, pale yellow with a creamy head. Light and citrusy with notes of spice, it was refreshing without losing any intensity of taste. Allison Wright/Daily Nexus 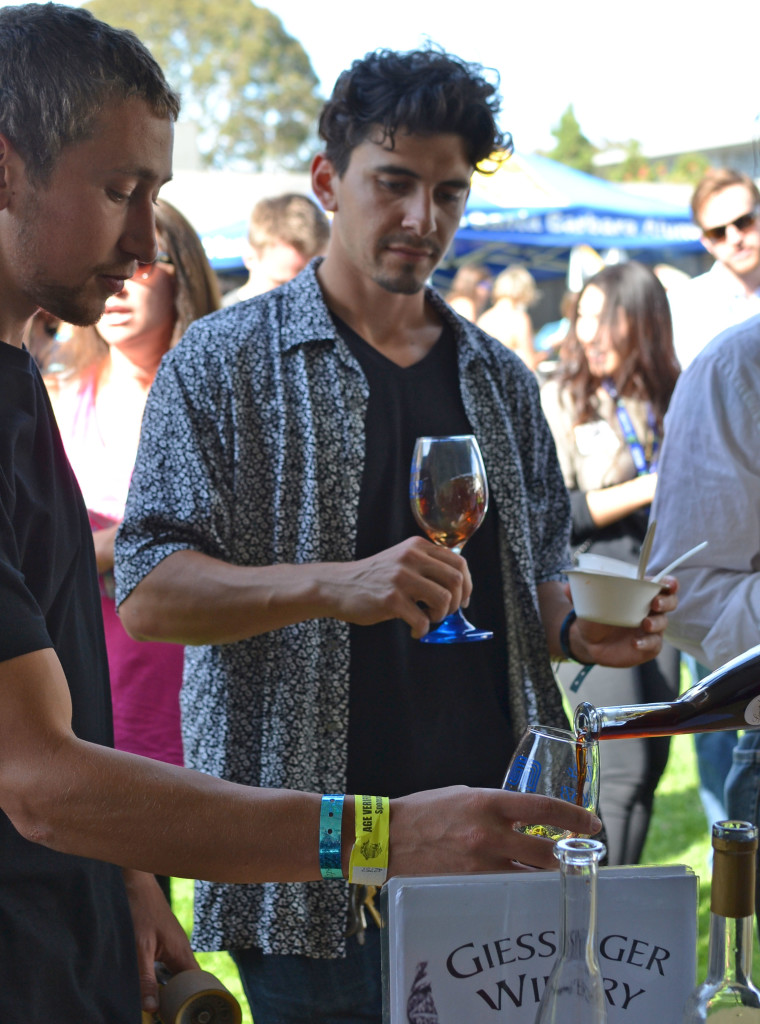 A Gaucho alumnus swirls a glass of limited vintage while Edouard Giessinger divvies up an ample taste for his friend. Giessinger Winery, which is located on State Street, aims to create a wine-tasting experience worthy of “the most lush regions in the world.” One wine on hand was a 15-year-old port aged to 40 proof. The roasted-eggplant colored dessert wine was highly viscous and deeply aromatic. To some, a sip seemed like adult-candy, so much so that Giessinger had order forms ready for potential buyers to reserve the moderately priced wine at the venue. Allison Wright/Daily Nexus 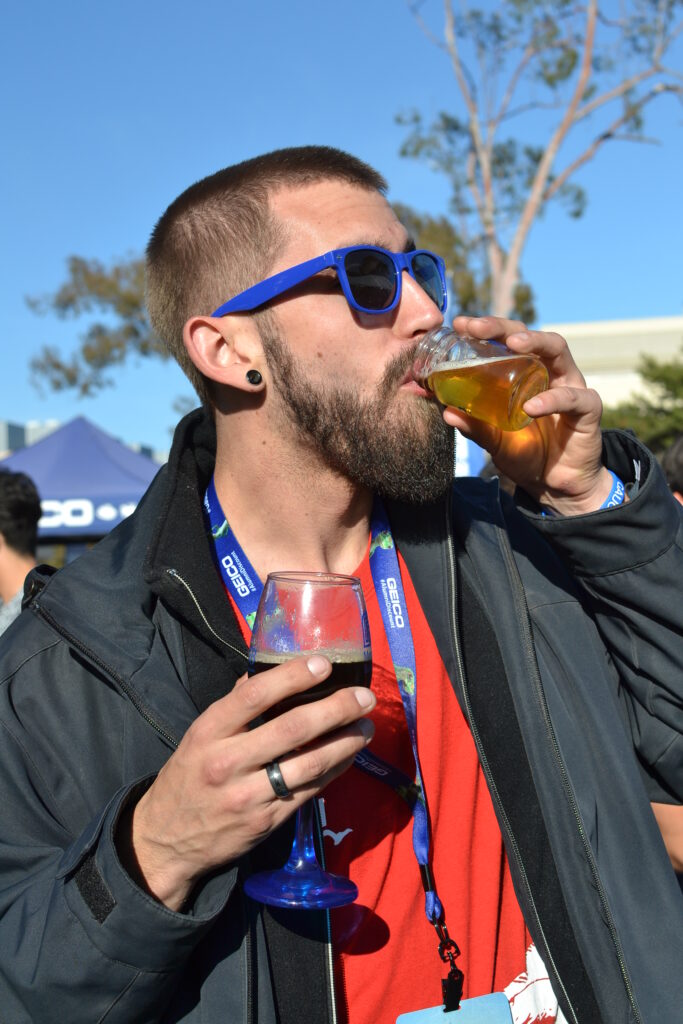 Recent graduate Xander Black upholds a time-honored Gaucho tradition. In one hand, he holds a beer from Beachwood BBQ Brewing, and in the other, he has Figueroa Mountain’s Hoppy Poppy IPA. Fig Mountain’s co-owner, Jaime Dietenhofer, graduated from UCSB in 2002. The brewery’s California Kolsch “101,” which under the name Jalama Blonde received medals two years in a row at the Denver International Beer Competition, was also on tap. Allison Wright/Daily Nexus 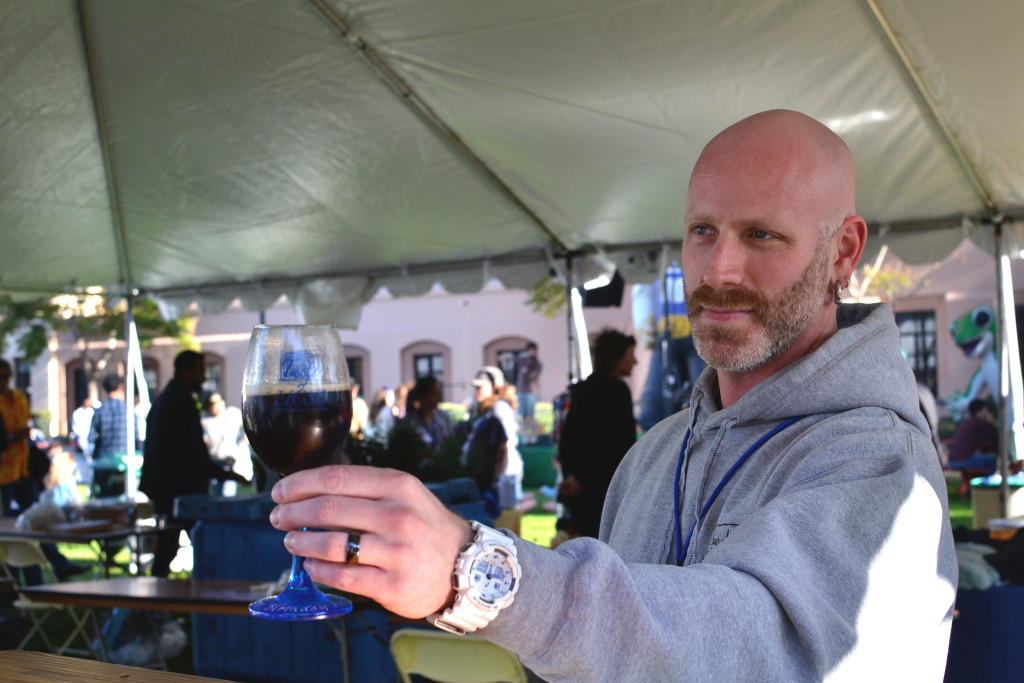 Julian Shrago presents an oak-casked ale. Shrago graduated 15 years ago with a degree in mechanical engineering and worked as an aeronautical engineer before pursuing a career in brewing. Although he isn’t the sole founder of Long Beach’s Beachwood BBQ, he rocketed their brewing presence to prominence with a number of wins at the Great American Beer Festival. Shrago can be considered nothing short of prolific, and consistently keeps 12 of Beachwood’s 36 taps stocked with his own brews. Allison Wright/ Daily Nexus 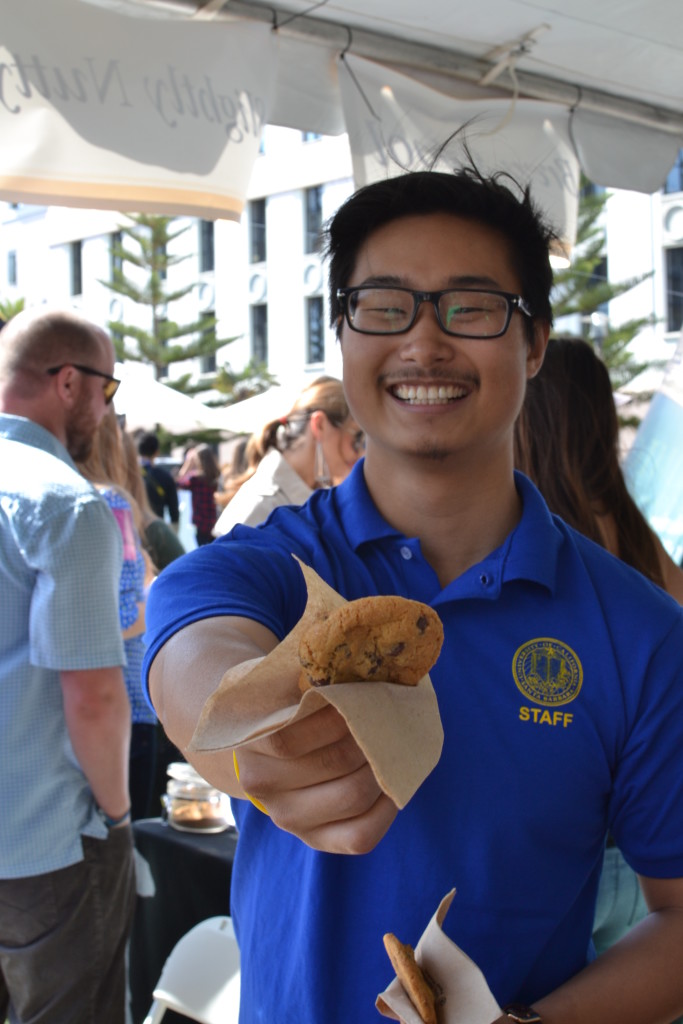 A staff member from UCSB’s Housing and Residential Services presents a chocolate chip cookie. The campus’s dining commons employ large numbers of future graduates. Unfortunately for this member of the dining commons team, snacks and cuisine were much less popular than the vast selection of beer and wine. Allison Wright/ Daily Nexus 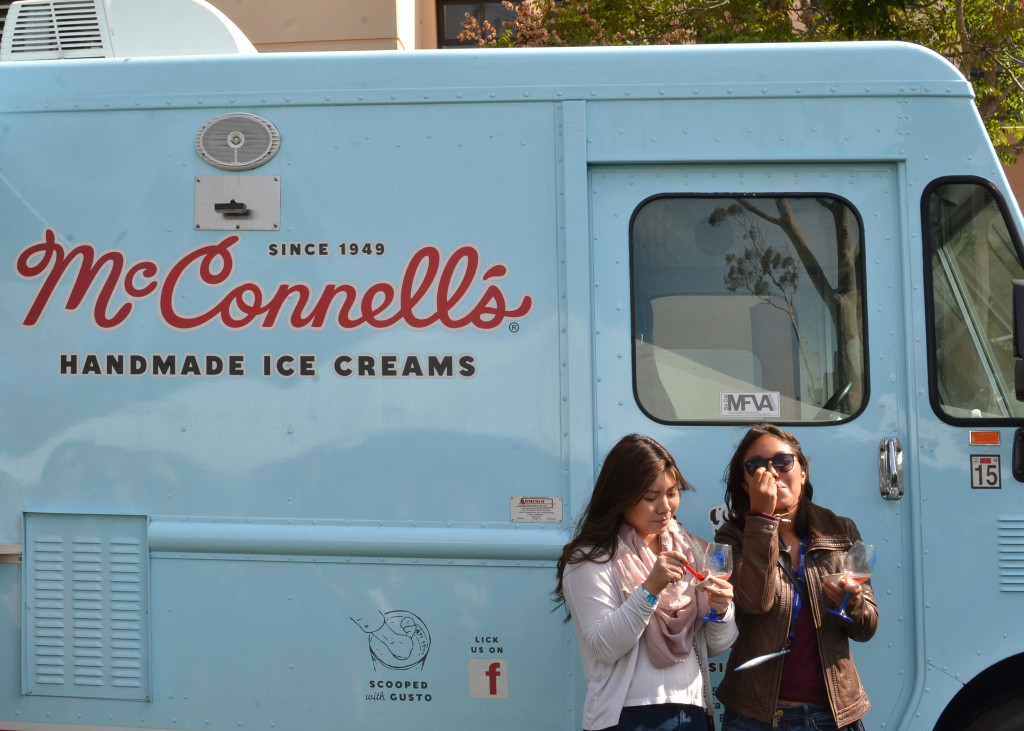 Sponsored by Yardi Systems, a McConnell’s truck offered sample sizes of some of their most popular flavors, including Eureka lemon and marionberry, as well as olive oil and salted almond. Allison Wright/ Daily Nexus 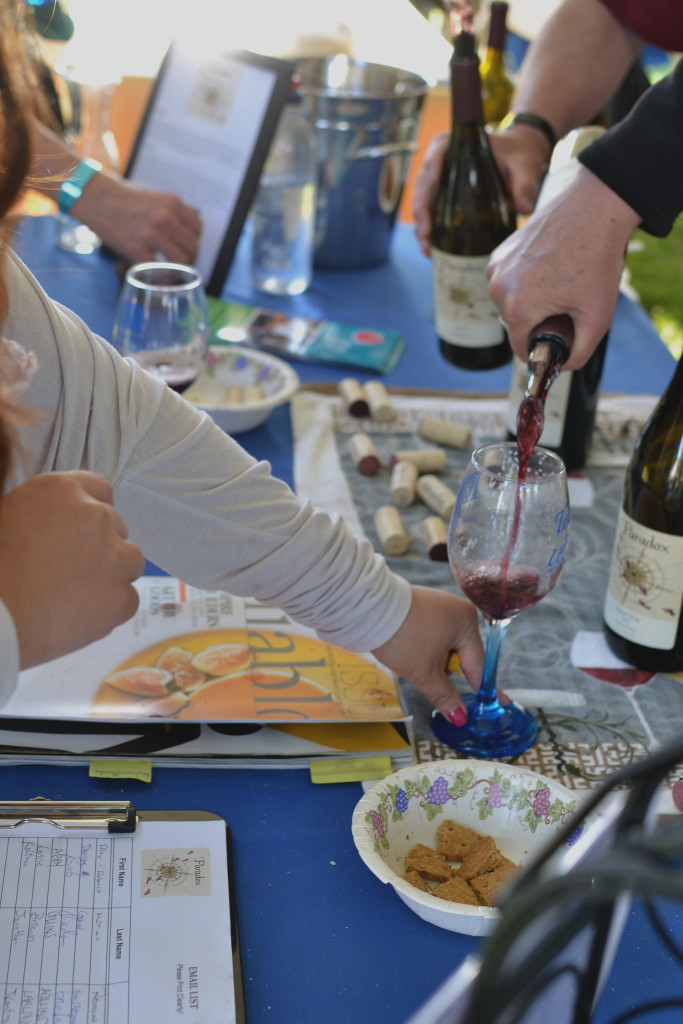 Paradox wines continued to pour, even when more corks adorned their table than informational materials. Graduate Dominic Reo began this urban winery with a group of fellow enthusiasts in Berkeley over 10 years ago. Their goal? “Make the types of wines that we imagined could be made.” Although Paradox has yet to open a tasting room, their wines are available commercially through the East Bay Vintners Alliance. Allison Wright/ Daily Nexus