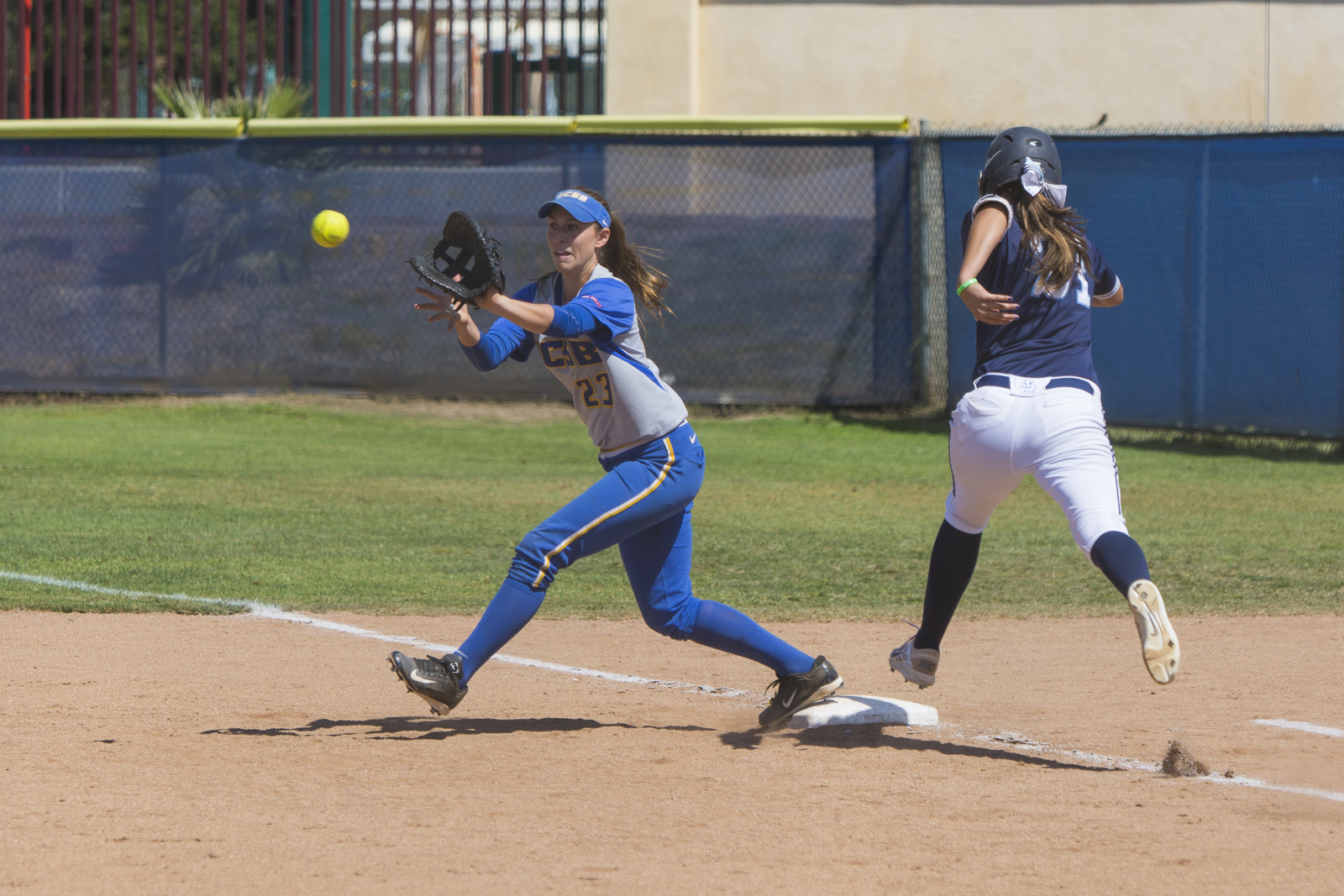 Samantha Stark reaches for the ball to get the runner out. Dustin Harris/Daily Nexus

The UCSB softball team went 1-2 this weekend against conference opponent Cal Poly. The Gauchos lost Friday’s opener by a score of 5-3, but turned around to win Friday’s late game by a score of 4-3. UCSB would eventually fall in Saturday’s finale by a score of 9-4.

Cal Poly came into this weekend fresh off a three-game losing streak after getting swept by Cal State Northridge last weekend. However, the Mustangs’ hot bats were enough to steal the series.

In Saturday’s game, Cal Poly jumped out to a 5-0 lead in the bottom of the first following a two-run home run by sophomore outfielder Courtney Tyler and two back-to-back RBI singles.

However, Cal Poly would eliminate the hopes of a UCSB comeback in the bottom of the second after junior outfielder Betsy Colburn hit a three-run triple to put the Mustangs up 8-2.

The Gauchos won a tight one in Friday’s late game. UCSB jumped out to a quick lead following a three-run second inning. The Gauchos would add to their lead in the top of the seventh following a solo home run by junior infielder Arianna Palomares.

Cal Poly was shut out through the first six innings before giving the Gauchos a scare in the bottom of the seventh. Following a home run by Hyland, an RBI double by sophomore Ashley Tornio and a fielder’s choice, the Mustangs cut the lead to just one.

However, junior pitcher Ashley Ludlow came in and pithed a near perfect seventh inning to neutralize the threat. Pingree was awarded the win for UCSB after giving up three runs in six innings pitched, and freshman Lindsey Chalmers took the loss for Cal Poly after pitching a complete game.

In Friday’s opener, Cal Poly jumped on the Gauchos early and UCSB was simply never able to come back. After sophomore outfielder Jacqueline Hinojosa hit an RBI single to give UCSB a one-run lead in the top of the third, Cal Poly delivered a four-run inning in the bottom of the third to take the lead.

The Gauchos made one last attempt to come back in the top of the seventh, but it was simply too little too late. Down 5-1, Clark hit an RBI single and UCSB scored on a fielder’s choice to cut the lead to just two. However, the rally would fall short and the game would end with a Cal Poly victory.

Although the series was lost, UCSB did show bright spots this weekend. Ludlow pitched fantastically, only giving up four runs across 7.1 innings pitched this weekend. Senior utility Shelby Wisdom also remained hot with the bat, hitting her seventh home run of the season.