The Daily Nexus
On the Menu
The Pros and Cons of the Four Dining Commons
April 2, 2015 at 4:59 am by Lianna Nakashima

Every year, a debate rages along the halls of the dorm buildings. Which dining common beats out the rest? We all have our opinions, and those who have already passed the on-campus living experience likely remember their own preferences fondly. On The Menu decided to find out for sure. For this year’s freshman class, does Portola suck as much as everyone claims? Does Carrillo really serve the best food? Whether you’re a freshman formulating your own favorites or an upperclassman hanging on to a hatred for one dining common or another, see how this year’s results compare to your own opinions!

One hundred and seventy-seven people clicked on the link to my survey, but only 134 students responded. According to the survey I conducted, Ortega and Carrillo are the crowd favorites with a one percent difference as 37 percent and 36 percent, respectfully. De La Guerra trailed behind with 22 percent of the votes while Portola lagged with only 4 percent. Of the voters’ residence hall demographic, 97 votes came from residents living in the Chi-Five dorms, 10 from San Rafael or Manzanita and 40 from Santa Catalina. Although upperclassmen were not represented, Carrillo’s representation in the stats proves to lowerclassmen and upperclassmen alike that it’s worthy of recognition. Since simply asking which dining common is the best would be too broad, I also inquired about atmosphere as well as which one is best for each type of meal. 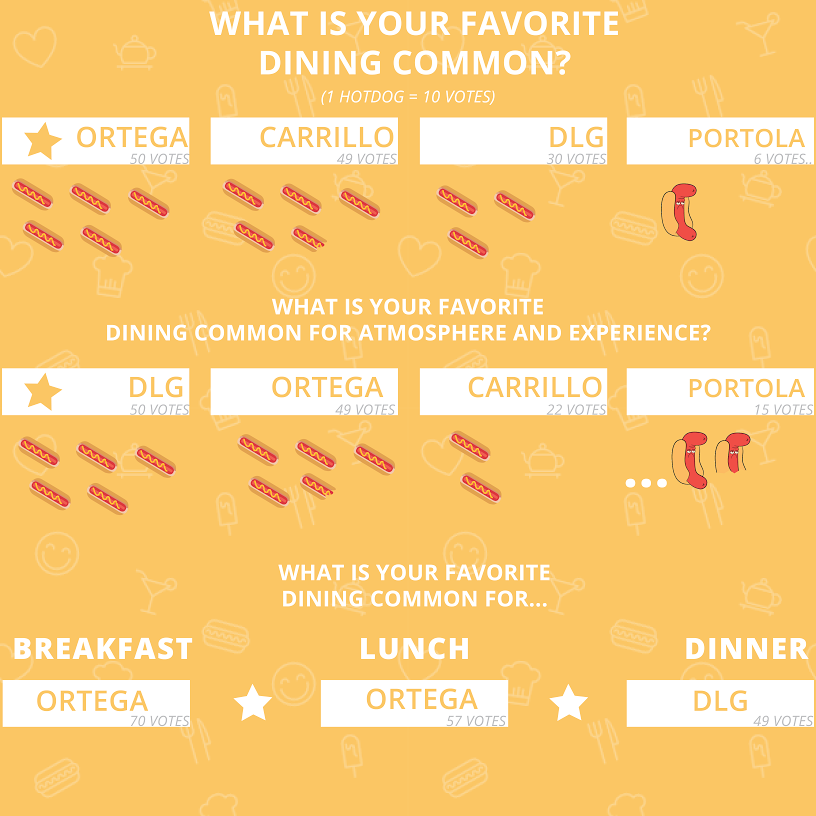 What is your favorite dining common for atmosphere and experience?

Unlike the overall favorite category, which saw DLG in third as the favorite dining common, it ranked first for atmosphere and convenience with just one percent over Ortega. Many agree that DLG is the most aesthetically pleasing dining common. The high-ceilings, sleek silver and wood furnishings, modern embellishments and twinkle-lit outside seating give DLG an edge over the other dining commons. Carrillo came in third with 16 percent and, sadly, Portola ranked last again with 11 percent of votes.

Portola likely suffered due to its awkward layout and location about one mile off campus. Ortega and DLG are more conveniently located for freshmen living in the Chi-Five, and Carrillo is only a short walk, bike ride or skate away from freshmen and readily available for residents living in San Rafael, Manzanita Village or Isla Vista.

What is your favorite dining common for breakfast?

Since Ortega is the only option for breakfast for freshmen living in the Chi-Five during the week, this dining common came in as the favorite. However, I would defend Carrillo as another crowd favorite since it offers customizable fried eggs and a better variety of fruits. Carrillo also tends to have thicker oatmeal while Ortega has more watery oatmeal.

What is your favorite dining common for lunch?

Yet again, Ortega ranked first as the favorite dining common for lunch. Sarah Crawford, a freshman resident living in San Nicolas, exclaimed, “I really like Ortega’s sandwiches to order because they’re exactly what you want!” Ortega also offers take-out and sack lunches for students with busy schedules or who just prefer to eat in the dorm. Then again, it’s no surprise that Carrillo garnered 28 votes. According to Samantha Stopol, Carrillo has “the biggest salad selection, and you can create your own sandwich. Their Asian food is a healthier and more delicious option. Plus, they have a gluten-free pantry! And everyone that works there is really nice!”

What is your favorite dining common for dinner?

There was only a two-vote difference between De La Guerra, Ortega and Carrillo as favorite for dinner. All of the dining commons offer a variety of choices, but some specialize in certain food genres. DLG offers Mexican and Asian cuisine while Carrillo has Italian and Asian styles. Ortega often has speciality bars that include sundaes, nachos, tacos and waffles.