Tomorrow is without a doubt the most joyous holiday on the Jewish Calendar, Purim. It’s an age old tale that the Jewish nation has survived many enemies wishing to destroy it, and Purim celebrates one of these survivals said to have occurred over 2000 years ago.

Traditionally, Jews tell the story of a Jewish girl who changed her name to Esther to hide her identity. King Ahasuerus of the Persian Empire fell in love with her, and she became Queen. During this time, the King’s prime minister, Haman, convinced the King to order a decree to destroy the Jewish nation. Esther fasted and prayed for three days and then revealed her Jewish identity to the King. He was inevitably pissed that his prime minister tried to kill his wife, so he hung Haman and saved the Jewish people.

Now that you know the story behind the holiday, I’ll tell you how we celebrate the survival of our people. We eat and we drink!

On this day, it is actually commanded that we drink — well kind of. It’s commanded to break out of your inhibitions and habits on Purim, and the way we do that is by drinking and toasting “to life”, a lot. It’s all in good spirit, so if drinking turns you into a terrible person rather than just a silly one, I’d stay away from the punch.

Another tradition during Purim is to give your friends and family special Purim baskets filled with food and gifts. Purim is one of my favorite holidays because every year I go to my grandma’s house to make Hamantashen, which are triangular-shaped cookies with a sweet filling. I don’t know why we only eat these bad boys once a year, because they are scrumptious enough to eat more often.

I get thrown into a nostalgic state every time I eat a Hamantashen. They make me think of the times I was dressed as a princess and had to stand on a chair to help my grandma roll out the dough. They also remind me of getting easily distracted and singing into my rolling pin instead of using it for its actual purpose. With my grandma’s endless patience, we would make dozens of Hamantashen to give to friends and family.

To shamelessly brag, our Hamantashen were always extra light, fluffy and perfectly glistening when they came out of the oven. They are really perfect for any occasion. Below is the recipe that we’ve used every year which comes from Spice and Spirit: The Complete Kosher Jewish Cookbook, by Tzuvia Emmer and Tzipora Reitman. It supposedly yields 4 dozen cookies but we make ours extra large so we always end up with fewer. 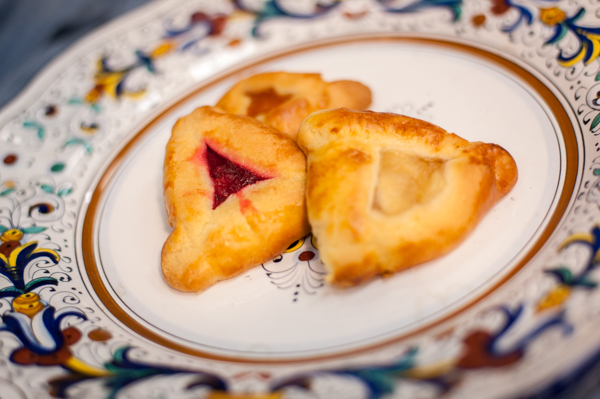 In honor of the tradition, I hope that everyone has a festive Thirsty Thursday filled with good food and great times! Finals are coming up, so use this as an excuse to have some fun before dead week approaches.

Congratulation on this highly meaningful and “feel good” article.