The Daily Nexus
On the Menu
Giovanni’s Booze and Brunch
February 23, 2015 at 5:00 am by Marisa Ratchford 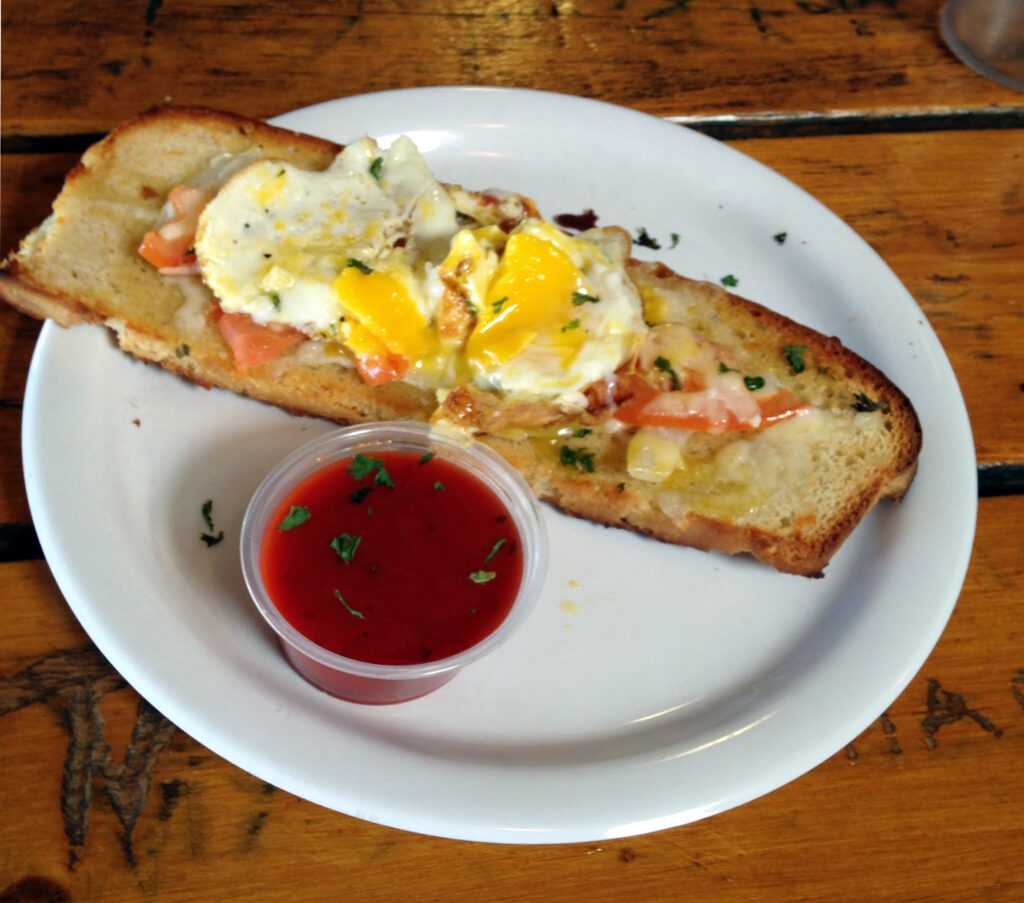 After working for two years as a waitress at a country club and spending every Sunday serving breakfast, I felt I had seen it all when it came to brunch — I even considered myself somewhat of a professional on the morning meal. So when provided the opportunity to try Giovanni’s new breakfast menu, I was eager to try this combination of my two favorite food categories: breakfast and Italian. It seems like such a daunting task, but after trying Gio’s take on this combination, I can say they have accomplished something unique and fresh in Isla Vista.

According to the owner Matt Metzka, Gio’s began serving breakfast “to try something new and have people be able to come in during the day.” The breakfast adds some diversity to a menu mainly focused on American-Italian cuisine. The menu is simple: three items that can be customized with different toppings, much like a pizza. You can choose between the breakfast scramble (the owner’s personal favorite), the breakfast pizza or loaded bread served on Gio’s classic homemade garlic bread.

As per Metzka’s recommendation, I tried the breakfast scramble. Since I am vegetarian, I replaced the meat with jalapeños because I like a little kick with my eggs. Gio’s creates the dish using pizza toppings such as green bell peppers, mushrooms, onions and olives, all scrambled up with eggs and then topped with mozzarella cheese and served with a side of marinara sauce. The first bite indicated that the veggies were crisp and fresh (much like they would be on a pizza) and were a good complement to the soft eggs. The mozzarella cheese was ooey and gooey just the way a melted cheese should be: satisfaction guaranteed! But it was the marinara sauce that really made this dish special. Unique to the Italian influence of the pizza place, the marinara added a zest to the dish that really tied it all together. Normally I do not like sauce on my eggs, but with this dish I could not get enough. In fact, I wish my portion of the sauce was bigger because it was that good. Overall it was a great dish for a cheap cost, had a good portion size and delicious flavors and textures. It would be perfect for that all too familiar I.V. Sunday hangover.

At Metza’s insistence, I also tasted the loaded bread, something that I was quite intrigued by. It was served open-faced on two slices of garlic bread and topped with mozzarella cheese, onions, tomatoes, Canadian bacon (which I left off) and topped with two sunny side up eggs. (And again served with the tasty marinara sauce on the side.) Now this sandwich — talk about an explosion of flavors! The tomatoes, which sometimes can be too mushy, were so fresh. The cheese held everything together, making it easy to enjoy and the yolk broke open and encompassed the meal in its delicious yellow membrane, soaking into the bread and creating something truly special. The garlic was a surprising but welcome twist because it provided a huge punch of flavor with all its additional seasonings. Even coated in cheese and yolk, the bread still had an audible crunch, which in my opinion is key to a good toast. Again the marinara sauce was delicious paired with the breakfast dish. Who would have guessed? The delicious food is not the only special offer of Giovanni’s brunch menu. For just $12.99 all day, folks 21 and over can purchase a bottle of champagne and a generously large cup of orange juice for make-your-own mimosas. The Champagne Sunday may roll over to Mimosa Mondays, but not at the excellent deal of four dollars off of a bottle.

Giovanni’s Booze and Brunch is just taking off, but with their reasonable prices and great flavors, Gio’s is a definite destination for weekend warriors searching for that perfect bite to eat to cure all ailments. Breakfast costs between $5.50 and $10 and is served from 10 a.m. to 2 p.m. on Sundays.