The Daily Nexus
Sports
Softball Travels to Cathedral City for Collegiate Classic
February 19, 2015 at 5:03 am by Martin Cobos 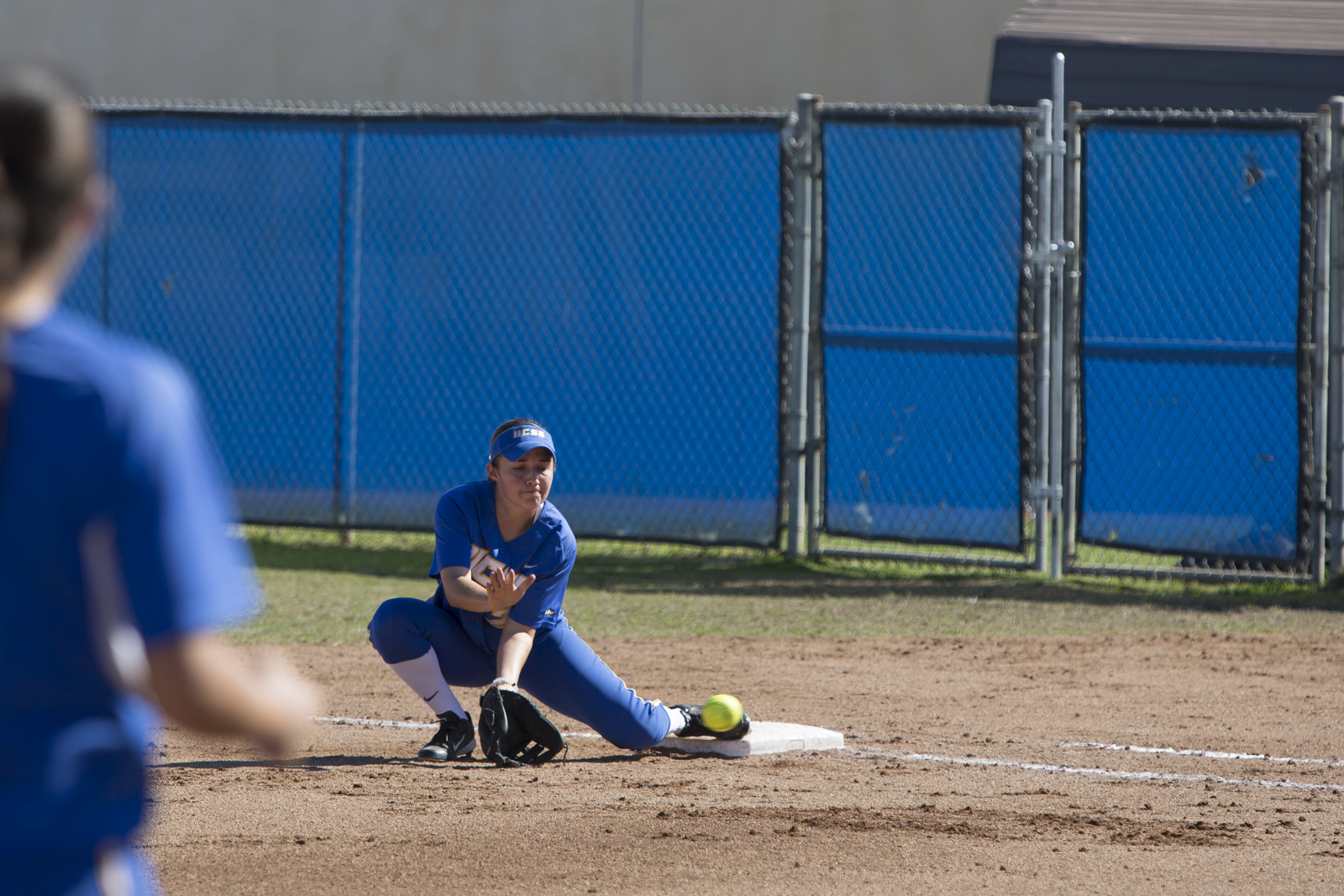 Arianna Palomares makes an out at first base. (Dustin Harris/Daily Nexus)

The UCSB women’s softball team will travel to Cathedral City, California this weekend as it gets set to compete in the Mary Nutter Collegiate Classic. The Gauchos will face BYU today, Utah tomorrow, Texas A&M on Saturday and both UNLV and Loyola Marymount on Sunday.

“We need to be more focused in our games and make sure we always have high energy,” senior utility Shelby Wisdom said. “I think this four-day tournament will help us because having one game can kind of get us going.”

The Gauchos continue to see solid production from their bats. Averaging four runs per contest with an on-base percentage of .362, the team has been very consistent at the plate.

Junior infielder Arianna Palomares leads the team with 11 hits in just 32 at-bats and has also been responsible for driving in six runs. She is trailed closely by sophomore outfielder Kristen Clark, who has 10 hits, and senior Jenessa Jeppesen, who has nine hits and sports a .333 batting average.

Five Gauchos have on-base percentages of .400 or above and four players hold a batting average above .300. The team also has three home runs to its credit this season.

While the Gaucho bats continue to roll, pitching has been a weak point for UCSB. The team has a total ERA of 5.33 and has given up 92 total hits to opponents this season.

Opponents have outscored the Gauchos 79-40 this season and opposing batters are averaging .311 with a .449 slugging percentage. In addition, UCSB has racked up 25 errors in just 10 games.

“We are really focusing on our goals and the things we need to work on,” Wisdom said. “We have a young team and are not necessarily focused on any game in particular, but just worrying about fixing our play.”

The Gauchos must be very sound this weekend as they face some tough opposition. BYU bounced back from a tough Kajikawa Classic to go 4-1 in the Wilson/DeMarini Desert Classic last weekend. In its four wins, BYU outscored opponents 25-10.

Utah also looks to stay hot as it went 5-1 in last weekend’s UNLV Wilson/DeMarini Classic. Senior outfielder Kate Dickman leads the offensive charge for Utah, batting .471 with 16 hits and a home run to her credit this season.

Texas A&M almost swept the Aggie Classic last weekend going 4-1 after losing to Penn State in extra innings. Senior pitcher Rachel Fox has been an ace on the mound with an ERA of just 1.56 including an impressive 28 strikeouts in just 36 innings pitched.

UNLV is coming off a 2-2 weekend as it competed in the Wilson/DeMarini Desert Classic. The team is very susceptible to giving up runs as it allowed 23 last weekend including a 10-2 loss against Utah.

Loyola Marymount has been struggling going just 1-4 in the University of Arizona Hillenbrand Invitational last weekend. The team is hitting only .239 this season and has been outscored 29-44 by opponents.

UCSB will face BYU today at 1 p.m. to open the Classic, followed by tomorrow’s game with Utah which will start at 3:30 p.m. Saturday and Sunday will see early matchups with Texas A&M and UNLV at 9:30 and 9:00 a.m., respectively, before the Gauchos close out the weekend with a 2 p.m. game against LMU.

A version of this article appeared on page 13 of February 19, 2015’s print edition of the Daily Nexus.