The Daily Nexus
On the Menu
Say Bonjour to The Kabakery
February 12, 2015 at 5:01 am by Allison Wright 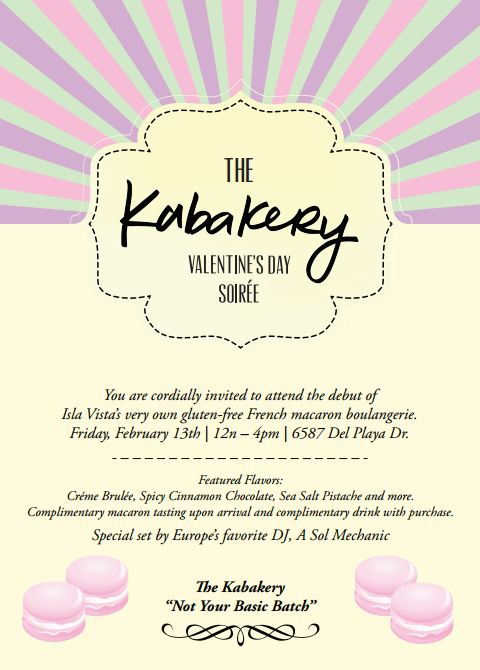 Wearing a screen-printed muscle tank, black, snakeskin-printed leggings and heart-shaped hoops, Betsy Kabaker looks like a lot of girls on campus. But don’t let her appearance fool you. She may not have a slicked back bun, pantyhose and a lint-free skirt suit, but Betsy means business. Her dreams may not include literal waves of delicate pink and violet pastries filled with mousse, but the fourth-year global studies major certainly sees macarons circling her future.

Betsy has already sold her macarons to local businesses including Coffee Collaborative. Waka Flocka Flame got a taste of her baked goods when he performed at Earl Warren Showgrounds in November. But this coming Friday may be her biggest milestone yet. Betsy will launch her first independent pop-up macaron shop with a free tasting accompanied by a DJ set. But before getting too far ahead of the present, On The Menu met with the budding entrepreneur to discuss Paris, New Venture and, of course, macarons.

Allison Wright: What got you into macarons in the first place?
Betsy Kabaker: In Paris, I worked for this jewelry designer, Analise Michelson, and she was doing a show for Fashion Week. She was working me to the bone, which is usual in fashion, and I left to take a break and went down the street to Pierre Herme, which is like the top macaron place in Paris. It’s even higher quality than Ladurée. I’d never had one until that day. It saved me from falling apart … I think I had five of them in a span of five minutes.

A: What’s your origin story as a baker?
B: When I was growing up, all these kids had these hobbies and talents where they could tap dance or sing at a talent show. I never really felt like I had that. I’d go home and cry over an apple pie that I’d make, and it never occurred to me that that was my talent until I came to college and started sharing it with people.

A: What are some of the ins and outs of starting a pastry business in Isla Vista?
B: First of all, you’re catering to a demographic — in I.V. at least — that doesn’t want to pay for anything (let alone cares necessarily what a macaron is). They don’t even know really what goes into making a macaron. A lot of my friends are like, ‘Isn’t it just a cookie?’ and I’m like, ‘You don’t understand!’ I’ve been perfecting this recipe since September.

A: So you mentioned your first macaron experience; what led you to start selling them?
B: I was floored, first of all, by the level of pastry [in France]. On every corner, you could get the best pastry that you’d ever had — even in the train stations. No matter where you went, it was incomparable to anything that they have [in the U.S.] Pastry chefs in the U.S. get paid 23 grand a year. I can’t do that. That’s not my lifestyle. I was looking at all these people that are living off [that], they’re living in Paris, and the president of the country gives medals to the top pastry chef. That’s where I want to be. I want to elevate myself to that, to be next level.

A: How did you get involved with the Technology Management Program?
B: I came back to America and it was really hard for me. I was interning for BCBG, but I needed something else. One night, I think I made like 200, and I was sitting there with all these [peanut butter and jelly] macarons … I put little labels on them saying ‘The Kabakery,’ which has been a long-standing joke my whole life. So I went to the Starbucks down the street, got a drink, sat outside and as people walked by, offered them a macaron.
Two weeks later I came back to Santa Barbara … The first thing I did was sign up for a TMP class. I used the Kabakery as my project for it. This would have stopped the second I got to school unless I had this class pushing me along the way and showing me what I’m supposed to do. At the same time, it was nice because I was still doing everything that I was doing organically, but I had people that were filling in the gaps. 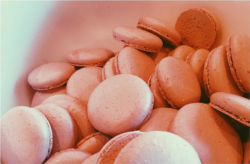 A: Where do you see The Kabakery in the future?
B: My concept for this is that it will be a designer dessert ecommerce website. People can just sit at home, sit in class (you know how all these girls are in class online shopping for sweatpants or whatever they do, I want them to do that, but with dessert … I don’t want them to be thinking about the calories. I want them to think, ‘This is a nice gift for myself.’)
I’m trying to market this the way fashion designers market themselves … to base this brand in terms of flavor collections. There’s one, ‘Drake and Bake,’ that’s based on Drake the rapper, which is champagne, rose and gold chain, those kinds of flavors.

A: Are macarons the new cupcake?
B: Yes. They already are the new cupcake. I think things are slow to penetrate this Isla Vista market. Macarons are one of the top trending things on Instagram. They’re very visually appealing, and I think we live in an Instagrammable world. Once someone takes a picture of it, if it’s worth putting it on Instagram, you’re going to be fine … People wait around the block of Ladurée to get a macaron. I want that, here. I want that level of quality, aesthetics, taste to be what people actually get.

A: What are some of the struggles of making such a difficult pastry?
B: There are so many different factors and that’s what I want people to know. It’s not just something that you can whip up. You really have to pay attention to the details — you’re basically doing a science experiment. It’s more than just a cookie.