The Daily Nexus
Sports
Women’s Basketball Falls to Cal Poly at Home
January 12, 2015 at 5:00 am by Sean White 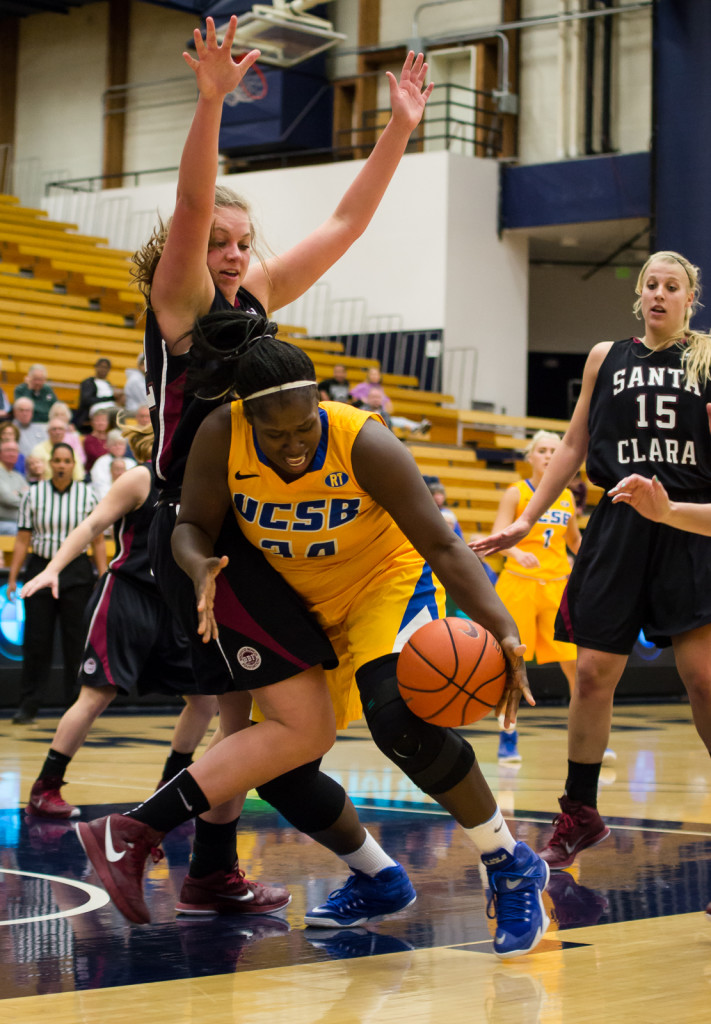 Forward Mi’Chael Wright drives through the Santa Clara defense during the UCSB-Santa Clara matchup on Thursday. The Gauchos lost 47-33 to the Broncos. Cameryn Brock/Daily Nexus

The Blue-Green rivalry hosted by the UCSB women’s basketball team on Saturday resulted in a win for Cal Poly as it beat UCSB 56-41 in the home team’s Big West opener.

The Gauchos remain winless and are now 0-14 overall with a 0-1 conference record, while the Mustangs are 7-7 overall and have earned their second conference win of the season.

UCSB was unable to establish a true paint presence as senior center Clair Watkins missed her second game of the season due to an undisclosed reason. Cal Poly’s size advantage allowed them to outrebound Santa Barbara 42-29, along with outscoring them 14-8 in the paint.

Despite not being able to establish an offensive presence in the paint, shots just weren’t falling for Santa Barbara. The Mustangs’ zone defense limited various offensive opportunities for the Gauchos as they shot 28.6 percent from the field and 15 percent from behind the three-point line.

“Tonight we were just really stagnant,” Head Coach Carlene Mitchell said. “Other guards have to step up and be willing to get in the gaps and either knock down mid-range jumpers or open it up for other players.”

UCSB was not able to contain Cal Poly’s offense as it ended the first half on a 24-9 run, giving the Mustangs a 30-15 lead at halftime. Although UCSB faced a double-digit deficit entering the second half, they played with great effort. The Gauchos scored 26 points and allowed 26 points in the second half as they traded buckets with the Mustangs early in the half.

Junior guard Jasmine Ware scored a game-high 15 points on 6-13 shooting from the field. UCSB managed to earn 10 steals off of Cal Poly’s 20 turnovers but were unable to capitalize on those opportunities.

“We had 10 steals but we didn’t turn those into a lot of second-chance points or transition points,” Mitchell added. “We need to turn those miscues by our opponents into points for us on the opposite end of the court.”

Although the Gauchos are 0-14, the beginning of conference play has somewhat given UCSB a new beginning to the season, in hopes of making it to the Big West Tournament.

The Gauchos will be on the road Thursday at Cal State Northridge for their second conference game in hopes of earning their first win of the season.