The Daily Nexus
Artsweek
Storytellers from The Moth Come to UCSB
November 14, 2014 at 1:07 pm by Kelsey Tang 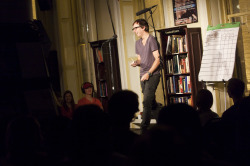 On the screen of the porch window was a ripped hole that drew in moths attracted to the shimmering light. While these moths fluttered about, a group of friends regularly gathered to share one another’s slice-of-life stories. In an attempt to simulate these balmy summer evenings by collecting the most riveting anecdotes, The Moth was created.

The Moth is a renowned nonprofit organization committed to celebrating the “art and craft of storytelling.” Since 1997, the establishment has travelled across the nation to present stories that display a grand spectrum of individual human experiences. Their success has expanded to include a number of programs — The Moth Mainstage, The Moth StorySLAMs and The Moth Radio Hour to name a few.

Our campus was blessed with their presence the evening of Nov. 5 in Campbell Hall. Any resemblance to a dismal lecture hall instantly dissolved as the lights dimmed and the spotlight imbued the stage with a warm glow. Because The Moth typically attracts an older audience, the sight of thinning gray hairs and thick-lensed glasses was common. And the performance certainly felt reminiscent of a wise, old relative retelling their adolescent memories ending with an insightful bit.

The theme of the night’s program, “Fish Out of Water,” required the five featured speakers to share a story in which they felt misplaced in a usually familiar environment.

Comedian, actor and writer Taylor Negron also graced the stage with his booming presence. He began his story illustrating characteristics of the aesthetic “Californian Gothic” and his exaggerated phobia of hippies, having grown up in the era of Charles Manson. Negron’s story encompassed all that is inexplicable, but wildly absorbing, including the appearance of Jim Morrison on acid and a circus monkey casually juggling. The comedian used the word “glee” to describe a bizarre night that took place in his home at the tender age of 12.

The evening’s lineup also included Eileen Cronin, a successful author with a condition that leaves her legs ending at the knees; Les Kurkendaal, an actor and comedian struggling with his mother’s gradual descent into dementia and Richard A. Matthew, a university professor and humanitarian attempting to explain the “imperfect” importance of travelling to war zones to his concerned five-year-old son.

It’s important to note the intimate setting Campbell Hall suddenly evoked. No longer did the looming auditorium feel cold and big. The audience shared strident laughs and silent moments of sympathy, making the room feel like that same summery porch where the idea of The Moth was born. As the group of speakers spilled their vulnerabilities into a dusty spotlight, the audience sat intrigued and mesmerized, resembling those same moths hovering about the crack of light through the torn window screen.

For more information on The Moth or to hear some stories, go to themoth.org/about/programs/the-moth-podcast.