The Daily Nexus
Sports
Gauchos Prepare for Fullerton In Final Home Game of Season
October 30, 2014 at 5:00 am by Martin Cobos 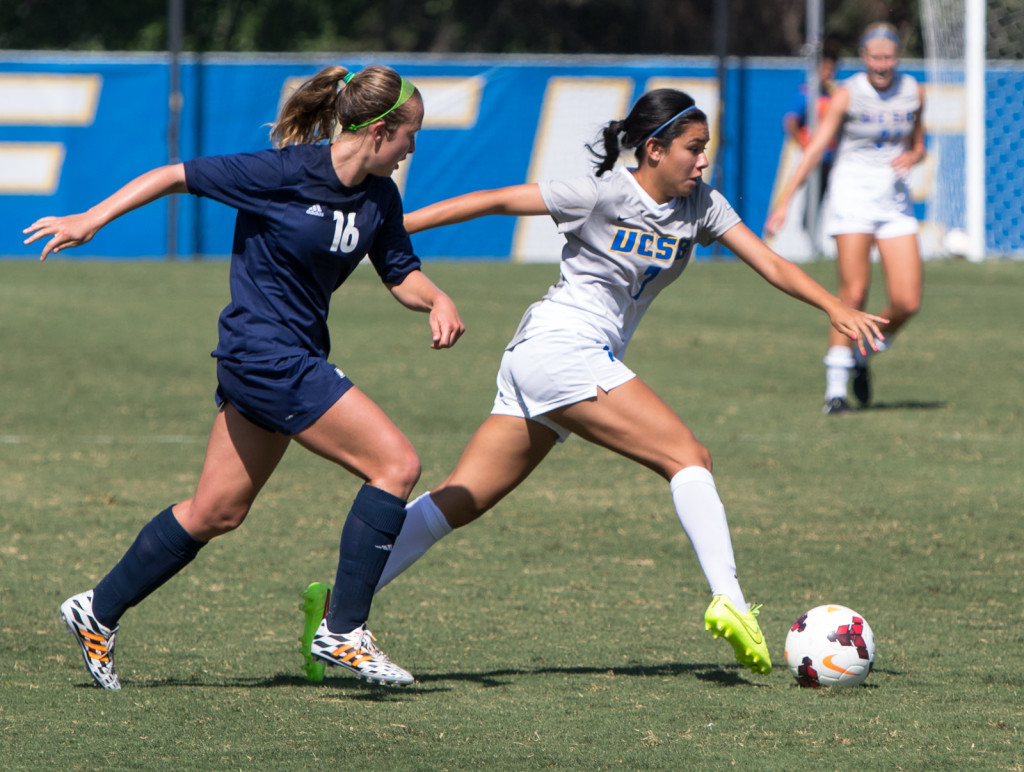 The UCSB women’s soccer team will suit up for the last time today as it faces Cal State Fullerton in its final conference game of the season at home.

“We’re disappointed like crazy that we’re not going to advance beyond Thursday,” Head Coach Paul Stumpf said. “However, I couldn’t be happier for the group of young ladies that have played this year.”

Thursday will be Senior Night, as the graduating seniors will be saluted in the pre-game ceremonies. Midfielder Kelly McGrath, midfield/forward Madison Beckley, midfielder Geneve Dromensk, midfielder Miranda Cornejo and midfield/forward Indiana Mead will all come out of the tunnel one final time in their Gaucho career.

UCSB will have to cope without Indiana Mead in this match however, as she suffered an injury in the previous game against Cal Poly. The Gauchos may also be without Miranda Cornejo as she has yet to be cleared to play following an injury sustained three weeks ago against Hawaii.

With Mead inactive, junior midfield/forward Angelisa Cortez and sophomore center midfielder Sara Feder must step up if the team hopes to earn this final victory. Cortez and Feder lead the Gauchos with five goals each and have combined for a total of five assists.

UCSB’s defenders must also continue to pick up the slack, as Cornejo’s absence from the lineup has been noticeable. Sophomore defender Sydney Fuertes and junior defender/forward Savannah Francis have done a fantastic job keeping the Gauchos in games this year with their strong defensive play.

“We want to honor our seniors and end the year on a positive note,” Fuertes said. “We fell short of our goal considering we wanted to end up in the top four of our conference, but we will only improve with time and experience.”

Junior goalkeeper Beth Ritter has also been crucial in keeping scores close. Ritter has five shutouts to her credit this season and has made a total of 47 saves.

“I think the key to victory in this game for us will be passion,” Ritter said. “We have had a couple of close losses and some of the scores haven’t gone the way they should’ve, but we really want to send our seniors out with a bang.”

Cal State Fullerton will be trying to stop the Gauchos by way of their very strong defense. Sophomore goalkeeper Jennifer Stuart is posting a goal against average of just 0.70 and has a save percentage of .795. Stuart also has three shutouts to her credit this season, which ties Ritter.

On the offensive side of the ball, junior forward Rebecca Wilson leads Fullerton’s attack with 10 goals and one assist to her credit this season. The impressive total has tied her for sixth in the school’s single season history.

The Gauchos will take on Cal State Fullerton today at 7 p.m. at Harder Stadium.

A version of this article appeared on page 13 of October 30, 2014’s print edition of the Daily Nexus.