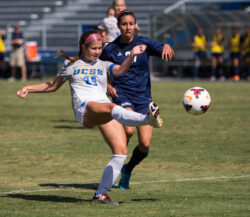 With just two games remaining on the season and out of the playoff picture, Santa Barbara faces a must-win situation against rival Cal Poly. Dustin Harris/Daily Nexus

The UCSB women’s soccer team must travel into hostile territory this Sunday as the squad gets set to face Cal Poly in its last road game of the regular season.

“We have been thinking and talking a lot about this game,” Head Coach Paul Stumpf said. “We are basically in a playoff situation now because if we lose another game then we will not finish in the top four and get into the conference tournament.”

Achieving that win and keeping their conference hopes alive will not be easy for the Gauchos. Cal Poly is riding a three-game win streak and the team is currently tied for the number one spot in the Big West with 12 points.

However, Cal Poly has been vulnerable at home. The Mustangs post a 1-2 record in conference home games, including a shut out loss to UC Davis. Junior goalkeeper Alyssa Giannetti is also allowing an average of 1.31 goals per contest and Cal Poly has only three shutouts to their credit on the season.

The Gauchos hot offense will look to take full advantage of Cal Poly’s less than stellar defensive statistics. Thirteen players have scored at least one goal this season and UCSB is posting a .136 shot percentage; both numbers lead the Big West.

Junior midfield/forward Angelisa Cortez and sophomore center midfielder Sara Feder have led the attack for the Gauchos as they each have five goals on the season. Feder has been nothing short of magnificent of late, notching one goal and two assists in last weekend’s conference matchups.

The Gaucho forwards should get plenty of opportunity to attack as the team is changing up their system and switching to a more direct style of play.

On the other hand, the defense for the Gauchos have shown signs of weakness as they allowed more than two goals for the first time all season last Friday. UCSB is giving up an average of 1.12 goals per game and junior goalkeeper Beth Ritter’s save percentage has dropped to .703.

“We have been outshooting opponents for the most part, but we are still getting scored on,” Ritter said. “We can’t give the other team that 30 seconds to score.”

Defense will surely be the emphasis for the Gauchos this week as they must limit the opposing team’s opportunities to score, especially late in games. The Gauchos let a lead slip away with three minutes remaining on Friday and then allowed a game-winning goal in the final minute of play on Sunday.

Limiting Cal Poly’s offense is a tough task though, as the team has scored a total of 30 goals this season and average over 14 shots per match. Big West leading scorer Elise Krieghoff leads the Mustangs attack. The junior forward has an astounding 13 goals and three assist on the season.

“The key to victory will be to be a little more aggressive and courageous,” Stumpf said. “We are going to have to defend like crazy up there and we are encouraging our forwards to take chances.”

The Gauchos kick-off against Cal Poly Sunday at noon.

A version of this article appeared on page 13 of October 23, 2014’s print edition of the Daily Nexus.