The Daily Nexus
Sports
Santa Barbara Seeks to End Two-Game Scoreless Streak at Harder
October 9, 2014 at 5:00 am by Martin Cobos 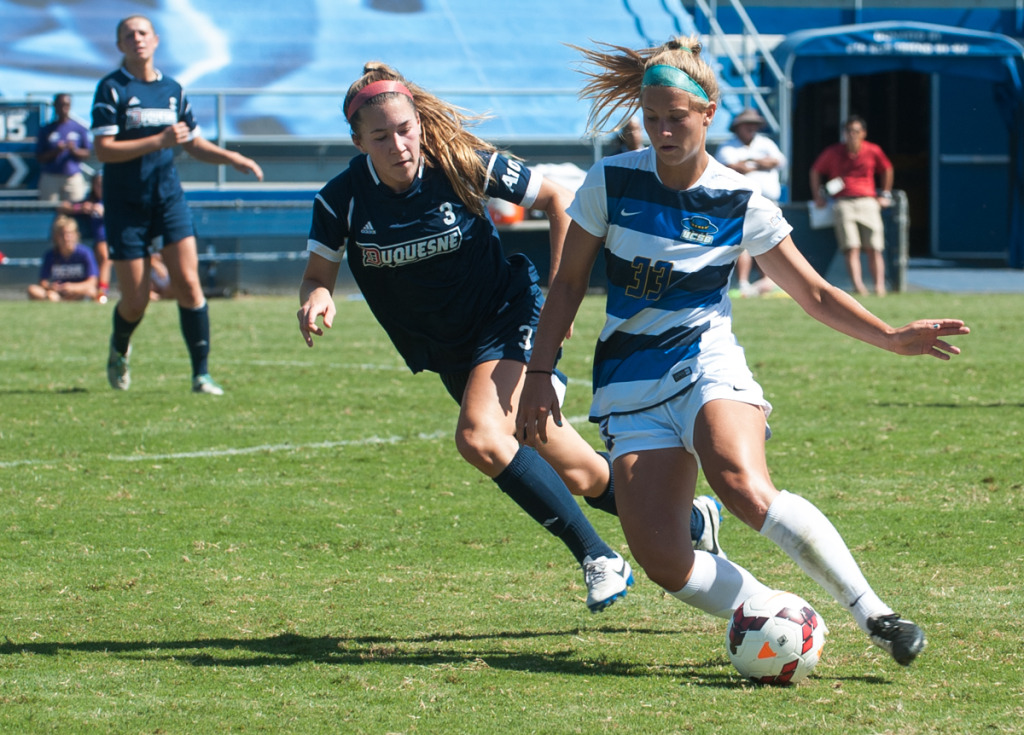 UCSB freshman Chace Schornstein battles for the ball in a recent match against Duquesne. The Gauchos look to snap a two-game losing streak when they play Hawaii and UC Davis over  the weekend. (Kenneth Song/Daily Nexus)

The UCSB women’s soccer team is looking to rebound after suffering consecutive shutout losses for the first time this season. This weekend, the Gauchos will play back-to-back home games as they face Hawaii on Friday and UC Davis on Sunday.

“The losses were tough because we played very well,” Head Coach Paul Stumpf said. “We are still very confident in the team that we put out on the field and we’re not pushing the panic button at all right now.”

While a 0-2 start to conference is not ideal, the Gauchos still have plenty to feel good about. The team has been displaying a dominant advantage in possession and junior goalkeeper Beth Ritter has only allowed 12 goals this season.

“We know that we are right there and we can beat these teams,” Ritter said. “We’re going to play tighter the entire 90 minutes and work on getting that final ball in.”

Another good sign for the Gauchos is that this weekend will mark the return of freshman forward Amanda Ball to the lineup. Ball notched two goals in the first two games of the season before being hampered by injury.

“Amanda Ball is a top freshman,” Stumpf said. “We get her back this week and she will bring a lot to the table for our forward lines.”

Against Hawaii, UCSB will need to be in top form if they look to win. Hawaii comes in averaging 2.08 goals scored per game and is led by sophomore midfielder Storm Kenui who has five goals and two assists on the season.

Hawaii thrives on scoring quickly as 16 of their 25 goals have come in the first half of play. They are vulnerable on defense, however, as they are allowing opponents an average of 2.67 goals scored per game.

Following Friday’s match, Santa Barbara must acclimate to an entirely different style of play when they face UC Davis on Sunday. The Aggies’ system centers around tough defense and stellar play from senior goalkeeper Taylor Jern.

Jern has a GAA of .087, having only allowed 12 goals on the season. In addition, she has 43 saves to her credit and an outstanding save percentage of .782.

Yet UC Davis simply lacks the offense needed to win games. They have only scored five goals this season and have a dismal shot percentage mark of .040.

UCSB will host Hawaii this Friday at 7 p.m. followed by UC Davis on Sunday at 1 p.m.

A version of this article appeared on page 13 of October 9, 2014’s print edition of the Daily Nexus.