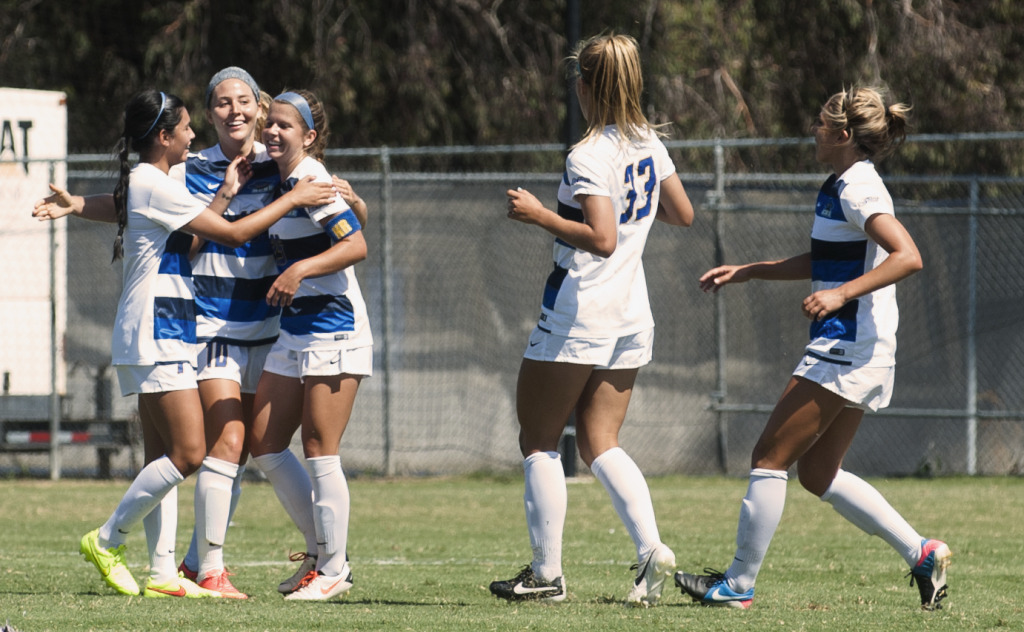 UCSB’s squad celebrates the first of their four goals against Duquesne on a balmy Sunday afternoon. The Gauchos, who have now won five matches in a row, will open Big West play against CSU Northridge on Friday. Photo by Kenneth Song/Daily Nexus

The UCSB women’s soccer team will open conference play this weekend as it faces Cal State Northridge on Friday followed by Long Beach State on Sunday.

After a dominant 4-0 victory over Duquesne last weekend, the Gauchos have now won four consecutive games and have improved their overall record to 6-3-2. Cal State Northridge comes into the weekend with a 3-7-1 record while Long Beach State enters at 4-4-3 overall.

“Having a winning record is great,” Head Coach Paul Stumpf said. “We have let a couple wins slip away from us this season, but our play has been mostly good.”

The Gauchos have left nothing to chance recently, as they have outscored their opponent by an outstanding margin of 14-1 in their last four games. This offensive outburst has helped to increase their goals per game to two this season.

“I think we have been creating more chances in the final third,” Mead said. “This has given us more opportunities to score and we have done just that.”

On the defensive side for the Gauchos, junior goalkeeper Beth Ritter should be ready to start this weekend after having sat out the previous game against Duquesne. Ritter is posting a GAA of only 0.76, which is the lowest in school history.

“We have worked really hard in practice, and our confidence level is pretty high right now,” Ritter said. “Although I try not to get too comfortable, it definitely takes a little pressure off when the offense scores so many goals.”

While the Gauchos seem to be firing on all cylinders, Cal State Northridge has continued to struggle. Losers of their past two games, the Matadors have scored only eight goals in 11 games and give up an average of 1.16 goals per contest.

Piloted by senior defender Leandra Walker, who leads the team with two goals on the season, the Matadors will need to create more opportunities if they look to keep up with the Gauchos blistering offense.

Long Beach State should prove to be the tougher of the two opponents this weekend. Freshman striker Ashley Gonzales has recorded an impressive five goals and two assists this season, as the 49ers average 1.09 goals scored per match.

UCSB will kick off against Cal State Northridge on Friday at Harder Stadium at 7 p.m. before heading to Long Beach State for their match on Sunday at 6 p.m.

A version of this article appeared on page 6 of October 2, 2014’s print edition of the Daily Nexus.