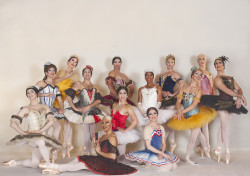 The decked-out dancers from the world-renowned, all-male Les Ballets Trockadero de Monte Carlo dance company returned to Santa Barbara this past Tuesday for a sold out show at the Granada Theatre. Audiences were thrilled by their subversive and unique takes on ballet and incredible, legitimate skill. The evening’s repertoire was inspired by Pyotr Ilyich Tchaikovsky’s Swan Lake, Don Quixote and other classic ballets.

The group began in 1974 and has since become legendary for its all-male cast and humorous takes on classic ballets featuring men en pointe and in drag. The event’s principle sponsor, the Towbes Fund for the Performing Arts, helped choose to bring the Trocks to Santa Barbara for what would be their first performance since 1998. They chose wisely: The show sold out, attracting hundreds of community members of all ages and many UCSB students.

After a hilarious introduction in a thick Russian accent prepared us for the program we were about to see (a medley of Swan Lake, Don Quixote and more, starring the likes of “Maya Thickenthighya,” “Helen Highwaters” and “Nadia Doumiafeyva”), the houselights dimmed and the Granada curtains, beautifully illuminated in red and gold, parted to show the backdrop: the looming castle of Baron von Rothbart, the villainous wizard who turns the lake’s swans into alluring women, but only from sunrise to sunset.

From the start, we get the sense that this is a self-aware performance. To start, the Baron, wild-haired and red-caped, storms around the stage menacingly until he gets trapped running in circles and stops center-stage, panting with exhaustion. Even the painted backdrop is a parody of what a stage setting should be: A dark and gloomy lake scene, a cliché that is done so well it becomes campy.
This is the key to success in much of the Trocks’ performance. To quote The Telegraph, “The extraordinary skill of the Trocks proves that to undo ballet, one must be able to do ballet.”

Beneath the humor and slight shock factor of seeing a muscular man in eyeliner, lipstick, a white tutu and feather headdress take the stage in and transform into a Swan — her hairy bosom swelling at the sight of the equally made up Prince Siegfried — there is true beauty and skill. The dancers glided and spun across the stage with an effortlessness that commanded attention and respect. In short, whether in drag or not, these men were as impressive as any ballerinas I have ever seen.

Alongside the clear skill, there was a commitment to the performance (of gender, as well as of the specific characters) by all dancers. Without this total commitment, the show would not have been nearly as compelling or funny, as so much of the humor came, not from the drag, but from the performers’ ability to totally embody a character and then break it in sudden, unexpected ways.

These moments, often on the side of the main action — an attending ballerina falling on her butt, the Swan sobbing audibly before being reminded to smile for the audience, the use of contemporary and universal hand gestures, the Prince’s young friend snapping a selfie with his corpse as the curtain was falling, the abrupt Riverdance parody during their standing ovation — are the reason that the Trocks’ performances transcend “drag for drag’s sake.”

Truly funny and pleasing to the eye, Les Ballet Trockadero’s carefully constructed performances can be appreciated by a wide audience. I found that they appealed to a huge part of the spectrum in terms of age, knowledge of ballet and knowledge and concern with LGBTQ issues.

The wonderful thing about their killer combination of humor and elegance, camp and edge, tradition and surprise, is that — as with the best works of art — their performance has an easy, glossy sheen to it that draws people in. It’s only when you get up close that you notice the false eyelashes and blonde wigs tied into tight ballet buns.

I hope that in addition to having fun and finding laughter in the serious, high-minded world of ballet, viewers left the Granada after the final curtain set on this clever act of subversion and discovered that they had something more to think about.

A version of this story appeared on page 8 in Thursday, April 10, 2014’s print edition of the Daily Nexus.