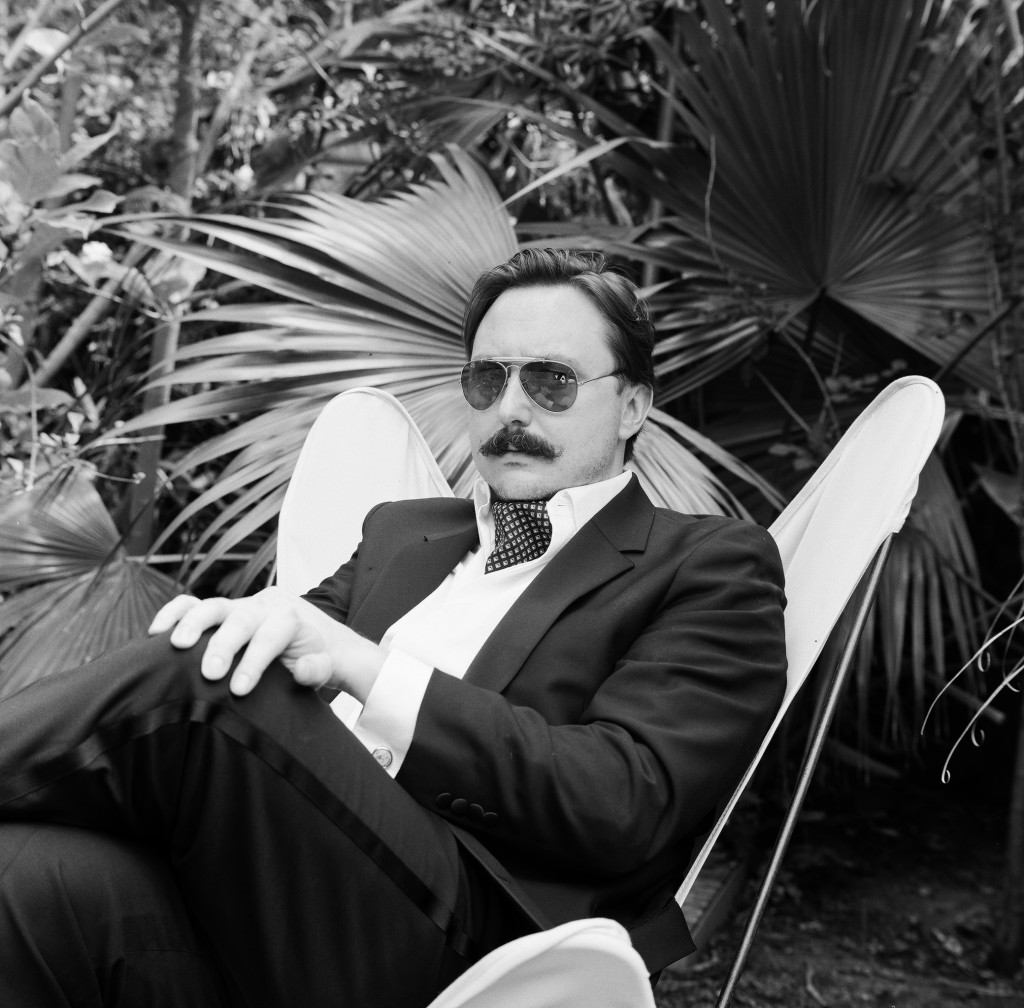 I think I like John Hodgman most when he’s being absurd.

I can see it now: Mustachioed, forty-two years old, John Hodgman wears a purple dress and sings a song, while playing ukulele, while impersonating Ayn Rand.

Yeah. That will do it.

“I Stole Your Dad” is a sort of one-man show wherein Hodgman mixes music, comedy and just a drizzle of “we’re all afraid to die and it’s okay.”

His entrance was astounding. To the sound of pumping dubstep, with the house lights still up, Hodgman ran out wearing a parka and sunglasses. He high-fived up and down the aisles, stopped to hug a guy, leapt back on stage and kicked over a chair triumphantly. To the sound of cheering and clapping, he continued to jump up and down to the beat, pumping his fist, gradually losing his breath. Finally the music ended and he bent over the mic, raggedly breathing for a long time.

After telling us some delightful factoids about Santa Barbara, Hodgman entered into the post-non-apocalypse portion of his monologue, discussing what it was like to wake up after the Mayan calendar had predicted the world would end and why he was okay with it ending: Because dying in the apocalypse gives your life meaning. The meaninglessness and inevitability of getting older and less “relevant” and ultimately dying were the thematic strains that tied the show together.

Though his more rehearsed and monologue-like sections about these themes were relatable and peppered with pithy, memorable lines (“Why did I grow a mustache? … I no longer needed to be loved and I was ready to die,” and “Cats know how to hurt me the most.”), I found the looser, riskier moments of the show to be extremely engaging.

For example, after a story about marijuana early on in the show, Hodgman paused to ask if there were any children in the audience. The mother of the youngest attendee — Summerset, age 10 — piped up, prompting a conversation between comedian and child.

After a really wonderful section about Hodgman’s adolescence as a member of the “super-smart-afraid-of-conflict-narcissist-club” — in other words, “an only child” — and stories about conversations with his children masked as conversations with his cats, he invited Summerset onstage to help him vet a few jokes for cultural references that might be outdated.

The entire crowd erupted in laughter. It was this moment of “What the fuck did he just say?/Oh my god what is Summerset’s mom thinking?/Oh my god what is Summerset thinking?/What is he doing?/We are no longer safe, we are no longer safe,” that every audience kind of dreads and longs for at the same time, and it was definitely the highlight of the show.

The show got a bit more scripted and sentimental after that, just as many of us were perhaps wanting to be a bit more unsettled. However, I also appreciated the sentimentality, especially the vulnerability of playing the old bluegrass tune “Rocky Top” on ukulele as a wrap up to the show’s final story. He encouraged us to sing along with him, and you know what? Even though the setting was not particularly magical (the enormous Campbell Hall, three-quarters full, with its huge stage — a space difficult for any one body to hold), it felt kind of okay to be weird.

And this was before Hodgman stripped down to his socks and boxer-briefs and had an audience member “zip him up” into a purple dress to assume his Ayn Rand persona from Paul F. Tompkins’ “The Dead Authors Podcast.” Probably for my fifteen-year-old self who loved The Fountainhead shamelessly, and for my current self who still secretly does as long as CCS Literature teachers aren’t listening, this was my favorite part.

Though I’ve seen a lot of spectacular, awe-inspiring performances by professional speakers who have had just the perfect balance of confidence and “off-the-cuff”-ness, I don’t know that I’ve ever seen one that took guts like this.

As Ayn would say, he’s in the money.

A version of this story appeared on page 13 of Thursday, April 3, 2014’s print edition of the Daily Nexus.