Acclaimed spoken word poet Anis Mojgani will return to Santa Barbara for an intimate, free performance at 7:30 p.m. tonight at Granada Books on State Street. The event is brought to us by UCSB’s MultiCultural Center with support from Poets & Writers, Inc. and a grant from the James Irvine Foundation.

Mojgani is a heavy hitter of the spoken word community. He has performed on “Def Poetry Jam” alongside greats like Jill Scott and Beau Sia, published several books of poems and he was the two-time winner of the National Individual Poetry Slam in 2005 and 2006.

Several dozen lucky UCSB students were able to see Mojgani perform in the Hub last year during A.S. Program Board’s UCSB Poetry Showcase, where he performed after seven skilled student poets. Many of those poets cite Mojgani as one of their inspirations for getting into spoken word.

If you have not seen Mojgani perform, I highly recommend finding his work online. In particular, the three pieces filmed at the Seattle Grand Slam in 2006 — “Direct Order,” “Here am I” and “Shake the Dust” — made me an instant fan several years ago.

Getting to meet Mojgani last year and seeing him live (he’s only gotten better since taking home those slam champion titles) were some of the best experiences of my college career.

With a style imitated by many but completely mastered by only one, Anis Mojgani’s performance tonight will be a must-see event for the entire Santa Barbara community.

And I’m guessing a lot of people know that already so get there early and grab yourself a sturdy seat. You’re going to need it.

If you’ve been bitten by the spoken word bug or just want to hear some cool performances, the MCC will hold an open mic next Thursday at Biko (6612 Sueno Rd.) in I.V. Enjoy! 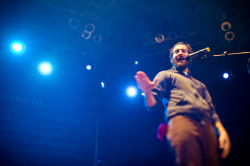 A version of this story appeared on page 8 of Thursday, February 13, 2014’s print edition of the Daily Nexus.