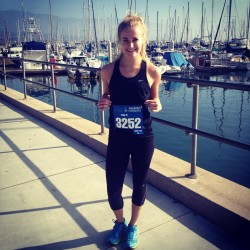 “At the eleventh mile, there was this long steep hill. Oh my god, my legs were barely moving. Then after the hill, I just started booking it.”

Second-year biology major Emily McGovern had never run a half marathon before. She had run plenty of 5 and 10Ks, but this was 13.1 miles — not 3.1 or 6.2 — and that hill, which took runners 170 feet closer to the sun, was not making the longest run of her life any easier.

This run happened to be the Santa Barbara International Marathon and Half Marathon taking place on Saturday, November 9. It turns out that McGovern was not the only running devotee to attend the event. A slew of other UCSB students spent their day running either the half or full marathon, and after a week of post-run recovery, the participants shared their experiences regarding training, or the lack thereof, for the event and what the event actually meant for them. 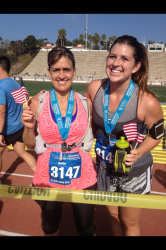 For fourth-year English major Brooke Lyon, Nov. 9’s challenge stood as her fourth time attending the event. Lyon took up running the summer before coming to UCSB and has run the Santa Barbara Half Marathon each year since. This was not, however, her fourth half-marathon ever run — it was her 11th this year alone.

It all started when Lyon and her mother made a New Year’s resolution to run 13 half marathons in 2013. “It’s 13 thirteens in 2013,” she explained, adding that their undertaking has proven to be a mother-daughter bonding opportunity.

Of all of the marathons she has run, Lyon claims that the Santa Barbara Marathon is one of her favorites.

“I really like the SB half marathon. The size is pretty ideal for me because I did the Nike Women’s Half Marathon, and that’s like 30,000 people and that’s nuts. The smaller ones, too, are really expensive because they’re only 20 to 30 people,” Lyon said. “Santa Barbara is nice because there’s only around 5,000 people total, so it’s a pretty comfortable amount. You still feel like it’s a big thing, but you don’t get clogged up in the course.”

Lyon’s one complaint about the course was the hill, the same one McGovern mentioned. “It’s just killer!” she said.

To prepare for her first half marathon, Lyon ran three to eight miles three to four times during the week and completed one long run every weekend, building up to a 12-mile run the weekend before the marathon.

“It’s cool to be able to see how much training you can really do,” Lyon said. “If you run every weekend you see so much improvement. You’re actually changing your body.”

As for McGovern, she typically runs five miles two or three times a week and was already in shape before she started training for the Santa Barbara event. Because of this, she did not begin full-on training until a few weeks before the marathon, at which point she added in long runs on weekends.

It worked, though, and according to McGovern, the feeling she got when she crossed the finish line of her first half marathon was a moment she will never forget.

“It was great,” she breathed. “I felt so relieved.”

As for the future, McGovern has made it her goal to run a full 26.2-mile marathon within a year.

“I want to ultimately run a full marathon and I’ve always liked running,” McGovern said. “I like to think, and I think a lot when I run.”

Meanwhile, while Lyon previously ran a full marathon last year, she decided to stick with half marathons because she believes they are easier to train for as a busy college student. “It’s just a huge commitment because the training runs you’re doing are taking three hours and you’re running 16 miles on a Wednesday and you have class,” Lyon said.

While McGovern and Lyon are both runners — with McGovern nailing down 10 to 15 miles a week and Lyon casually dubbing her under two-hour half marathon time an “easy morning run”— David Pascoe is not a runner. A literature major finishing up his last quarter, Pascoe simply “showed up” to the starting line of the full marathon.

What inspired him to run 26.2 miles, then? The marathon took place a year after the day David Propp, one of Pascoe’s close friends, fell over the cliffs on Del Playa and passed away. In memory of Propp, Pascoe gathered a group of friends, donned a funny hat and tested his limits with the run.

“I really wanted to run my marathon and see how far my body would take me,” Pascoe said.

Pascoe didn’t cross the finish line — he made it halfway through mile 18 when his hip flexors gave out — but the fact that he ran 18.5 miles with absolutely no training was a feat enough in itself for Pascoe. After all, he pointed out, he was not there to break records; he was there to make memories.

“The atmosphere was amazing. I really loved that component of it. It was a bunch of running nerds.  They’re all super prepared to do it, but they’re just a bunch of people from all walks of life,” Pascoe said.  “I got to hang out with people who weren’t opposed to chatting as they ran and get their stories.”

For those who one day aspire to run the Santa Barbara International Marathon or Half Marathon, or any marathon for that matter, Lyon reminds runners to listen to their bodies.

“Always be reasonable with what your body can do, because if you try to run eight miles if you’ve never run before in your life, you’re going to be miserable and hate running,” Lyon said. “Stay confident in yourself. People get discouraged because they can’t do it at first, but you feel really accomplished if you build up to it.”

Inspirational piece, with a lesson on tenacity and perseverance. There should be more pieces like this.