The Daily Nexus
News
Erosion endangers patios along Del Playa Drive after storm
January 24, 2023 at 10:29 am by Nisha Malley

The series of rainstorms that pummeled the California coast last week caused damage to private properties and beach access points in Isla Vista, including erosion underneath oceanside patios. 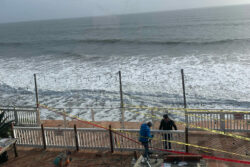 The Santa Barbara County Department of Planning & Development conducted an aerial survey of the bluff on Jan. 5 and walked along a portion of the bluff to assess erosion ahead of the storm, according to Plowman.

The survey identified blufftop erosion that had caused two oceanside patios, located at 6597 Del Playa Drive and 6599 Del Playa Drive, to unsafely hang over the cliff edge. The landowners hence pulled the fences back from the cliff edge and removed the overhanging portions of the patio, as mandated by county planning.

While the recent storms present a likely cause of the erosion, Plowman said she could not definitively attribute the bluff’s degradation to the rainfall.

“It could have happened as a result of the rains that had led up to that time because there had been pretty steady rain through December, but I can’t say for sure,” Plowman said.

“Due to the rough swells, we are really advising a lot of caution in approaching blufftop fences,” Sydney Castañeda, community engagement director for the Isla Vista Community Services District, said.

Santa Barbara County Parks has plans to pull back the fences at Pelican Park and Sea Lookout Park, which have grown closer to the cliff edge after years of erosion, according to Castañeda.

The residents at 6599 Del Playa Drive, a five-bedroom house rented by a group of 18 tenants, noticed the erosion and contacted their property management company PlayaLife I.V. (PlayaLife) on Jan. 7, requesting repairs to the deck.

“The cliff below our deck has been eroded from the storm. We’d like someone to come check which parts of the deck are still safe,” the tenants wrote in the submitted maintenance request.

Fourth-year communication and environmental studies double major Quinn Costello said workers addressed the issue over the course of three days, from Jan. 10-12. In that time, the workers dismantled and reinstalled the fence, bringing it an estimated six feet closer to the property. The overhanging patio was also cut down and removed from the beach. The patio’s cement curbs, reinforced by rebar, were destabilized by the erosion and removed as well.

Multiple residents expressed their discontent with the lack of communication from PlayaLife about the stability of the patio and the repairs that would take place.

“There was not communication of when the deck would be fixed or how much they were taking off,” Costello said. “All communication, we had to seek it out, but that’s pretty representative of all of our communication with PlayaLife. They’re not exactly the most responsive.”

PlayaLife manages 40 properties in I.V. and markets itself as a “luxury beach front” rental company. PlayaLife management did not immediately respond to requests for comment.

Fourth-year communication major Grace Thiemann lives in the neighboring house with shared access to the patio. She attested to feeling frustrated and scared during the experience, exacerbated by a lack of communication from PlayaLife.

“They literally didn’t inform us of anything,” Thiemann said. “We were all sitting here scared for definitely a handful of days, and we didn’t hear anything and they wouldn’t respond to us. They weren’t responding to any parent.”

“PlayaLife gets really difficult. We have a bad relationship with them, I would say,” she continued.

Ida Nevstad, fourth-year economics major and housemate of Thiemann, said she never received any safety information from the property management company about the structural integrity of the patio or house.

“We would have appreciated them communicating more,” Nevstad said. “Now that they’ve moved it, it’s fine, but they didn’t say anything while the storm was happening or tell us that they were going to move it. They just kind of did it, so it would have been nice to know that they were monitoring it.”

Plowman said the county sent out notices to landlords with properties identified as “vulnerable” on Jan. 8, stating public safety concerns with the upcoming storm. The landowners generally cooperated, according to Plowman, with one property management company reaching out to the residents living in its 30 properties.

“They had been communicating with their residents to advise them to not go out on the bluffs during the storm events, so they’ve been cooperative,” Plowman said.

Plowman could not confirm the name of the property management company mentioned. PlayaLife sent a text message to its residents on Jan. 4.

“It has been reported that a major storm is headed to Isla Vista. We strongly advise everyone to stay off the back patio and away from the railing during this time,” the message read.

Concern over the degradation of the bluffs along Del Playa is not new, and community members have frequently tended to the issue over the years following a hazardous event.

The bluffs are constantly retreating at a rate between two and 14 inches per year, according to property line surveys conducted by the county in 1965 and 1984. The cliffs can collapse by several feet suddenly and without warning due to severe weathering, wave action or landslides.

“It’s been eroding, and you’ve seen that because we’ve been having to cut buildings back.
I think that’s inevitable,” Plowman said of the bluffs.

After a heavy storm in 2017, a part of the cliff at 6653 Del Playa collapsed into the ocean, taking a chunk of the oceanside balcony with it. The landowner demolished four units deemed unsafe, forcibly displacing 28 residents.

Plowman issued a message of caution, advising people to stay away from the bluffs while the ground remains highly saturated.

“During storm events and after storm events, they should be staying off the bluffs and away from being under the bluff because the soil is saturated and we’ve had high surf,” Plowman said. “I think you have to be cautious and use your common sense.”

The county regularly assesses the bluffs in Isla Vista on a quarterly basis and plans to do a complete walk along the bluffs to assess erosion when weather and tide conditions permit.