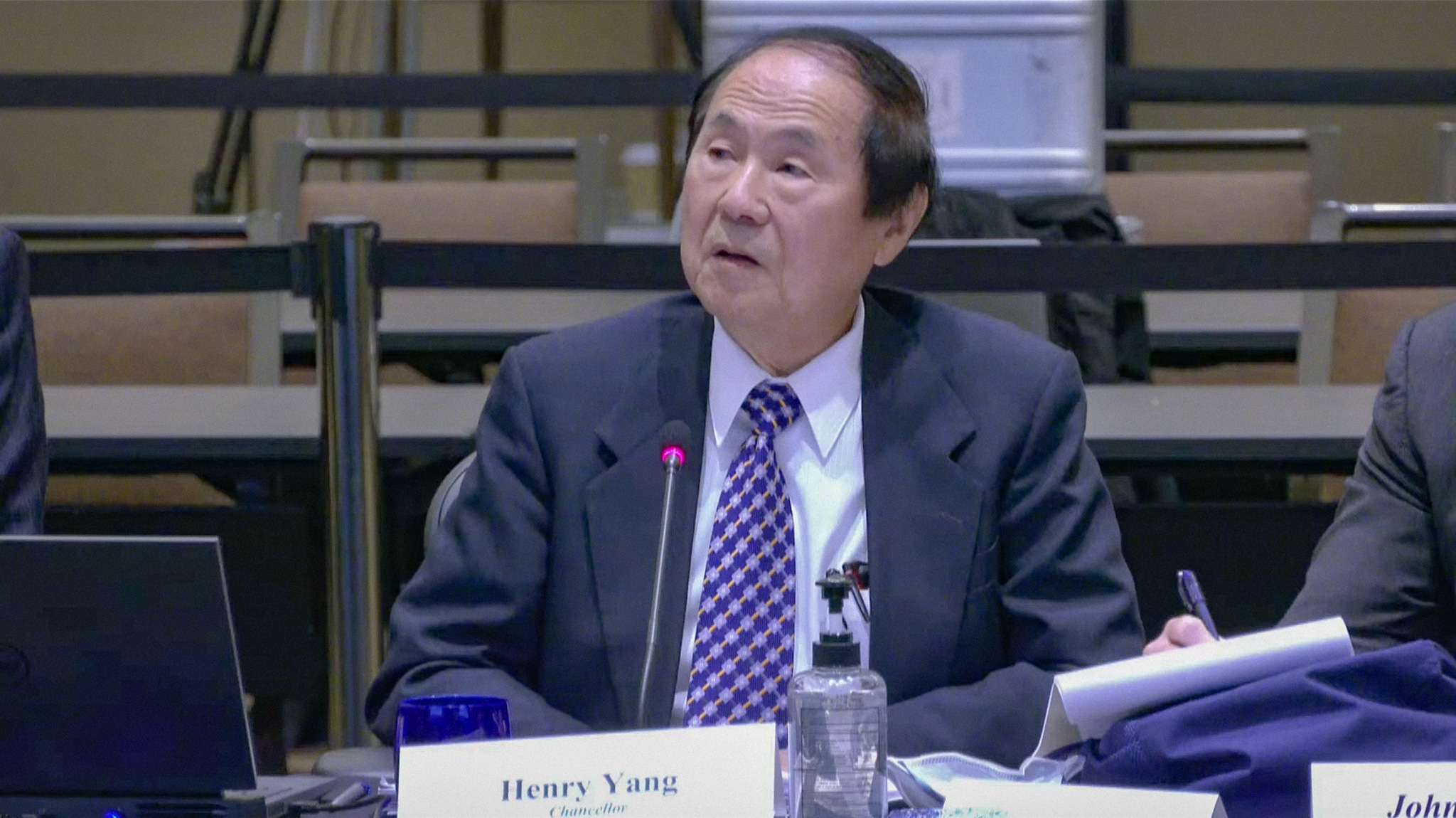 Yang lauded the campus’ consistent ranking as a top 10 public university and No. 1 ranking Hispanic-Serving Institution before providing updates and announcements relating to campus development.

Yang announced that UC Santa Barbara is preparing another long-term fundraising campaign, heralding in a new phase of campus philanthropy with an initial goal to raise around $2 billion in private donations.

“Many of these recent gifts, coupled with the impending commitments over the past few years, position UC Santa Barbara to launch its next comprehensive campaign,” Yang said. “The campaign will seek to raise $2 billion in the silent and public phase with a preliminary plan to conclude the campaign in the year 2030.”

UCSB first embarked on a long-term fundraising campaign in 2000, an effort led by Yang for the university. Fueled by thousands of small donations and dozens of multi-million dollar gifts from wealthy individuals, corporations and foundations, the campaign for UCSB brought in over $1.1 billion between 2000 and 2016.

Yang’s original campaign had an initial goal of raising $350 million over seven years. Now, based on how far UCSB’s fundraising efforts have developed in the past 23 years, the university’s opening goal is around $2 billion.

UCSB anticipates it will move into the pre-approval “silent phase” of the campaign in the next year ahead of the campaign’s public launch in 2025 following approval from the UC Office of the President (UCOP) and Regents. That public phase is expected to run from 2025 through 2031, during which time UCSB has a target of raising $1.2 billion.

Yang spoke briefly on the topic of student housing, stating that plans to add student bed spaces in the proposed Munger Hall dorm would benefit both the campus and community at large.

“Affordable student housing is a priority for the campus. The proposed Munger Hall project design could be an important step on this front,” Yang said. “Its construction would help reduce density in a neighboring community in Isla Vista and would provide an additional on-campus options for UC Santa Barbara students at a cost lower than current off-campus alternatives.”

The chancellor said that the campus continues to consult with its community on the issue of student housing and that the university will return later to the Regents as early as summer to share its updated plans.

When asked by multiple Regents what the construction and development timeline is for Munger Hall, Yang was unable to provide any specifics, but said the campus is continuing to consult with the community to try and build a consensus regarding the project.

“We have done a lot of listing and a lot of input, so we just have to take time to hear all of the opinions and then try to see if we can appeal to some consensus,” Yang said.

UCOP Executive Vice President and Chief Financial Officer Nathan Brostrom said that the Munger Hall project team is looking into making some changes stemming from recommendations outlined in the recent Academic Senate report on the project.

“We hope to come back, possibly as early as this summer with a new design that would have to have an addendum to the [Environmental Impact Report],” Brostrom said.

“Why does it have to wait until summer?” Regent Richard Sherman asked in response. “It’s just very frustrating.”

The chancellor also highlighted other housing projects underway at UCSB that aim to add further faculty and staff housing to the campus, including a staff and faculty housing project that would entirely remake the border between campus and Isla Vista that runs the length of Ocean Road.

Planning for the Ocean Road faculty housing project dates back 20 years to documents prepared by Urban Design Associates as a part of their largely unrealized plans to reshape the campus, but was delayed due to public pressure.

When completed, the project is expected to add 540 faculty and staff housing units to the university, replacing the area where the current Eucalyptus Curtain stands. UCSB is looking to break ground on the project later this year.

Yang presented a variety of information to the UC Regents regarding UCSB’s progress on research, innovation, equity and student success, among other topics.

UCSB has witnessed a “substantial growth trend” in extramural funding and innovation in recent years — with $241.5 million in total research funding for 2022, the strategic campus overview report said.

In order to maintain their goals of increasing extramural funding and commercial adoption of UCSB technologies, the university will continue to focus on quantum science and materials, biological engineering and materials, and coastal science as areas of research interest.

“Cross-cutting all these efforts, and many others, is a strong, campus-wide desire to have an impact on environmental resilience and justice — to create new innovations and industries that would propel a sustainable economy with greater equity in its treatment of all populations,” the report said.

During the academic affairs committee meeting, Yang discussed the construction of the new Interactive Learning Pavilion, a classroom building that is set to open this spring quarter.

“I walk on the campus every day and saw that the construction of this project is on time and on budget. This is the first building dedicated to instruction on campus in almost 50 years,” Yang said.

He also mentioned past purchases and renovations of Santa Catalina, Tropicana Gardens and Embarcadero Hall in I.V. to help create “a neighboring community that better compliments our stature as a world-class research university.”

The report also noted the university’s increase in prestige and rank over time. Three decades ago, the campus received 16,000 applications, had an 85% acceptance rate and underrepresented minorities made up only 14% of the school’s population, according to the report.

In 2022, UCSB received 110,000 applications, had a 26% acceptance rate, 31% of enrolled first-year students are underrepresented minorities, and is ranked No. 7 in public universities by the U.S. News & World Report.

“Today, UC Santa Barbara is a premier research institution with outstanding faculty, talented and diverse student body and a growing and extraordinary alumni base,” Yang said during his presentation. “We’ve already reached our [Long Range Development Plan] goal of 25,000 students a year.”

To augment UCSB’s HSI status, the university has joined the Alliance of Hispanic Serving Research Universities, “a voluntary association of universities that are both Hispanic-Serving Institutions and in the top five percent of universities in the country for research,” the overview read.

UCSB is also aiming to meet California Gov. Gavin Newsom’s requirements for the UC to earn a 5% state funding increase by eliminating racial and other gaps in 4-year graduation rates and increasing STEM degrees and credentials by 25%.

To help meet this goal, UCSB will be implementing a summer bridge program for incoming Black students to succeed and graduate on time.

“The campus community, in keeping with the academic mission of the University of California to educate its residents, strives to create an environment that is welcoming for all sectors of the state’s diverse population, and that is conducive to the development of each individual’s highest potential,” the report read.