The Daily Nexus
Simply Stated
Simply Stated: What can really be expected from the Ocean Road Housing Project?
August 29, 2022 at 8:53 am by Emma Holm-Olsen and Anaya Khan

With the majority of UC Santa Barbara’s community affected by the current housing crisis, the administration is faced with the challenge of providing housing for the growing number of students, staff and faculty.

The Ocean Road Housing Project aims to develop up to 540 housing units for faculty and staff on the 16.7-acre stretch that resides between UCSB and Isla Vista. The first phase is scheduled to begin in late summer 2023 and one-third of the construction is set to be completed by 2025. 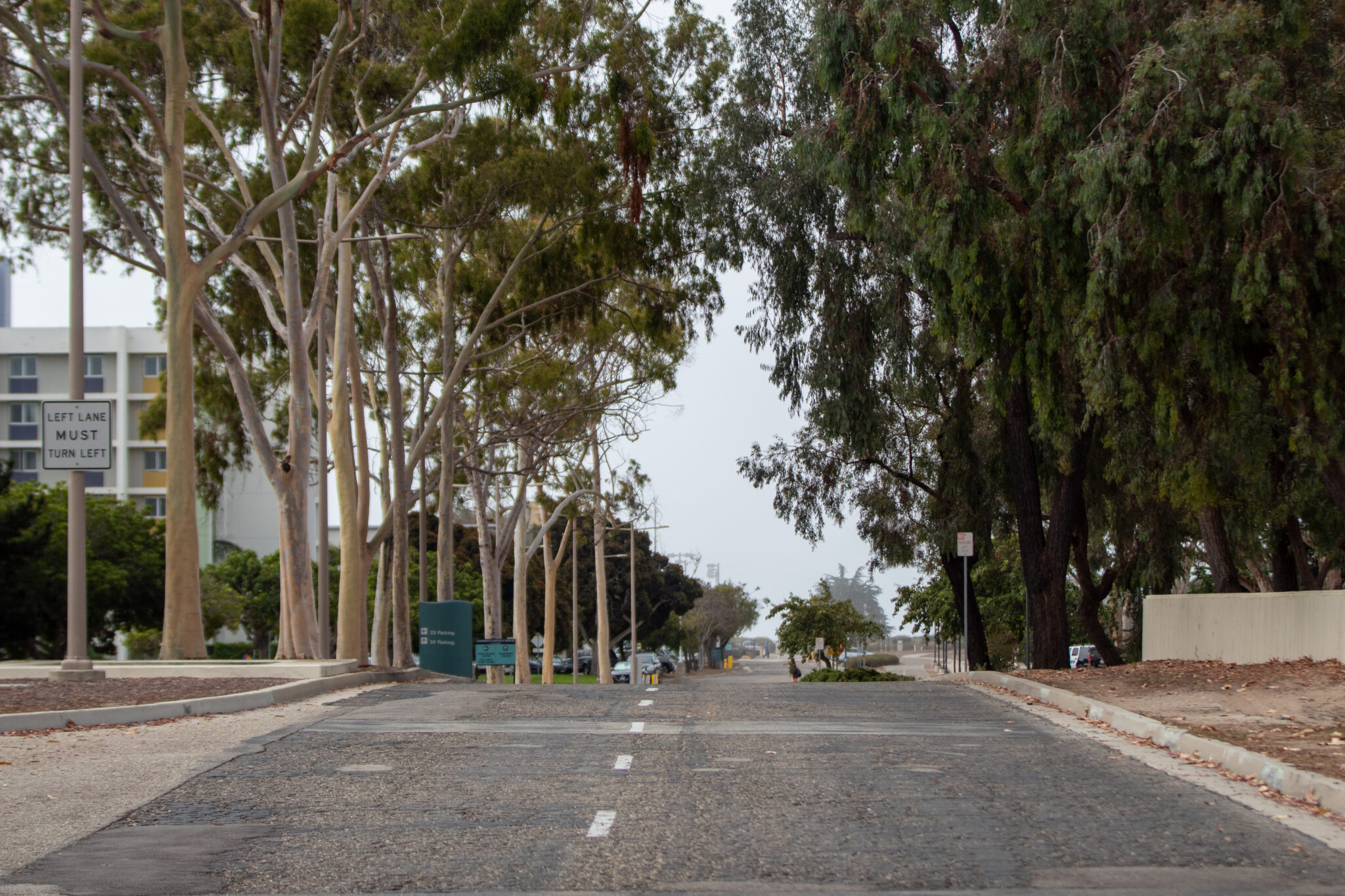 With the removal of the Eucalyptus Curtain, there will be noticeably less green space, more traffic and noise pollution along Ocean Road. Despite the expected environmental impacts, these impacts might be minimized by planting native trees upon the advice of experts at UCSB. Essa Shamsan / Daily Nexus

While the Ocean Road project is a step towards combating the growing necessity for housing in Goleta and Isla Vista, there are several expected negative impacts on the environment and community of the affected area.

The proposed housing units would be situated right where the so-called “Eucalyptus Curtain” is today. The Eucalyptus Curtain is a stretch of Eucalyptus trees marking the boundary between campus and Isla Vista, and is home to many species of migratory birds and insects.

One such species is the endangered monarch butterfly. Biologist Adam Lambert said that while monarchs in California would historically roost in native tree species, they have taken to eucalyptus trees due to the virtual extermination of many of the state’s native tree species, such as the Monterey Pine and Monterey Cypress.

“Overall, eucalyptus serves an important ecological role in supporting overwinter monarchs in the absence of sufficient native vegetation,” Lambert said. “However, the habitat potential of any given stand and implications for supporting monarch conservation efforts should be evaluated to truly understand how removal might affect butterflies.” He added that if the Curtain is taken down, it would be ideal if native tree species were planted in its place.

Ecology, Evolution, and Marine Biology (EEMB) professor Douglas McCauley stated that despite his love of all trees, eucalyptus are not his highest priority. “I’m fond of all trees for the carbon they capture and other services and aesthetics they bring to campus,” he said. “But, I’m also aware that these eucalyptus are non-native species and a relatively new arrival to SB.” Similar to Lambert, McCauley hopes that in the event of the removal of the Curtain, it will be replaced with a grove of native oak trees.

The history of eucalyptus trees is rooted in colonialism and, according to EEMB assistant professor Leander Anderegg, they stand as icons that represent the erasure of indigenous communities. Professor McCauley additionally stated that they were brought and planted by European settlers in hopes of generating wood needed for construction. The trees did not, however, regenerate at the expected speed, and so were left to adapt to an environment they were unsuited for.

“[It] turned out it took many decades longer than anyone anticipated to have them generate halfway decent timber so they were abandoned and have created some challenges for other flora and fauna,” professor McCauley said.

The devastating legacy of the colonists is echoed in the eucalyptus trees, which continue to serve as a reminder of many of the atrocities committed against indigenous populations. In this regard, the removal of the Curtain may be a necessary step.

Another potential issue with the housing proposal is the further deterioration of the line between the UCSB campus and Isla Vista. With the removal of the Eucalyptus Curtain, there will be noticeably less green space, as well as likely more traffic and noise pollution along Ocean Road. While these human and ecological impacts are expected, experts including EEMB Assistant Professor

While negative human and ecological impacts are expected, professor Anderegg suggests that the Ocean Road area may be the best location for the impending housing construction, given that it is already heavily developed. According to him, Ocean Road may be the only place where the housing could logistically go without causing more problems. He said that the resident raptors would not be greatly harmed, although the monarch butterflies are expected to be impacted.

With the initial stages of planning begun, the future of the Ocean Road project towards appeasing the housing crisis is essentially determined. Despite the expected environmental impacts, these impacts might be minimized with the potential of planting native trees upon the advice of experts.

A version of this article appeared on p.11 of the August 25, 2022 print edition of the Daily Nexus.

CORRECTION [9/26/22, 7:26 p.m.]: A previous version of this article incorrectly stated that the Monterey Pine and Cypress species are native to the local area (Santa Barbara). This article has been corrected to reflect that while these species are a few of the monarchs’ preferred roosting habitats elsewhere in the state, and have been decimated throughout the California coast (just as species native to the Santa Barbara area were decimated as well), they are not native to the Santa Barbara area, and were never prime monarch habitat in this location.

Committee to save Isla Vista

The Eucalyptus Curtain is an ESHA and should be protected. Ocean Rd should be for much needed student housing by expanding the dorms that are already there, instead of the Orwellian Dormzilla. Hey Professor, what are all the Palm Trees a symbol of?

Absolute scum take about eucalyptus trees and colonization. How can you be concerned about keeping trees which are “echoes of colonization” while ignoring that the land today is controlled by HUMAN COLONIZERS without regard for the Chumash peoples who are the first peoples of this land and who are routinely excluded in decisions about the land. Of course the Nexus chooses to quote white biologist professors instead of community organizers and those with traditional ecological knowledge. Y’all can do so much better.

I’m sorry–The Nexus and sources need to do their homework. Biologist Lambert states monarchs would roost in trees native to the area, such as the Monterey pine and cypress, tthat they have taken to eucs due to extermination of native tree species. That is bunk as far as I know. Monterey pine and cypress are not native to south coast or SB County. They were not exterminated here. And the monarchs–well, they chose the blue gum eucalypts for their unique microclimate. Ask any of us who have worked to protect the Ellwood Complex, the groves hosting migrating monarchs next door… Read more »

Leander Anderegg managed to pack more misinformation into a few short sentences than half the banned accounts on Twitter ever could. Good job Nexus!