The Daily Nexus
UCSB
UCSB women’s swim team excels in academics over the past decade
January 18, 2023 at 9:18 pm by Michelle Tekawy and Alice Zhang

The UC Santa Barbara women’s swim team is an NCAA Division 1 team that competes under the Swimming & Diving – Mountain Pacific Sports Federation Conference. Since the 1950s, the UCSB women’s swim team has consisted of swimmers mainly from California and a number from out of state.

Over the past 10 years, the Gaucho women have earned huge victories in and out of the pool. While winning multiple conference titles and having NCAA and Olympic Trials qualifiers, the Gaucho swimmers have also been able to stay academically competitive and sustain high quarterly GPAs. The women’s swim team has also shown notable improvements in their average GPAs.

The College Swimming & Diving Coaches Association of America (CSCAA) is an official intercollegiate swimming and diving committee that announces the quarterly or semesterly GPAs every year for all the collegiate swimming and diving teams from Divisions 1-4. With a minimum 3.0 GPA, CSCAA selects collegiate teams for CSCAA’s Scholar All-America, an honorary award for not only the swim team but also the university.

Since 2012, the high GPAs of the UCSB women’s swim team have allowed them to be selected as a Scholar All-America Team, which is awarded after each fall and winter quarter. The team’s GPAs are shown in Figure 1. 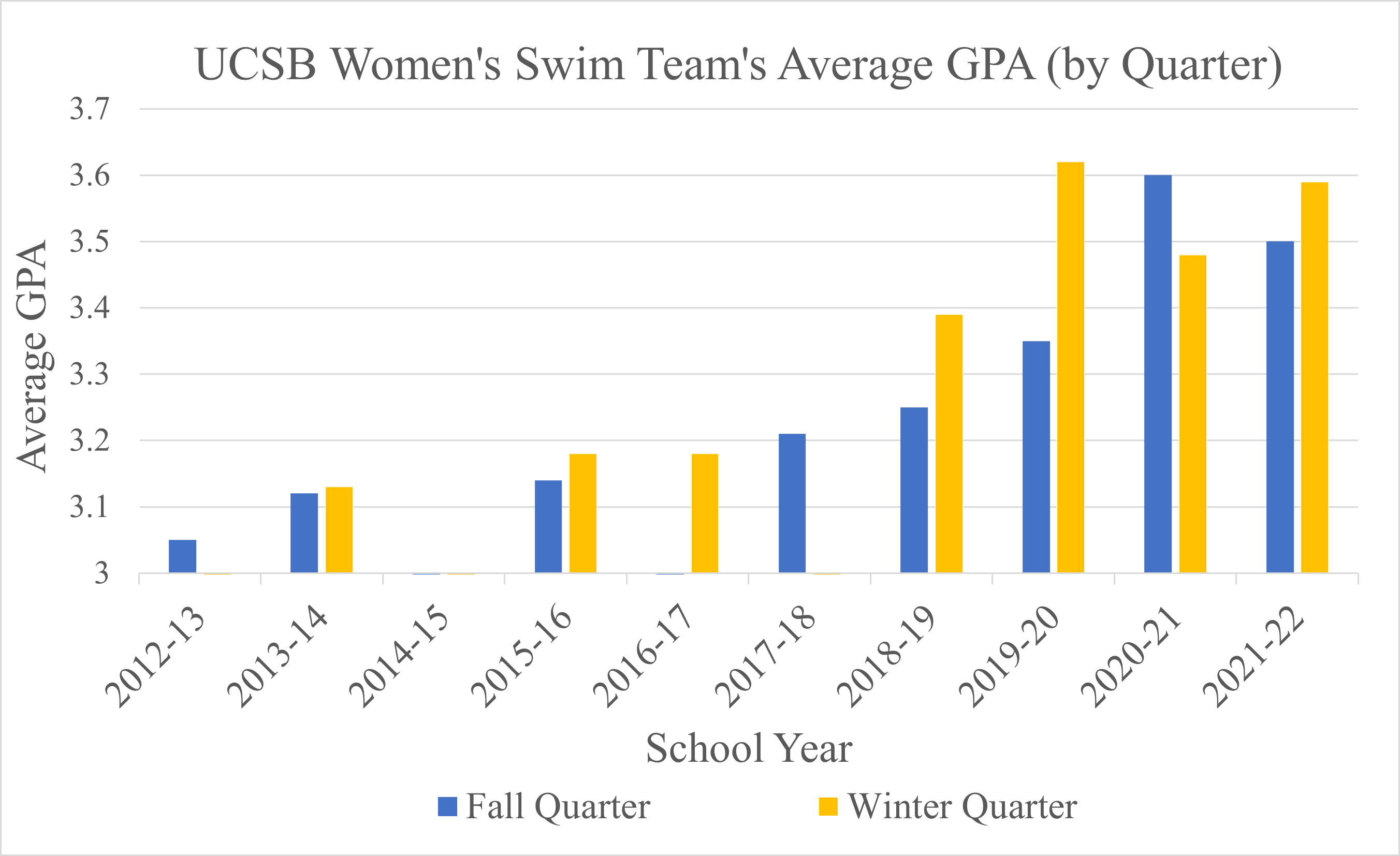 *Some bars are left empty to represent unavailable data for that year or quarter. Data from Spring Quarter 2022 is not studied in this article since collegiate swimming is not in season during this quarter.

Analyzing the bar graph in Figure 1, there is a positive increase in the team’s GPA for both quarters over the last 10 years.

Another finding from the data is that the team tends to have a higher average GPA in the winter than in the fall. Although some quarterly GPAs were not published in earlier years, it is still evident that there is a significant rise throughout the years. 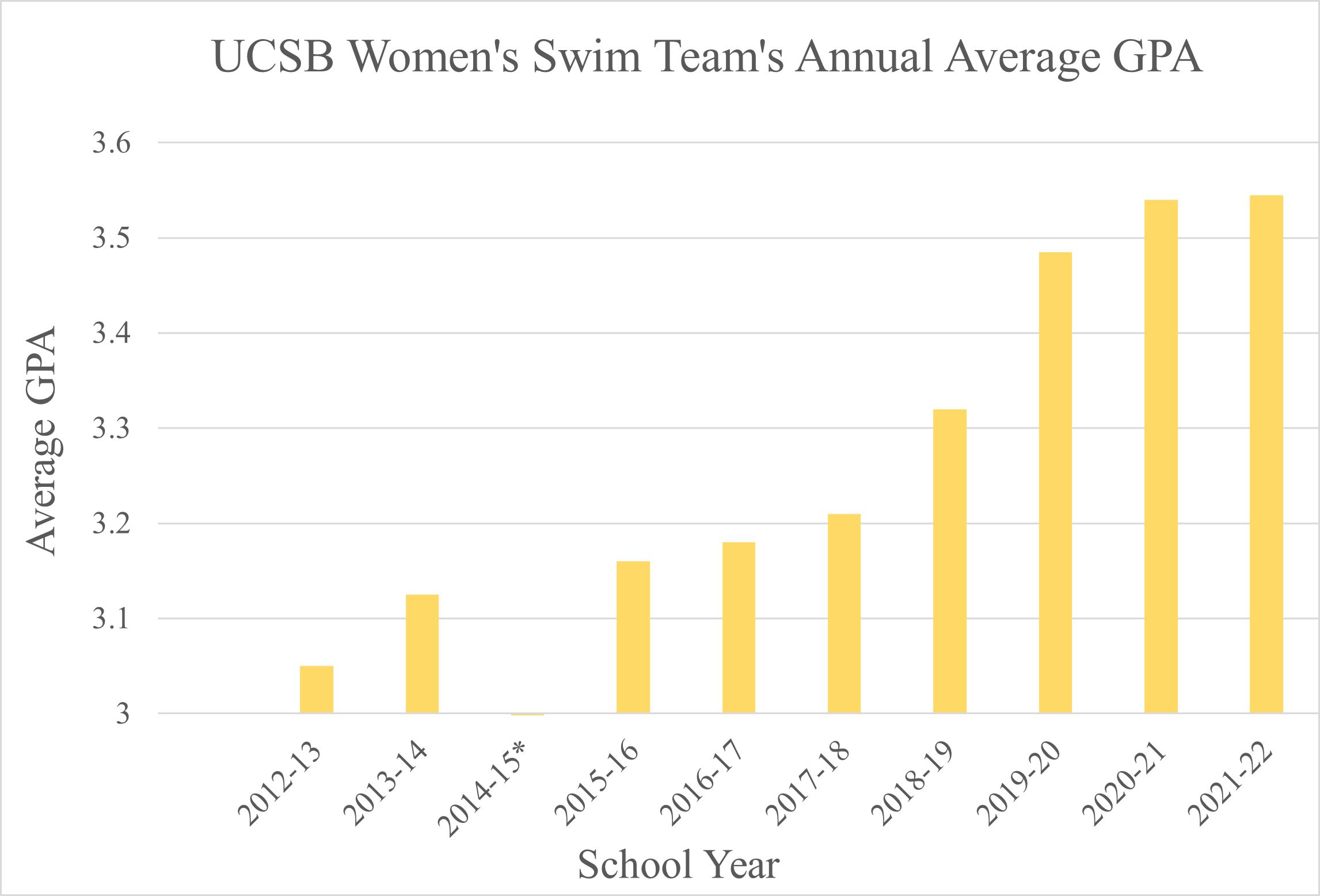 The bar graph in Figure 2 shows the gradual growth of the Gaucho women’s GPA. This pattern follows the trend from Figure 1, since both their fall and winter quarter GPAs were increasing every school year.

The greatest change in annual GPA number occurred between the 2018-2019 and 2019-2020 school year, when the Gaucho women bumped up their GPA by 0.165. That is why the bar graph shows a slight upward curving trend during those years. 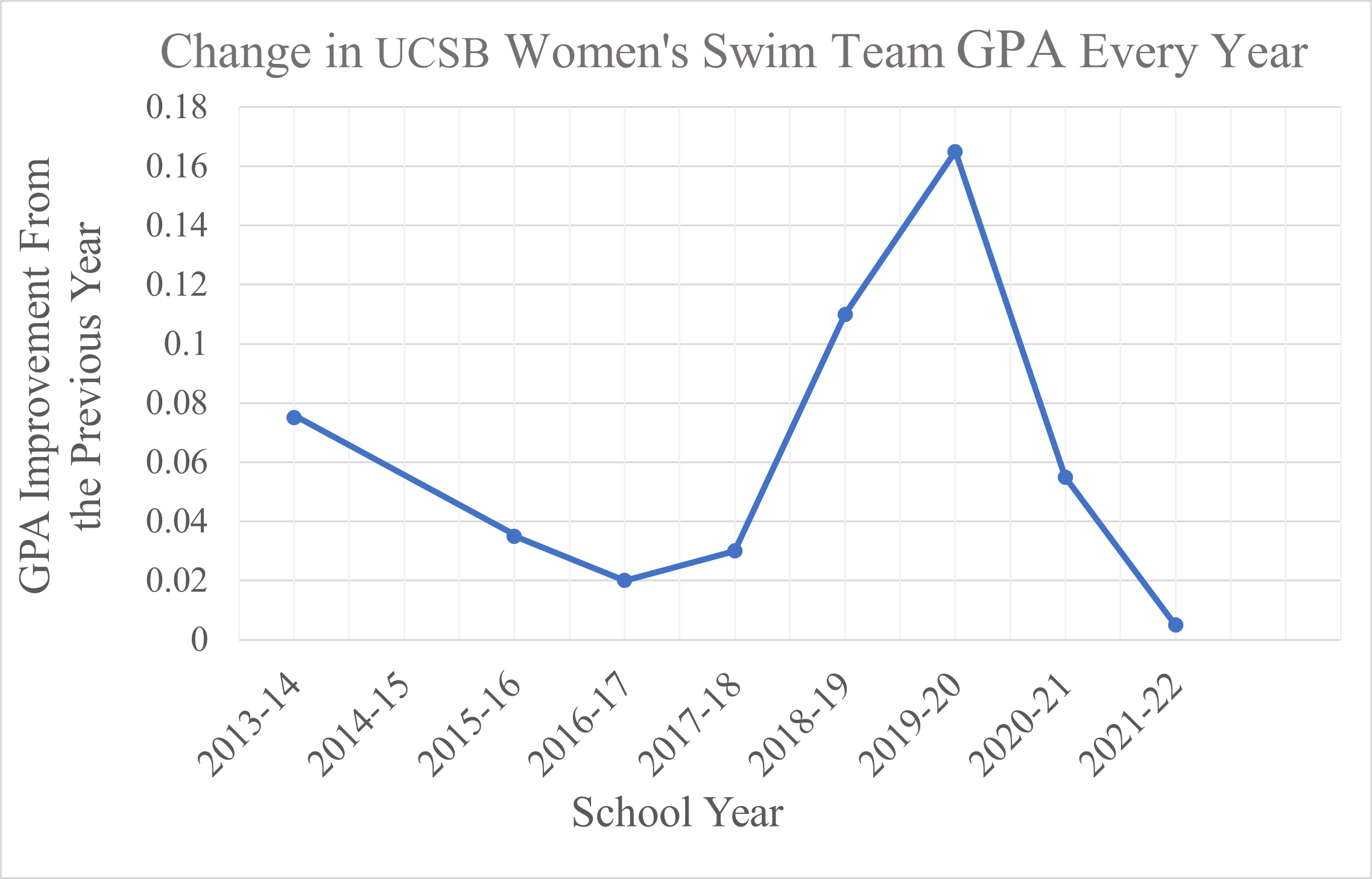 Figure 3 depicts the average change in GPA of the team. Note that the GPA change from the previous year on the graph is positive, meaning the team’s GPA has been increasing every year. For example, the GPA in the 2013-14 school year increased by 0.075 from the 2012-13 school year. The cumulative GPA change over the 10 years is the area under the curve of Figure 3. The total cumulative change is roughly 0.50 improvement over the years.

The COVID-19 pandemic, which resulted in online school for the end of the 2019-20 school year and the entirety of the 2020-21 year, influenced the year inside and outside of school.

“Not being able to talk to my professors face to face or have discussions with my classmates made me feel lost at times,” said Gillian Flath, senior member and co-team captain of the UCSB women’s swim team. “It was sometimes difficult to stay engaged over Zoom.”

Mark Stori, a UCSB women’s swimming assistant coach, emphasized the team’s ability to adapt to the challenges presented by COVID-19.

Interestingly enough, all three figures show how the year 2020 actually made the biggest conspicuous spike from its previous year compared to the other school years for the swimmers. In Figure 1, the winter quarter GPA was raised by 0.23, from the 2019-20 year. Similarly, the Fall Quarter 2020 GPA was 0.25 higher than the Fall Quarter 2019.  Regarding the GPA change from the prior year as shown in Figure 3, the Gauchos’ GPAs increased by 0.165 from the 2019-20 year.

When in season, the Gaucho women have to dedicate up to 20 hours in their weekly schedule for practices, in addition to traveling for swim meets or community work.  The long hours make it harder for the swimmers to spend time studying for their classes.

Reagan Nibarger, junior member and co-team captain, admitted  how the rigorous hours of training makes classes more difficult, saying, “Taking hard courses can be super challenging when you are training 20 plus hours a week and traveling on the weekend.”

However, even though  in-person lectures, TA sessions, office hours, classroom engagements and resources, such as the library and CLAS, were no longer available for the athletes due to quarantine laws, the COVID-19 pandemic gave the swimmers time away from the pool to really focus on school work. This meant the Gauchos no longer needed to spend their 20 hours on swimming-related purposes.

“Not having long hours of practice helped me feel like I had more time to do things outside of swimming,” Flath stated.

It can be said that this allowed the swim team to excel in their remote classes and achieve a high 3.62 GPA for Winter Quarter 2020.

The team GPAs are mostly higher in the winter quarter relative to the fall, which can be explained by the layout of the collegiate swim season.

During the winter quarter, the team competes throughout all of January and half of February. Swimming is mainly considered a winter sport, as more dual and championship meets take place over those busy one and a half months.

As such, the Gauchos pick their winter classes carefully, typically aiming for fewer classes (but still meeting NCAA’s 12-unit requirement), and also easier, more flexible ones. This strategy allows the swimmers to have more time for competitions and training, as well as a more lenient schedule to reduce academic stress.

“Winter quarter is a little more stressful than fall quarter as [the swim team is] traveling more and getting ready for our conference meet in the middle of February, so the quarter seems to fly by,” Nibarger said.

To explain the GPA improvements as a whole, coaches continue to emphasize academics by requiring study hall hours for their swimmers. Swimmers are required to work and study at the Intercollegiate Athletics (ICA) building’s study hall for at least eight hours a week for freshmen, and a given number of hours for returners that have a GPA below 3.0 in their previous quarter.

By doing this, the women’s swim team has both time and access to an optimal study environment. In addition, having new academic advisors that enforce good grades over the last couple of years has allowed the team to seek advice and plan out their classes and academic careers while also being successful in the water.

“The athletic department has been super helpful with helping all the student athletes stay on top of their GPAs, workload and relationships with their teachers all while being communicative with their coaches,” Nibarger said.

In addition to the athletic department’s support for the athletes, there’s a strong dynamic between upper- and lowerclassmen when seeking academic assistance and advice.

“The older swimmers will offer advice to younger swimmers on how to manage their time better,” Stori said. “By their sophomore year, swimmers learn how to balance school and swim.”

Overall, the UCSB women’s swim team has made significant progress with their GPAs. Collegiate swimming requires a lot of time and sacrifice, being that they are in-season during both the fall and winter quarters. Regardless, the Gauchos have shown that they could maintain good grades and continue raising their quarterly and annual GPAs within the last 10 years. While there is still room for growth, the team is excited to continue to improve their GPAs and earn the title of a Scholar All-America team.