The Daily Nexus
Volleyball
Gauchos lose to No. 2 UCLA in the last match of Asics Invitational
January 17, 2023 at 7:56 pm by Isaiah Ochoa

On the final day of the Asics Invitational, the UC Santa Barbara men’s volleyball team took on UCLA in Robertson Gym, where the Bruins walked out with a clean, three-set sweep (26-24, 25-16, 25-14). 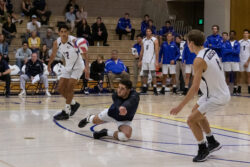 In the first set, the Gauchos looked to set the tempo early after losing the previous day to Lincoln Memorial. Early in the set, UCSB was up 8-4, forcing UCLA to take an early timeout to regroup. The Bruins made good use of the timeout by catching up to the Gauchos and tying the score at 12-12. The two teams would then battle for the lead, resulting in 16 tied scores and 7 lead changes.

UCSB was up 24-23 after a service ace from Bruin senior libero Troy Gooch, needing 1 more point to seal the first-set victory. However, UCLA would score 3 points to push the set into extra points and steal set one.

Going into the second set, the Gauchos would continue to fight to keep the score close in the beginning. UCSB would gain 2 points with kills from sophomore opposite Geste Bianchi and junior middle blocker Donovan Todorov.

After a service error from UCLA, the score moved to 7-6. The Bruins did not give the Gauchos another chance to strike within one point again. The Bruins would go on an 18-to-10 run where they would seal the second-set victory at 25-16.

Both teams were battling for every point they could have in the third set by running all over the court and not letting the play die. UCSB would keep it close to UCLA, forcing back-to-back attack errors, making it 7-5 in UCLA’s favor.

However, UCLA had other plans. The Bruins controlled every part of the set; they would take the third set with a score of 25-14, wrapping up the Asics Invitational.

The numbers didn’t lie, as UCLA completely controlled this game through hitting percentage, blocks, digs and aces. The two most substantial team statistics were UCLA’s hitting percentage at 42% compared to UCSB’s 8%, and UCLA’s 7 blocks.

Sophomore setter Jack Walmer would finish with the most digs on the team at 6 digs, and 19 assists throughout the match.

Bianchi and freshman outside hitter Ben Coordt would tie each other on the night for most kills on the team, with 6 apiece to their name. The two would have an ace under their name as well.

The Gauchos look to move past the Asics Invitational, where they will be on the road next week to Palo Alto to take on Stanford University.