UC Santa Barbara men’s basketball hosted UC Riverside for the first game of 2023 in the Thunderdome on Jan. 14. It was a packed and electric crowd, but the second half deficit was too large for the Gauchos to come back from, resulting in a 65-64 loss. 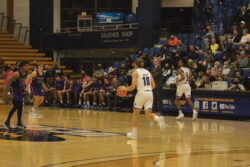 The Gauchos started the game on the right foot by winning the tipoff and scoring first off a Josh Pierre-Louis two-hand finish. The Gauchos followed up the dunk by playing excellent defense, where they held the Highlanders to 1 point three and a half minutes into the game.

UCSB played well on the other side of the ball as they led by 9 points with five minutes remaining in the first half. However, with a score of 23-14, the Highlanders looked to make it competitive after Ajare Sanni’s free throws.

After some missed open shots, especially from the 3-point line for the Gauchos, UC Riverside found themselves back in the game and leading after the first half. From being down by 9 points, the Highlanders led 27-25.

At the half, Pierre-Louis and Miles Norris both scored 7 points apiece, with Pierre-Louis shooting 60 percent. Norris was a dual threat on each side of the ball, having 1 block and snagging 3 rebounds.

Unfortunately for the Gauchos, the Highlanders continued to score and find open shots, extending their lead out of the break.

Seven minutes into the second half, UCSB soon cut down the lead to 2 points after a jump shot by Cole Anderson. Despite the jump shot,  the score was still 44-42 in the Highlanders’ favor.

UCR soon tried to take the Gaucho’s hope of winning by extending their lead in the late minutes of the game. With three minutes left, the Highlanders led by 13.

The Gauchos would not go down without a fight, as jump shots started to cut down on the lead and gain hope for a comeback. With one minute left of the game, Norris knocked down a clutch 3-pointer to cut the lead to 4 at 61-57.

The Highlanders soon scored a tough layup to bring the lead back to 6, but Ajay Mitchell quickly responded as he hit an and-1 layup to cut the lead to 3 points with 40 seconds left.

In the last five seconds, Anderson hit his 2 free throws to cut the lead to 1 point, where Koat Keat Tong stole the ball at half court to shoot a prayer for the win.

We spoke to Norris after and asked what the message would be to the team after a tough loss. Norris stated, “Playing hard down the stretch because too many offensive rebounds. I think that hurts a lot. Just play harder; they [UC Riverside] wanted it more. So I got to get on my team about that. That’s on me as well. You know, I’m not perfect. Nobody’s perfect. Being a leader on this team, you know I got to take accountability for that at home.

The Gauchos travel to UC Irvine on Jan. 16. Tipoff is scheduled for 7 p.m., and it will be on ESPN+.