After severe weather conditions impacted California over the past week, Gov. Gavin Newsom visited Santa Barbara County on Friday alongside local officials as a part of his statewide tour to discuss storm preparedness. 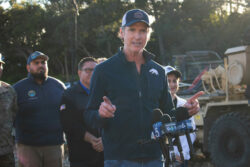 Newsom declared a state of emergency on Jan. 4 in anticipation of heavy rainfall, flooding and mudslides. The major storm on Monday — which forced local evacuations, road closures and shelter-in-place orders— came on the five-year anniversary of the deadly Montecito mudslides that killed 23 people and damaged 500 structures.

Newsom’s press conference was held at the Randall Road Debris Basin, previously the location of a deadly mudslide that killed 5 people five years ago during the Montecito mudslides. Newsom allotted 80 members of the National Guard to clean out the debris basin and create a channel for flowing water.

On Thursday, Newsom requested President Joe Biden to approve an expedited disaster declaration in response to the atmospheric river event “devastating” California’s communities. The letter called for additional federal assistance given ongoing threats to the geological landscape and public safety.

“We’re not out of the woods, and I guess that’s why I’m here. It’s why we’ve been up and down the state,” Newsom told the assembled group as he warned them to remain vigilant ahead of expected weekend rains statewide.

The National Weather Service (NWS) advised community members to prepare for the incoming rain this weekend, with expectations of moderate wind, high surf, minor coastal flooding and additional beach erosion. NWS estimated rainfall totals of 1.5 to 3 inches along the coast and up to 5 inches in the mountains.

The governor’s office stated that it expects recovery to take years to complete and to require the coordination of local and state resources.

“We’re going to see this through and follow through — we’re going to come back when the cameras are gone. That’s when the real work is done to make sure we don’t have to keep coming down under these emergency operations, [and] to have a more sustainable mindset,” he continued.

Newsom expressed gratitude for community members in Santa Barbara and elsewhere who were helping one another and working to move through challenging and sometimes life-threatening storm conditions.

“I wanted to thank the community. I want to thank you for your pride and spirit. Thank you for having each other’s back. There’s no substitute for that,” he said.

Santa Barbara County Board of Supervisor Das Williams said that the mudslides were a time of tragedy, but the community showcased a spirit of resilience, hope and rebuilding.

“On behalf of my fellow supervisors and the people this basin protects, I want to thank you, Mr. Governor, for providing us with the 80 National Guardsmen that are cleaning out this basin,” Williams said. “[And for] your request that you made yesterday for expedited disaster declaration in all categories for public assistance and individual assistance, and for being here with us in our hour of need.”

“I love that I’m from a state where you have a governor who demonstrates leadership every day, not for politics, but for the people of California,” he said. “This administration has done that with all counties and local governments throughout the state. And our county is no exception.”

“Whether it’s the ability to go to school, to go to work, whether it’s our own health, we understand that there is great impact across the county and across the region,” she said. “There are 41 counties currently in this state who have all suffered significant damage, and we are grateful to the governor for being here, to all of the state agencies involved, to the National Guard, to every public work employee that is working overtime right now for ensuring that our community is safe.”

Newsom told California residents to trust their intuition, err on the side of caution and listen to state and local directives.

“If you have an intuitive feeling that something just ain’t right, about driving left versus right, don’t do it … there’s a diversion up for a reason, Caltrans is there with a sign for a reason; law enforcement is saying what they’re saying for a reason,” he said.

The governor ended his speech by thanking state, local and federal officials and encouraging residents to remain vigilant and persevere through further storms.

“We’ll get through this and then we’ll get back to the real work that needs to be done, to make sure we can get through the next century. Continue to enjoy the greatest state God has ever conceived: the state of California,” Newsom said.