Santa Barbara County issued a flash flood warning in response to heavy rain and high winds in the area, effective until 12:00 a.m.

Academic Senate Divisional Chair Susannah Scott confirmed in a statement to the Nexus that UC Santa Barbara classes are canceled today and tomorrow. 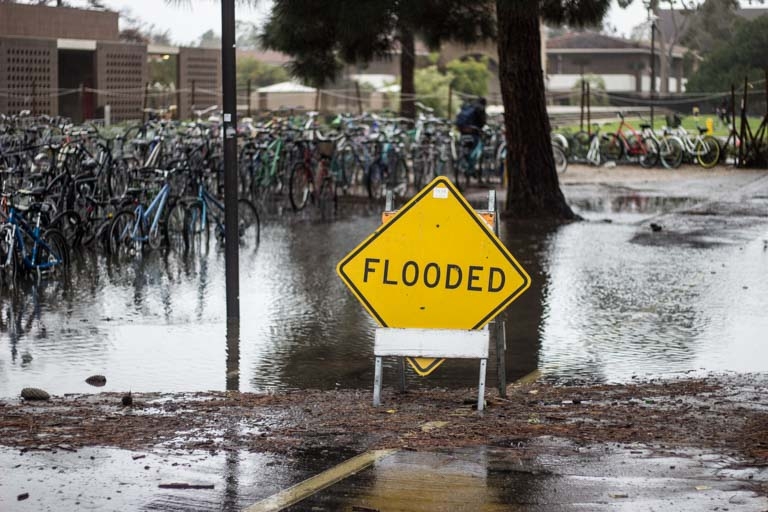 The closure, warning and evacuation orders follow county action on Jan. 4 amidst the heavy rain in the area. Nexus File Photo

“The campus remains open and the main campus is safe. This decision is related to the impacts to staff, faculty, and students who are being impacted by unsafe travel conditions, road closures, the flash flood warning, and shelter-in-place and evacuation orders,” Vice Chancellor for Student Affairs Margaret Klawunn said in a statement to Student Affairs Staff.

Following a press conference today, the county expanded Jan. 4 evacuation orders of areas within Thomas Fire, Alisal Fire and Cave Fire burn scars to all of Montecito, Toro Canyon, Sycamore Canyon and Padaro Lane. The evacuation order is now immediate and is issued to the entirety of Montecito, including all 15 zones of the community, along with everyone in the Carpinteria-Summerland Fire Protection District and Sycamore Canyon in Santa Barbara and Montecito.

An evacuation center is open at the Wake Center in Santa Barbara.

Those in the Santa Barbara County impact areas of Cave Alisal must comply with the shelter-in-place order by going into the innermost rooms if indoors or retreat to high ground if outside. Those in the area must not attempt to leave, and those who are not must remain out of the area until further notice.

The closure, warning and evacuation orders follow county action on Jan. 4 amidst the heavy rain in the area, where mandatory evacuation of burn areas in southern Santa Barbara were issued and a warning from UCSB was emailed to the campus community on Jan. 4.

Santa Barbara County reported that the Santa Barbara Airport is closed due to flooding in the area. With the closure, all commercial flights are canceled until further notice.

The Amtrak Pacific Surfliner train service is also now suspended between Los Angeles and San Luis Obispo in both directions, according to the Santa Barbara County Association of Governments.

The Nexus will continue to report on this topic as more information becomes available.

UPDATE [1/9/2023, 6:37 p.m.]: This article has been updated to reflect that the Santa Barbara Airport is currently closed due to the flooding.

UPDATE [1/9/2023, 6:58 p.m.]: This article has been updated to reflect that the Santa Barbara MTD bus service and the Amtrak Pacific Surfliner are temporarily changed.

UPDATE [1/0/2023, 9:58 p.m.]: This article has been updated to include that all evacuation and shelter-in-place orders are canceled for Santa Barbara County.