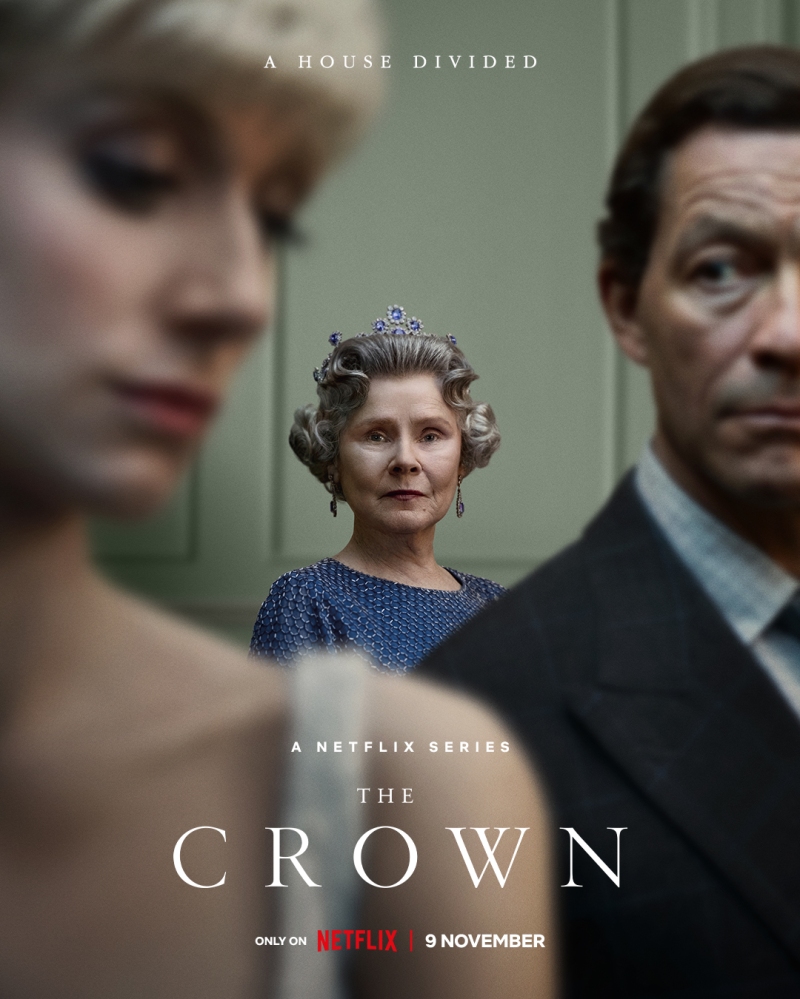 Netflix’s historical drama “The Crown” entered its final stretch with the release of its fifth — and penultimate — season on Nov. 9. Set a year after the events of season four, the recently released season stars an entirely new cast and takes place during 1991-97. While previous seasons centered on historical events and on the royal family, this season focuses entirely on the schism between the royal Windsor family, and the growing divide between Queen Elizabeth II and Prince Charles becomes its focal point.

Many have said that season five feels more dull compared to previous seasons. However, this season builds intensity in its own ways by creating a strong feeling of suspense and through powerful performances from the cast that convey the stakes of the situations the royal family find themselves in. Where it differs from past seasons, the latest season showcases its strength with incredible performances and impactful metaphors about the state of the monarchy as it enters a troubling time.

This season’s cast includes Imelda Staunton (“Harry Potter and the Order of the Phoenix,” “Vera Drake”) as an older Queen Elizabeth II, and her portrayal shows a quiet vulnerability in the Queen’s contemplation of her legacy and regrets while still demonstrating the figure of stability we’ve seen in previous seasons. While the past portrayals of Queen Elizabeth II — played by Claire Foy in seasons one and two and Olivia Coleman in seasons three and four — have been based mainly on archival footage and historical accounts, Staunton’s Queen Elizabeth II is one that viewers likely have some memory of, making her more familiar.

Staunton’s performance feels more poignant than the past portrayals of the Queen as she impeccably encapsulates Queen Elizabeth II’s turmoil over her legacy and whether or not she has left an impact on the “New Britain” that her son, Prince Charles (Dominic West) and Prime Minister Tony Blair (Bertie Carvel) are staunchly advocating for. With public sentiment turning against the royalty, the Queen examines whether or not she’s been successful as a monarch and if her idealization of the past, which she’s mocked for in the season opener “Queen Victoria Syndrome,” is compatible with the modern world.

One of the things that this season does well is deftly relate how the Queen feels as though she is part of a bygone era. Staunton’s performance paired with the several metaphors of aging and decay throughout the season create a meaningful commentary illustrating the Queen’s feelings of displacement with the current times.

Aside from Staunton, performances that stand out amongst the ensemble cast include West (“The Wire”) as Prince Charles and Elizabeth Debicki (“Tenet”) as Princess Diana who both play large roles in this season. With the disintegration of Charles and Diana’s marriage being a central part of the season, West and Debicki have copious amounts of screen time and shine in their roles as older versions of the pair. They masterfully capture the couple’s disillusionment with their relationship, and the resentment they feel toward each other and the royal “establishment.”

Charles and Diana’s imminent divorce is a key part of this season. However, the true turmoil of season five is between Charles and his mother, Queen Elizabeth II. In its essence, this season is about a turning point for the royal family, a point at which England’s movement toward a modern age forces them to reevaluate their positions. Queen Elizabeth II is suddenly at odds with Prince Charles, whose support for change within the monarchy and the country is antithetical to her own support for the ways of the past. Rather than focus on the external conflicts that past seasons of “The Crown” have touched on, such as the Suez Crisis or the John F. Kennedy assassination, this season highlights the growing divides within the House of Windsor and how, as Jonny Lee Miller’s Prime Minister John Major puts it, “it feels it’s all about to erupt.”

Perhaps why this season feels slightly lackluster to some is because it spends so much time leading up to that eruption. It feels prolonged as this season has a slightly slower pace. “The Crown” hasn’t shied away from controversy in the past, and the time period this new season covers has been known as one of the most mediatized and tumultuous periods for the monarchy: the 1992 Windsor Castle fire, Princess Diana’s iconic revenge dress and the dreaded “Tampongate.” Understandably, expectations for this season and its coverage of these events have been high.

However, despite being a drama series, many involved with production have stated that showrunner Peter Morgan attempts to be sensitive and respectful in his portrayals of the royal family — even if the royal family may not agree with the sentiment. Even though he’s faced criticism in the past for his depictions of the royal family, Morgan has maintained that he has respect and affection for the crown. This season may feel slightly different due to viewers expecting something more melodramatic than what Morgan’s style of writing delivers.

Although Morgan’s writing may not provide viewers with histrionic coverage of this low point in the royal family’s lives, this season is still intense and immerses the viewers in the high stakes that the characters find themselves in as they grapple with their roles and place in the modern world. All in all, this season is still an enjoyable view strengthened by incredible performances and stellar writing.