The Daily Nexus
Sports
Gauchos rangle up the Pacific Tigers
December 10, 2022 at 4:47 pm by Isaiah Ochoa

After a tough loss on the road, the UC Santa Barbara men’s basketball team returned home to the Thunderdome on Saturday to defeat the University of Pacific 82-71. Graduate and sophomore guards Ajare Sanni and Ajay Mitchell led the offensive attack with a combined 41 points. 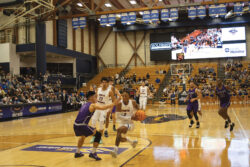 The Gauchos won the tipoff and broke the scoring open with a layup from Sanni. However, the Tigers kept it close by making five out of 10 3-pointers and forcing eight turnovers.

Fortunately, UCSB ran away with a lead after a TV timeout going on an eight-point run. UCSB went into the half leading 37-29 after senior guard Josh Pierre-Louis scored a buzzer-beater.

Going into the second half of the game, the Gauchos continued their momentum by increasing their lead to 11 points. However, Pacific forced turnovers and fouls to try and claw back into the game.

However, after shortening the lead to 5 points with 7 minutes remaining, the Gauchos proceeded to go on a 9-4 run in 4 minutes, making the score 73-61.

When the clock finally hit zero, the Gauchos maintained their lead by winning 82-71. The players of the game were Sanni and Mitchell. Sanni led the team in scoring with 22 points and 3 steals. Mitchell bounced back from Tuesday, scoring 19 points while making all 3 of his 3-pointers while shooting 73%.

Other notable Gauchos were graduate forward Andre Kelly and Norris. Norris continued his scoring ways from the first half, finishing with 18 points. Kelly made his presence known by recording 11 rebounds, four being offensive. Kelly also scored 11 points giving him the only double-double of the game.

After the game, we talked to coach Joe Pasternack about the early free-throw struggles. Pasternack stated, “We came here this morning at 9:20 a.m. And each guy was at a basket, and they shot for about five minutes while the other guys on the team watched film and then we flipped it. And so I don’t know what the answer is because we have really, really good shooters. And we got to be able to make free throws because in close games in conference play, we’re not winning — shooting 9 for 18, 50 percent. And I’m talking like Andre Kelly is a really good shooter. Ajay is a really good shooter. Calvin’s a really good shooter. Cole Anderson is an elite shooter 0 for 1, you know. So I don’t know if it’s mental, if we’re tired, or legs tired, or whatever it is, but we’ll just keep doing it. And we’re not worried because I know we have great shooters.”

The Gauchos play on Saturday, Dec 10, but on the road at Pepperdine University, where tipoff is set for 5 p.m.