The Daily Nexus
Volleyball
Women’s volleyball goes 1-1 at home on the week
December 2, 2022 at 8:43 pm by Isaiah Ochoa

On Nov. 22, the Gauchos hosted California State University, Northridge, sweeping them in three sets during Thanksgiving week. The scores of the three sets were 25-19, 25-20 and 25-18 in favor of the UC Santa Barbara women’s volleyball team. 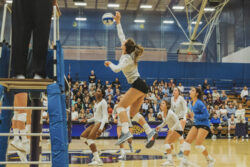 In set one of the game, UCSB rolled out with their usual starters to set the tone early. The Gauchos’ game plan worked as the game was 7-2 early on for the Gauchos. Senior setter Megan Shimoda looked to provide a spark as the first one off the bench.

Shimoda did just that, helping score 2 points to make the score 9-2, as she served an ace and assisted freshman right-side hitter Julia Shepherd on a kill.

It’s an understatement to say that the Gauchos controlled the whole first set. At no point during the first set did UCSB look flustered or nervous.

The CSUN Matadors did attempt to make it interesting with a run that cut the lead to 3 points on multiple occasions. However, the Gauchos were so in sync that they scored the final 3 points to secure the first set.

Going for the sweep, the Matadors were not trying to go home early or without a set win. CSUN was keeping it close, with the third set being tied midway through at 11-11.

Unfortunately for the Matadors, the Gauchos pulled away with 6-straight points, making the score 17-11. UCSB clinched the sweep by winning 25-18.

The Gauchos continued their homestretch at the Thunderdome by hosting the University of Hawai’i on Nov. 25 for their home finale. The matchup was an exciting one where it went to a 5-set nail-biter going Hawai’i’s way.

In the first set, UCSB came out of the gates hot again by taking an early 5-1 lead. However, Hawai’i would not go down without a fight by tying the score at 23-23. Fortunately, the Gauchos prevailed with the help of senior right-side hitter Tallulah Froley and junior outside hitter Michelle Ohwobete on back-to-back kills.

In the second set, Hawai’i continued to put together good runs of play leading to an early 8-4 lead. It was evident that the Rainbow Warriors did not want the Gauchos to gain more momentum, causing them to make only 5 errors in the set. Hawai’i would eventually win the set 25-20, tying the game.

Hawai’i continued their momentum for the third set by going up 13-5. UCSB wasn’t going down with a fight, as they battled to 24-24. The Gauchos secured the third set 28-26 with 3-straight points thanks to an ace and kill from sophomore middle blocker Niableu Correal and a kill from junior right-side hitter Tasia Farmer.

Going into the fourth set, the Gauchos looked to secure the win while Hawai’i tried to force a fifth set. The set went point-for-point as the score was 13-12 in favor of Hawai’i, before their run. After UCSB scored a kill from UH junior outside hitter Kendra Ham, Hawai’i went on a run to make the score 23-15 at one point. Hawai’i successfully forced the fifth set, winning 25-18 in the fourth.

In the final set, no team gave leeway as they went point-by-point again. By the middle of the set, the score was all tied up 7-7 until Hawai’i’s freshman outside hitter Caylen Alexander had something to say about it. Alexander scored back-to-back kills to give Hawai’i the lead, and they never looked back.

UCSB tried to cut the deficit but errors propelled Hawai’i to the 15-11 victory.

UCSB finished its season with a 20-10 record and a 16-4 record in the Big West Conference. With this loss, the Gauchos said goodbye to their seniors: Froley, Shimoda, setter Mehana Ma’a, outside hitter Sophie Messinger, middle blocker Kristina Pepek and middle blocker Deni Wilson.