The Daily Nexus
Sports
The Gauchos make their first fall on the road
November 22, 2022 at 11:16 am by Gabriel O'Brien

The UC Santa Barbara men’s basketball team falls to 2-1 on the season as they lose to the Northern Arizona Lumberjacks in their first away game. 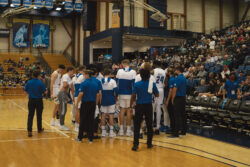 After more than two scoreless minutes following the tip-off, the Lumberjacks started off the scoring with a 3-pointer by redshirt senior forward Nik Mains. This opening shot set the tone for the Lumberjacks for the rest of this game, in which 18 of their 63 points — or 29% — came from 3-pointers.

For the entire first half of the game, the Gauchos kept it close with solid defense and consistent offensive performances on the whole. On the defensive side, Gaucho graduate student and forward Andre Kelly earned 4 rebounds in the first half alone, with 7 total on the game. On the offensive side of the ball, sophomore guard Ajay Mitchell put up 7 free throws. Mitchell would put up 18 points that night — leading the team — but the scoring was spread out around the squad for the first half. Unfortunately, there were no standout performances. The Gauchos would only score one 3-pointer in the first half, compared to four from the Lumberjacks. With just over four minutes left in the first half, the visiting Gauchos had a 19-18 lead on Northern Arizona University (NAU). However, the Lumberjacks scored 8 points that remained unanswered when the time expired, and this aggressive shooting skewed the score in the first half in favor of the home team.

The halftime seemed to be a refreshing one for the Gauchos, though, and there was some renewed hope for the away challengers, as they reclaimed the lead of 27-26 with 8 unanswered points of their own — four of which were scored by senior guard Josh Pierre-Louis, who would go on to have a stellar 17 by the time the night was over. However, the lead for the Gauchos was short-lived, as junior guard Jalen Cone and redshirt sophomore forward Carson Towt combined to put up 10 of 12 straight points for the Lumberjacks — forcing UCSB to dig themselves out of a double-digit deficit, with the score at 27-38 with only 11:07 remaining.

As only about a half of the second period of play remained, the Lumberjacks maintained their lead with a strong offense and an aggressive defense that was not afraid to foul. For the remainder of the time, the Lumberjacks put up two more 3-pointers, several layups and a dunk — as well as 10 personal fouls. While the Lumberjacks defended their lead, the fouls slowed down any last ditch efforts that the Gauchos could possibly make happen with measly 1-point free throws. Indeed, 21 of the Gauchos’ 54 points were at the free throw line, which says something about the static tempo of the game and the difficulty that UCSB faced on the road.

The final score this Friday was 54-63 in favor of the NAU Lumberjacks. Guards Mitchell and Pierre-Louis combined for 35 points. The 6-foot-10-inch senior forward Miles Norris put up two 3-pointers with a total of 11 points for the night. Norris is new to the Gaucho squad, having played before for the University of Oregon Ducks and starting his college career with the City College of San Francisco Rams. While the loss is a setback for the Gauchos, the team had some strong performances to be proud of going forward in the season.

I made $18,000 this month operating on line from domestic. I am a full-time scholar and most effective paintings 6 hours a day. Z20) Anyone can effortlessly do that task from domestic and earn on line on the identical time.
factor examine this article… http://quickpay24.blogspot.com

I have made 350bucks reliably in 0ne day.That was my ideal day in my life and my b0ss was to a great degree content with me..CNN is additionally awed from my w0rk and is outstandingly happy… http://payoptions1.cf