The largest strike in higher education history is continuing this week with support from UC Santa Barbara community members and faculty and California political leaders. 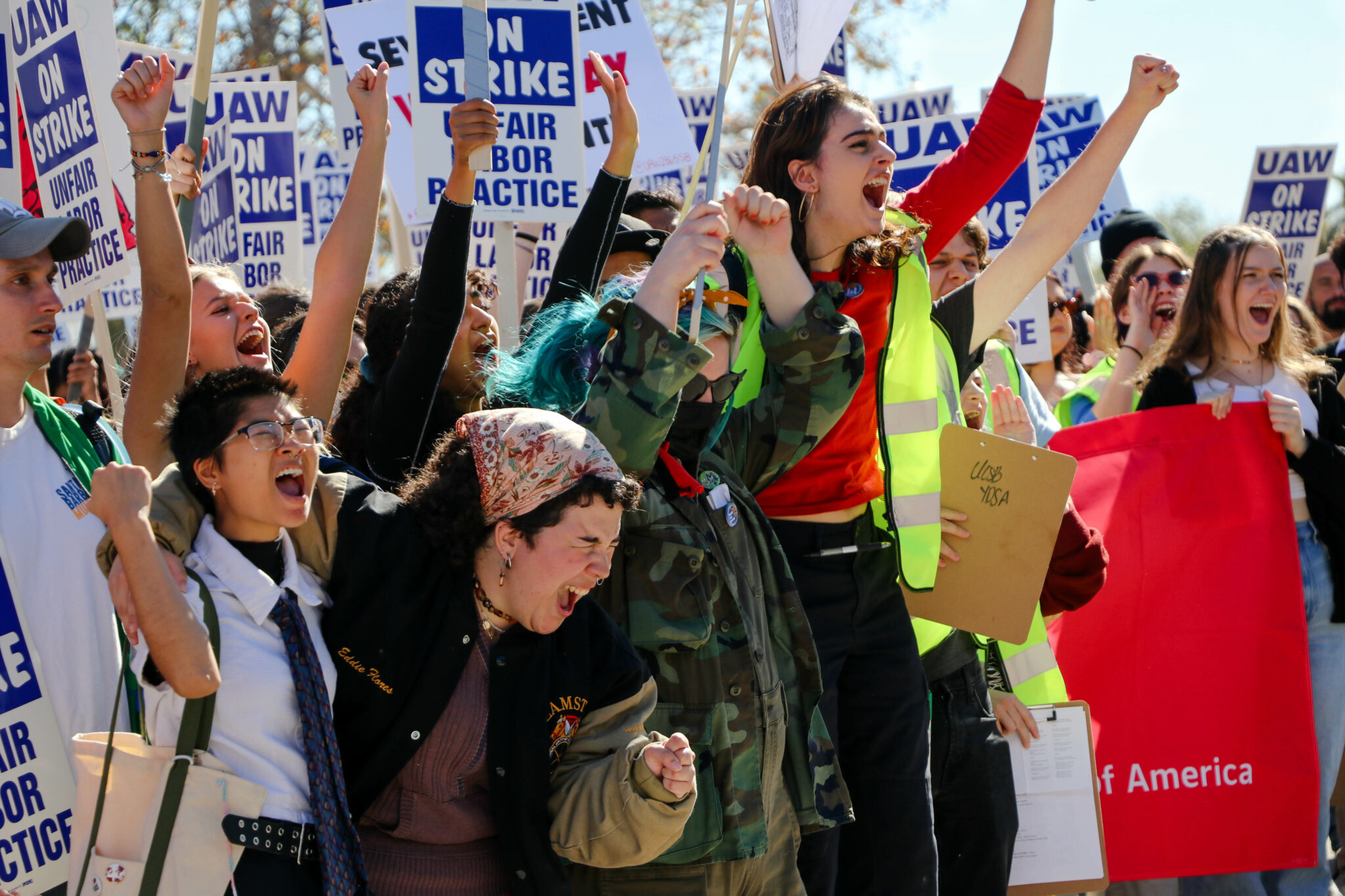 Academic employees across all ten University of California campuses are withholding labor, picketing and marching through campus in response to 30 alleged unfair labor practices on the part of the UC, including failing to bargain in good faith with union members under the United Auto Workers (UAW) union.

Picketing at UCSB continued through the third day of the strike, with striking workers and supporters gathering under Storke Tower on the afternoon of Nov. 16 to hear from speakers and inform community members about the strike efforts.

Union members — who are demanding increased wages to alleviate rent burden and support high cost of living — said that the UC Office of the President (UCOP) reached out with bargaining propositions containing “incremental improvements” to UAW 5810 and Student Researchers United (SRU) since the strike began.

“Our fellow bargaining units … have received some bargaining updates that have been incremental improvements. The TA union has not and we’ve currently been waiting for them for three days to come back and bargain with us,” said Misa Nguyen, a doctoral candidate and teaching assistant in the history department.

UCOP Spokesperson Ryan King maintained in a statement to the Nexus that the UC has bargained in good faith and “believe[s] that the best path to an agreement is with the aid of a third-party mediator.”

“The University of California continues to negotiate in good faith as we do everything possible to mitigate the impacts of any strike on student learning and our research enterprise,” King said.

The UC said it has “enhanced” its offer to UAW in terms of pay increases and paid leave.

Nguyen said that the strike — which was authorized by an overwhelming 97% yes vote from union members — was prepared to go on for as long as necessary to force the university into good-faith bargaining for their demands, which include significant raises for union members to alleviate rent burden.

“Morale is honestly still super great, which has been really exciting to see. And people are still in for the long run, because we’re not burning out, but we also expect to stay out here for another month if we have to,” she said.

The three striking unions — UAW 2865, UAW 5810 and SRU — along with the California Labor Federation called for a cancellation of all on-campus events for the duration of the strike.

“The California Labor Federation has sanctioned the strike and is asking all elected officials to respect the strike sanction by canceling speaking engagements and meetings on UC campuses until UC ceases its unlawful behavior and settles fair contracts,” the union statement read.

Viviana Valle, a doctoral student in the feminist studies department, picketed on Wednesday and said she anticipates that the strike movement will only gain momentum.

“I think every day we just get stronger. Every day I’ve been noticing more and more people showing up. I think that’s a matter of spreading the word and more people really understanding what we’re fighting for in an unfair labor practice lawsuit,” she said. “We’re just trying to spread information and [get] more people on to the picket line, which has been working.”

“In the spirit of our department’s activist ethos, we will cancel sections and alter or revise graded assignments in solidarity with striking teaching assistants for the duration of the strike,” the department of Chicana and Chicano studies said in their statement.

The global studies department said in their statement that they would be “prepared to consider additional actions” to support their graduate students, including but not limited to communicating with undergraduates about the strike, withholding grades or canceling classes.

Global studies associate professor Jia-Ching Chen was one of dozens of faculty members that rallied on Monday in support of striking workers.

“The cost of public education higher education … has run way out of pace from basic working people. This is an issue that affects faculty and students and the community alike,” Chen said. “This is a key moment in which to push many demands that come together around the basic principle of accessibility to higher education.”

“As a proud Gaucho, I stand in solidarity with the student researchers and academic workers who are taking a stand for better wages, benefits, and working conditions by striking at UC campuses across our state,” Carbajal said in the statement. “Their hard work deserves the respect and fair contract for which they are fighting.”

The UC Student Association (UCSA) President Alex Niles issued a statement to the Nexus on behalf of UCSA, urging undergraduate students to support the strike cohort.

“Undergrads should act in solidarity, including by showing up to the picket line and not crossing the picket line to go to class,” the statement read. “The strike is in undergrads’ best interest. Their working conditions are our learning conditions. Morally, all UC workers deserve a living wage and it’s disgraceful to the UC that it is not paying one to academic workers.”

Niles said that “TAs are the core of the undergraduate educational experience” who go above and beyond for students “while being underpaid to the point of not having enough money to cover their basic needs.”

My Companion mother makes 50 bucks an hour on the PC(Personal PC). She has been out of w0rk for quite some time however last month her check was 11,500 bucks only w0rking on the PC(Personal PC) for 9 hours per day.
For more detail visit this article.. https://part-time-work2.blogspot.com/

Teaching assistantships are temporary jobs. Not all grad students get them and professors may have to “go to bat” to ensure their protege receives a TA-ship for a particularly academic year. If a TA does not run section, give quizzes, take attendance, and fails to generate a grade for their quotient of students because they are striking over a job they hold temporarily for 1-3 years what are their chances of receiving another appointment?–of completing their degree? Will the UAW be there to negotiate for them at the faculty meeting when TA assignments are made in the summer? Who is… Read more »

>Not all grad students get them and professors may have to “go to bat” to ensure their protege receives a TA-ship for a particularly academic year. This is not even remotely how TA-ships are allocated. Most professors don’t even know who will be TAing for them before the contracts go out. >they are striking over a job they hold temporarily for 1-3 years No. PhD programs take at the very least 5 years. Average time-to-degree is 7-8 years. >Will the UAW be there to negotiate for them at the faculty meeting when TA assignments are made in the summer? Again,… Read more »

Anyone who has to work as a TA for their entire graduate career is in real trouble. Graduate students need time to complete their dissertations. They need support in the form of tuition waivers and fellowships. How exactly do you think TA-ships are assigned? Does everyone just get one? Does the UAW ensure you can have one if suddenly your name is not on the list? Let’s assume student evaluations are a small part of the equation. What sort of evals are TA’s going to receive if their students get no grades and cannot graduate? According to you; students are… Read more »

Do you know what a strike is, Peter? Withholding grades is SUPPOSED TO BE DISRUPTIVE! That’s the entire point. That is our leverage in order to improve grad conditions for TAs, RAs, and those on fellowship (which is based on the average TA salary).

So, you attempt to improve graduate student conditions by making sure the undergraduates suffer. Just spectacular reasoning.

By the UAW demands, my TA would receive $207 per hour. Rather than chant the irrational trope “all should get 54K” (or whatever the desired pay), perhaps pay TAs by the hours they actually work. If that model had been adopted back when TAs in the Humanities were being abused by their departments, we would not have the graduate student “solution” of inviting onboard the UAW to make demands consistent with their knowledge (sic) of the manner in which academia functions. BTW: As per a previous post, it would be a pleasant happening if professors actually devoted a little more… Read more »