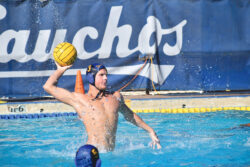 Coming off an overtime win against the top-seeded University of the Pacific, the Gauchos hope to end their regular season and enter the upcoming Golden Coast Conference tournament with confidence.

The Gauchos’ position to succeed in the playoff tournament hinges on the team’s performance against Pepperdine, as well the results of the matchup between California State University, Long Beach and UC Irvine.

The top-two seeded teams after Saturday’s slate of games will earn a first-round bye: a highly sought-after week off from water polo to rest and prepare. UCSB currently sits in a three-way tie for the No. 1 spot in the conference with Pacific and CSU Long Beach, but the Gauchos are ranked third of the three teams because of their low goal differential.

Pacific has already claimed one of the top two spots with its Nov. 11 victory over San José State University. However, if UCSB defeats Pepperdine and CSU Long Beach falls to UCI, the Gauchos will claim the second seed.

Although the Gauchos have won three straight games, securing a first-round bye will not be easy. Pepperdine is the team’s rival, and while UCSB won 16-13 against the Waves in 2021, matchups between the two teams usually carry an extra layer of ferocity.

​”[UCSB and Pepperdine] historically do not like each other, and there have been very physical games in the past with each other,” Hawkins said. “Especially because it’s their senior day, they’re going to be fired up for the game, and we’re just going to match the intensity.”

The Gauchos will face off against Pepperdine in Malibu at noon.